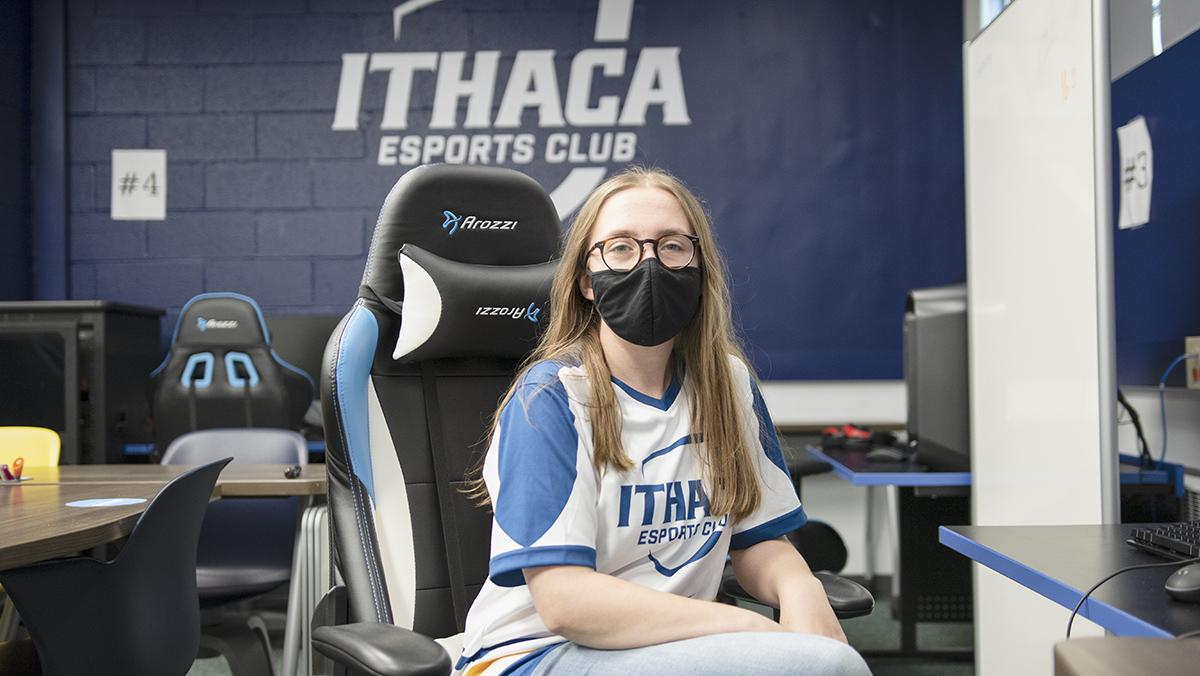 Eleanor Kay/The Ithacan
Senior Mary Turner urges the college to reconsider allowing the esports club to participate in first-person shooter games because they allow for a safer and more diverse environment for female or female-identifying players.
By Mary Turner
Published: September 29, 2021

On May 24, 2016, Blizzard released the game “Overwatch,” one day after my 15th birthday. Knowing that I was really into gaming, my uncle bought it for me. At 15 years–old, in season two of the game, I was able to climb to the Platinum rank.

I averaged around Gold for the following seasons. Some of my favorite characters were Mercy, a field medic who uses a staff to heal her allies; Mei, a climatologist who uses frost beams and cryo-freezes herself for healing; and D.VA, a 19-year-old gamer who pilots a mech.

“Overwatch” is a team-based, first–person shooter (FPS) game. When many hear “FPS game,” they think of violence, blood splattering everywhere and guns. “Overwatch” took a different approach to this standard. Mercy, Mei, and D.VA are some of the many characters in the game that do not use guns as their weapon. As a 20-year-old college student, I am not allowed to play any “shooter” games competitively within Ithaca College Esports due to a fear of gun violence. Fear of gun violence and the association of FPS games is a perspective I understand, but is outdated in competitive esports. I am frustrated that our organization has provided multiple studies reporting little to no connection between aggressive behaviors and violent video games. Even with reports showcasing video game spending per capita in relation to gun-related murders, our demands for these games are brushed aside.

“Overwatch” and other FPS games like “Valorant” promote communication and team skills that are valued in the workplace. These skills are also developed when playing with an athletic team. Without a safe competitive platform, students are unable to efficiently develop these skills when playing games alone in their dorm rooms.

One of the beautiful aspects of gaming is that the “physical barriers” often brought up in sports are eliminated. But that doesn’t change the fact that I will be harassed for being a woman playing video games. If I have a more “feminine” username I receive threatening messages from both enemies and allies. If I unmute my microphone, I am told to “shut up” or “play support” because I sound feminine. No matter how old I was, I developed a fear of speaking in the team chat. Instead of making important calls, I would type in the chat, which is like texting a teammate during a match.

“Overwatch” is not the only game that has these issues. Sophomore Fiona Loray-Moran is interested in playing “Valorant” and “CS:GO” and has reported similar experiences in these games. Collegiate esports have zero tolerance for that behavior and lets us play without being harassed.

I am not saying we should get rid of these other games due to their lack of diversity, but we should offer more competitive platforms for an accurate representation of our student population. According to the college’s Office of Analytics and Institutional Research, 59% of students reported their gender as female and 41% reported their gender as male. On the contrary, the competitive rosters reported 75% use he/him pronouns and 10% use she/her pronouns.

This isn’t just an esports problem, equal representation is discussed across all fields. But when we offer a solution to representation in our organization and are shut down because of misunderstandings surrounding video games, it is hard to understand why we are being denied. Being allowed to play these games on campus would give me and other female-identifying gamers the opportunity to make friendships and play these games with the support of each other instead of the constant harassment we typically face.