Commentary: Free transport is imperative for a thriving Ithaca 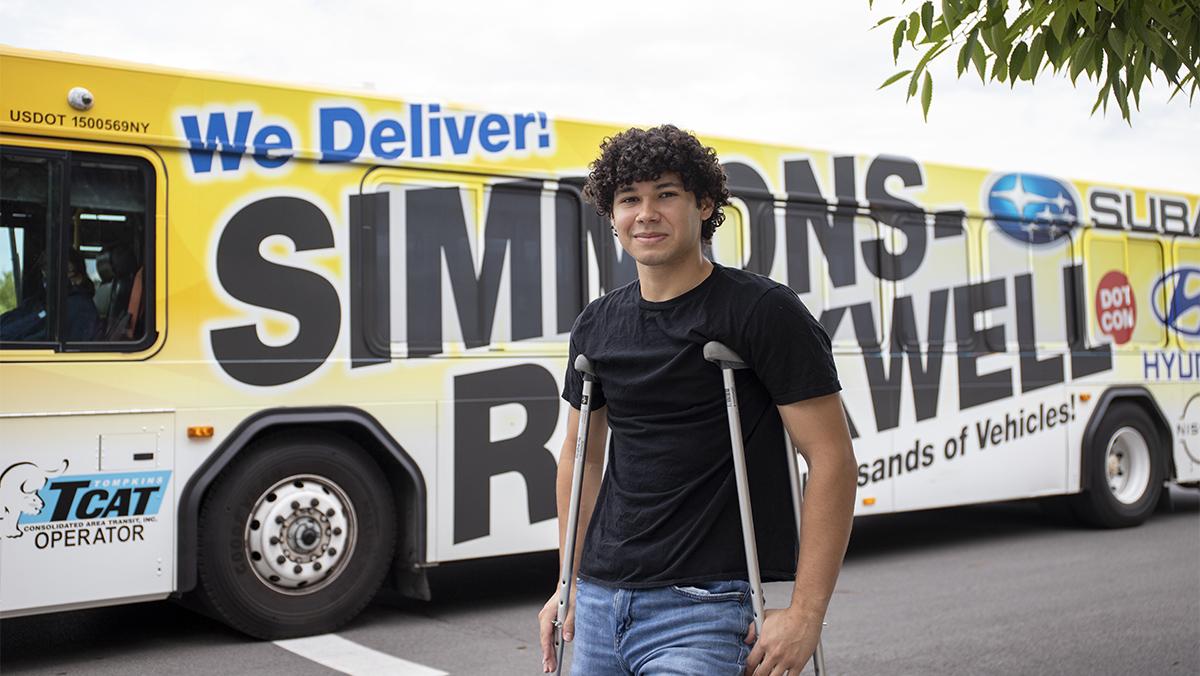 Eleanor Kay/The Ithacan
Senior David Florentin believes that the Tompkins Consolidated Area Transit should be free for all Ithaca students and residents. He is working with the Ithaca chapter of the Democratic Socialists of America.
By David Florentin
Published: September 7, 2022

The City of Ithaca prides itself on its inclusivity and diversity, yet it’s falling behind in an area that much of the population relies on: transportation. Ithaca College is certainly no exception to this. There are many barriers in using Tompkins Consolidated Area Transit (TCAT) service, the main mode of public transit in the Tompkins County area.

For the off-campus student and worker community, public transportation is a necessity. With only one TCAT route (Route 11) and sparse stops around campus — five in total — someone on crutches (or with any mobility disability) would have to go far out of their way to be able to get home, let alone into town for basic needs such as groceries or a job. After arriving a minute late, one would find themselves waiting an hour for the next bus. Sparse stops and limited hours on campus contribute to inaccessibility.

This is all nice in theory, but how do we do it? We organize. I love Ithaca for many reasons; the involvement and action people take here is particularly special. FreeCAT, as such, is an initiative that is quickly gaining traction across our community. Its goals are simple: free fare transit and expanded service in the Ithaca area.

The benefits are numerous, from ecological to socioeconomic. In the case of our college, it will provide a feasible alternative for students who might pay up to $500 per year for parking passes. It would also allow the off–campus community — commuters and upperclassmen alike — greater accessibility to their own college, especially considering rising gas prices and limited parking on campus. If students use public transit more often, more parking will be available for those who don’t, and students who do will save a significant amount of money.

How could free transit be feasible? The Transportation Agreement set by the City of Ithaca, Tompkins County and Cornell University at the inception of the TCAT states how funds are managed. The three institutions agreed to an even three–way split for the funding of TCAT. It is no surprise for many of us that Cornell isn’t holding up their end of the bargain. One demand of FreeCAT is to hold Cornell accountable to the agreement they had with our governing bodies. Cornell benefits from low-wage labor from their campus staff, and so, to contribute additional funds to TCAT would help raise the standard of living for many of its employees by providing them with a livable wage. An estimated 75% of TCAT’s ridership is the Cornell community! Just to add the cherry on top, Cornell’s endowment, which they only use 5% of, is $10 billion compared to the City and the County’s $65 million and $100 million respectively.

A major obstacle when considering fare-free public transportation, however, is the driver shortage that recently forced TCAT to cut service. The FreeCAT campaign is actively including the voices of drivers, and the problem seems clear: wages and working conditions. It is not unusual for drivers to work 13–hour days (often with a four-hour break in the middle of the day), and overtime is all but mandatory, leading to six-day weeks. Raising wages and improving these conditions are realistic strategies in addressing the shortage.

Currently, the TCAT board of directors is in discussion with its labor union, UAW 2300, and the Transportation Agreement is also set to be renewed and discussed in both city and county legislatures. All of these things are up in the air, but at the end of the day, fare-free transit is something most people in our community support.

How can you help? Raise your voice, and don’t stop your activism after you’ve reposted a couple of posts on Instagram. Participate, organize, and discuss these real issues both you and I face. Sign petitions, go to the City’s Common Council meetings, go to the county legislature meetings and demand FreeCAT!

Recently, we learned about the proposed American Energy Infrastructure Jobs Act of 2012 (H.R. 7). This legislation would eliminate dedicated federal fuels taxes for public transit for the first time in 30 years. Since 1983, nearly half of all public transportation funding has come from the federal motor fuels taxes. This funding structure has provided…