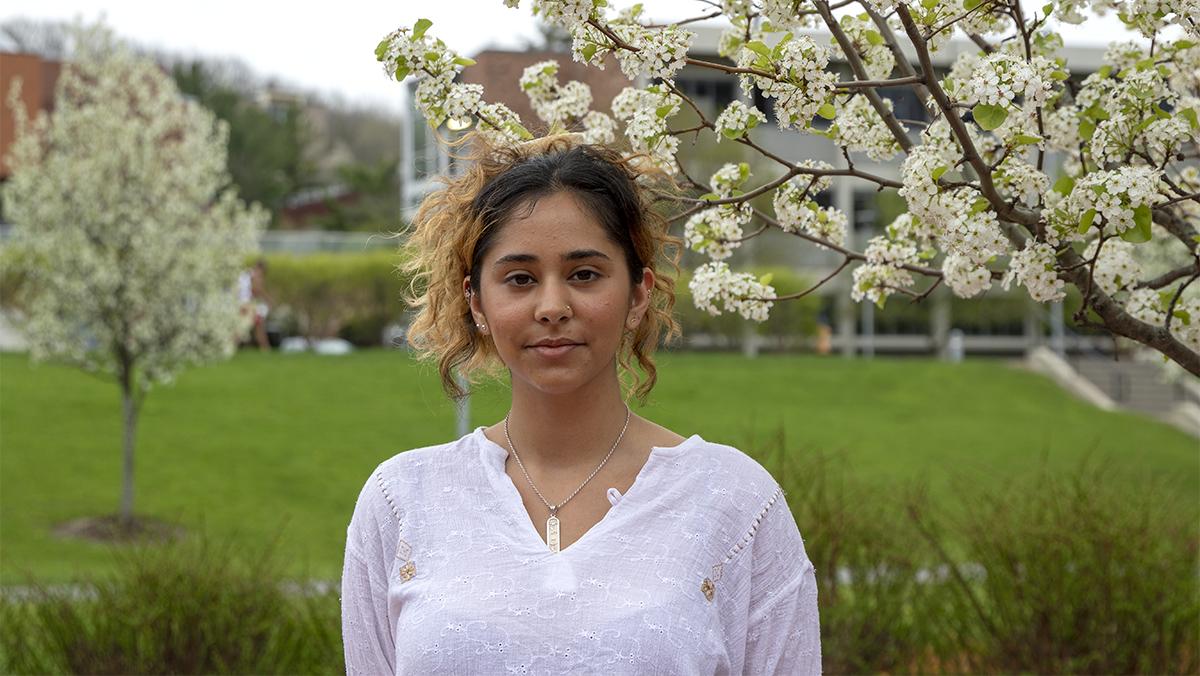 Nolan Saunders/The Ithacan
Senior Zahra Sandhu, opinion editor for The Ithacan, reflects on the realities of today and how it is helpful to factor the past into the present while moving toward an informed future.
By Zahra Sandhu
Published: May 12, 2022

We are living in times of war, pestilence, death, government bans on our bodies, and expectations to either match or succeed the productivity of economic exponential growth. When our bodies no longer operate as bodies but rather as vessels moving through the delusions of the everyday, how are we expected to live without acknowledging the despair constantly demanding our attention, continually shocking our bodies awake? Why do some have to fight a war in order for us to live?

Why must poverty mean our economy is working? We can say it’s the luck of the draw, the lottery of birth. But that doesn’t tell us anything.

Life in the midst of death is hard to reconcile. But we can try.

I turn to the tangible when faced with the existential: art, writing, theory and music are not clichés when searching for an understanding — to find a pattern in the disorder of today.

Decoding the patterns of each historical moment we are forced to live through and the ones that have come before us is an unveiling of the fragmented human before it can make us whole: “The starting-point of critical elaboration is the consciousness of what one really is, and is ‘knowing thyself’ as a product of the historical processes to date, which has deposited in you an infinity of traces, without leaving an inventory … therefore it is imperative at the outset to compile such an inventory.” And life is little more than figuring out what this inventory is. This quote is from Antonio Gramsci, in his Prison Notebook, and begs the questions: What are these traces? Who and what is stabbing at me? Who and what is it I am stabbing at? Who and what stabbed those stabbing at me? We have been recruited to fight wars that we don’t know we are fighting.

One way we can start understanding today is by looking back to yesterday. Once we gaze into the past, we start combating an erasure of history and imagining a tomorrow; we start to see where an individual’s freedom is accessed. I think of this as the process of undoing, and in this we are tasked in not forgetting.

I come up against the same questions of battling futures in Thucydides’ “Melian Dialogue.” The Melians refuse to join the Athenian empire. In urgency, the Athenians attempt a persuasive conversation of submission. The Athenian’s claim that 1. justice only applies when the opposing parties are equal and 2. when there is an inequality of power, justice is irrelevant and only power matters. The Melians see their options as either war or slavery, and their motto might suggest “Live Free or Die.”

Jose Muñoz’s seminal text “Cruising Utopia: The Then and There of Queer Futurity” suggests a way forward: “To participate in such an endeavor is not to imagine an isolated future for the individual but instead to participate in a hermeneutic that wishes to describe a collective futurity, a notion of futurity that functions as a historical materialist critique.” Muñoz recognizes that freedom is potential itself.

History shows that birds must fly, hunter gatherers must move, and modernity must invest. The next step is for the imagination to imagine: the potential to imagine liberation and not assimilate to the hard edges of the definitions we are allowed. When the collective pushes for utopian possibility, freedom in today is found.

In times of overwhelming despair, we must try to reimagine life in the midst of death.

Editorial: Removal of mask mandate is rushed and poorly timed

Commentary: In times of crisis, supportive reflection is vital