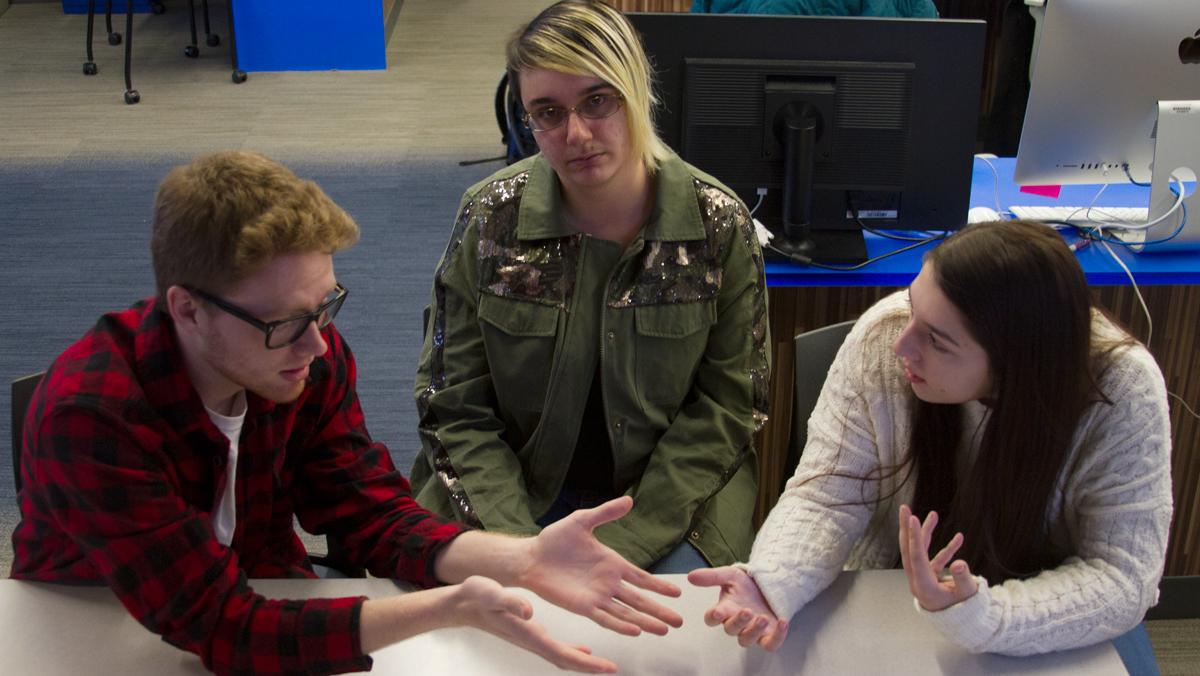 When I saw the call for interviews from The Ithacan on the topic of mansplaining, I was quick to volunteer. Only a few hours earlier I listened to a colleague ranting about how mansplaining was sexist to men. Yep, I had been thoroughly mansplained about mansplaining. It was another moment at this school where a man refused to think critically about the way power structures are formed through gender. Instead, he tried to shut down conversation by painting me as the insensitive one.

High off the frustration of this conversation, I decided talking about my experiences and having them in the school paper would be necessary, but it wasn’t merely the fury of mansplaining itself that had me so ready to talk. I thought my experiences could help broaden understanding of mansplaining, since I am a nonbinary trans person.

We tend to understand most feminist issues as man versus woman, or at least the patriarchy versus woman. What is then left out of the conversation is nonbinary people. Of course, the conversation becomes more complex here: if a nonbinary person is still viewed by the outside world as either feminine or masculine, their gendered oppression may vary. Having them in the conversation and expanding it to include them is still necessary, though. Mansplaining especially will hit us constantly. With every nonbinary person I speak to, I hear anecdotes of some gender studies–hating man (sometimes online, sometimes in the grocery aisle, and sometimes in the classroom) refusing to acknowledge that gender is more complex than “what is between your legs” and “limited to two options. “ When our very identities are being mansplained to us, it once again reminds us that the world will be openly hostile to us for merely existing.

Because here’s the thing. When we talk about the patriarchy hating women, that’s just one facet of the conversation. Really what the patriarchy hates is deviation from the norm. The patriarchy loves women when women stay subordinate, unquestioning, and continue to uphold men as the standard of our society. The patriarchy also loves everybody staying in these defined boxes, boxes that nonbinary folks are breaking down. Many of us are even trying to light the boxes on fire.

So when I saw that the article I’d been quoted in had specifically referenced women in the title, I already felt a bit uneasy. Sure enough, as I was quoted, the fact that I had once upon a time identified as female was used to bolster the argument that I had been mansplained to. Seeing those words frustrated me not only because my gender was being invalidated but also because my initial goal had been unsuccessful. No awareness of mansplaining affecting nonbinary had been highlighted. Rather than getting angry at The Ithacan or feeling hopeless, however, I decided to double down on my cause. If being quoted in an article hadn’t broken any barriers, perhaps some writing of my own would.

In my women’s and gender studies classes, questions and conversations are constantly posed of how women are oppressed. It often comes down to me and my fellow trans classmates to raise our hands and say, “Here’s how it affects trans people too.” Responses will range from “Oh, that’s interesting” to “Oh, that’s complexing the issue too much,” yet nonbinary and binary trans people make up a high population percentage on Ithaca College’s campus. So in gender studies classrooms, how can trans experiences not be inherently included?