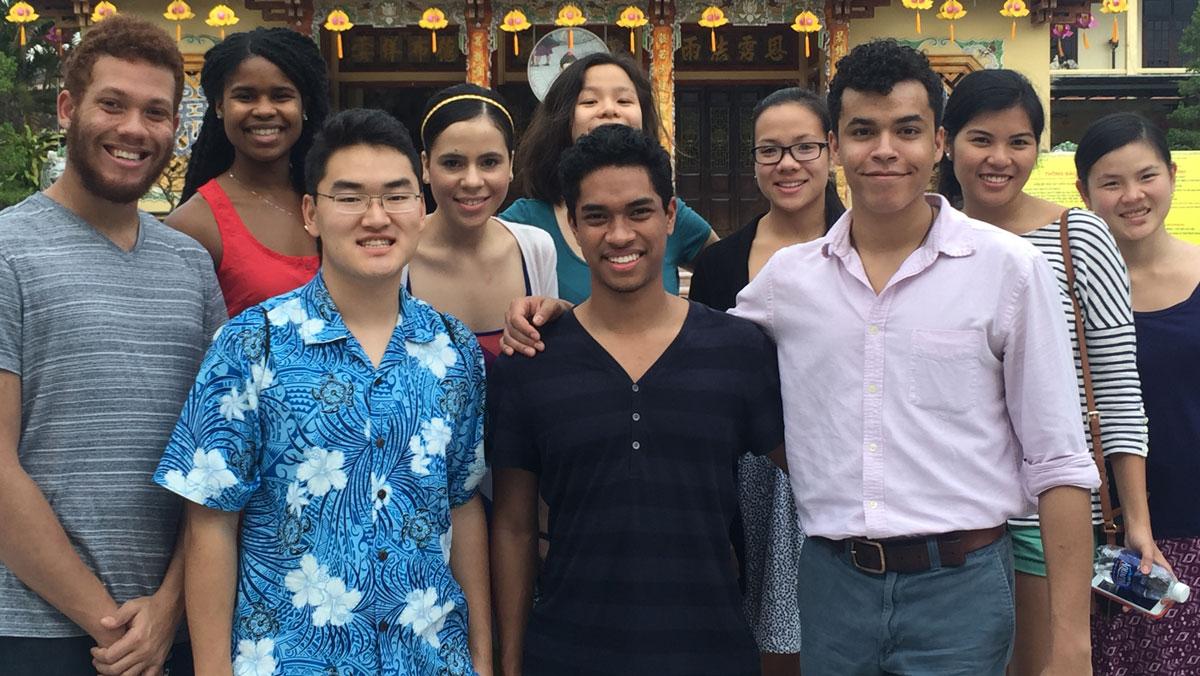 Courtesy of Ciara Lucas
Junior and senior MLK Scholars traveled to Da Nang, Vietnam, over winter break with a focus on the relationship between the U.S. and Vietnam and community service.
By Ciara Lucas
Published: January 26, 2016

From Jan. 5–14, the junior and senior MLK Scholars traveled to Da Nang, Vietnam, for what turned out to be a perspective-altering experience for all of us.

Da Nang is Vietnam’s bustling metropolitan city with a population of about 1 million people. Its streets are filled with people riding motor scooters, shop owners and entrepreneurs hustling to sell their goods. But Da Nang is also known for having one of the highest contaminations of toxic pollutants from the use of Agent Orange, a chemical sprayed across the country by U.S. forces during the Vietnam War as part of its herbicidal warfare program. Although the Vietnam War ended in 1975, to this day thousands still suffer from this poison which causes birth defects, cancer, and other illnesses, now reaching its third generation of victims.

On day three of our trip, we visited the homes of two families living and struggling to cope with the affects of Agent Orange. As we arrived to the first home, we immediately encountered family members with noticeable deformities. A seemingly young woman had a large tumor on her back in the shape of a hump that weighed her down. A mother holding her three–year-old son had small tumors growing all over her body, covering most of her arms, legs and face. The boy was just starting to grow tumors of his own. We stood outside of their small, run-down house and spoke with the grandmother and mother of the family. For about an hour we listened to them tell their stories with tears in their eyes. Agent Orange had poisoned their family after the eldest man of the family fought in the Vietnam War. Agent Orange spreads to the DNA, causing a long lineage of poisoned ancestry.

It was not until 20 years after the war that the U.S. government accepted responsibility for the widespread contamination and destruction of the people and land in Vietnam.

This global injustice was new to me, but it is not new to the millions of U.S. citizens that heard Dr. Martin Luther King Jr. publically condemn the Vietnam War. He encouraged the rest of the country to do the same in 1967, one year before his assassination.

We recognize Dr. Martin Luther King Jr. as a major leader of the Civil Rights Movement, creating essential social change through his method of nonviolence. But what is frequently overlooked is his unpopularity toward the end of his life due to his opposition to the Vietnam War. On April 4, 1967, exactly one year before King was assassinated, he gave his first public address on the Vietnam War. In one of his final speeches titled “Beyond Vietnam,” King addressed the nation and urged a ceasefire, describing the war’s fatal effects on both America’s and Vietnam’s poor. King announced it was morally imperative for the U.S. to take immediate steps to end the war through nonviolent means. The immediate response to King’s speech was widely negative. Prominent news outlets like the New York Times and the Washington Post published editorials criticizing King, claiming he had a flawed view of the situation and had ultimately diminished his cause. Even the National Association for the Advancement of Colored People accused King of attempting to link two dissimilar issues, Vietnam and civil rights.

King shifted his focus from black rights and poor people’s rights to recognizing the intersectionality of social injustices happening in our nation and abroad. By the time he was assassinated, he had lost a very substantial amount of his supporters and was considered a radical threat to America, far from being viewed as the celebrated man that we honor him as today.

The pain and suffering that is happening in Da Nang, Vietnam in 2016 is precisely what Dr. King was trying to avoid.

My opportunity to look up close and personal at history is something that I will never be able to forget. It is now up to me, up to all of us, to decide what we will do with this new knowledge and perspective in order to combat global injustices that Dr. King tried to expose to the American people nearly 50 years ago.

Ciara Lucas is a junior journalism major and MLK Scholar. Email her at clucas1@ithaca.edu.