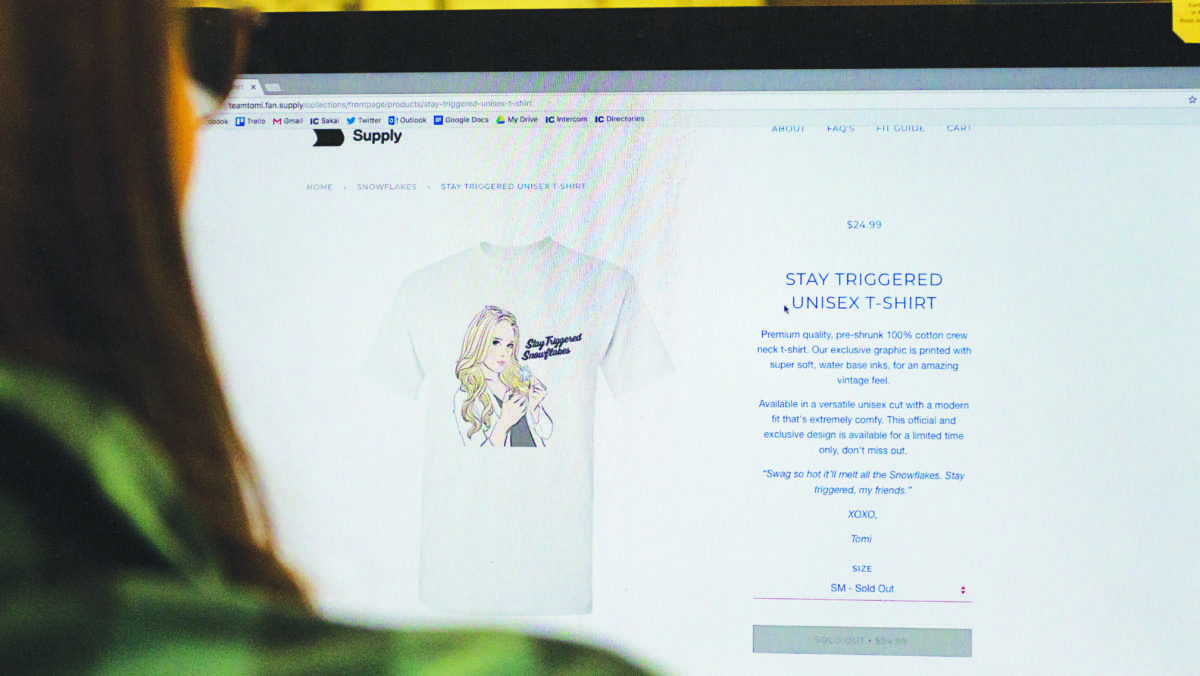 While scrolling through Facebook the other day, I came across an ad for well-known conservative political commentator Tomi Lahren’s clothing line. Torn between not giving her the satisfaction and my own curiosity, my interest won over. I clicked on the link to her website and found a collection of T-shirts, tank tops and trendy Dad hats embossed with the phrase “Stay Triggered, Snowflakes” in polished cursive writing. Underneath, in bold letters, read the words “SOLD OUT.”

I’ve been dealing with mental illness my whole life. Over the years, I’ve worked with family, friends and numerous professionals to develop coping strategies and tools to get me through the tough times. I’m finally learning how to take care of myself, and I’m immensely proud of my progress. However, regardless of whatever strategies I might have in place, I’m still living in a world unfit for people with mental illnesses.

Earlier this semester, my class analyzed Leap by Brian Doyle. Doyle wrote, “A couple leaped from the south tower, hand in hand.” It wasn’t about suicide, but it still caught me off guard. My professor continued reading the piece aloud: “They struck the pavement with such force that there was a pink mist in the air.” For someone who ideates these actions on a near-constant basis, hearing something so graphic first thing in the morning was too much to handle. I spent the rest of the day in limbo between reclusive dissociation and a downward spiral.

I considered writing my professor an email, but only briefly. I thought, “Why should I receive special treatment? Here comes another snowflake policing everyone’s words and actions.” Later that week, I tried telling my therapist about what had happened in class but found myself at a loss for words. The idea of telling someone that I felt triggered filled me with shame. When I did get around to saying it, he responded as he always does: with sympathy and kindness. Though he didn’t cringe like I expected him to, the shame I felt surrounding the word persisted regardless.

Mocking the language used specifically by people with mental illnesses, takes away our ability to grow, learn and cope with our disabilities. Not only that, but the media’s hateful language bleeds into the mouths of the good-natured people in our everyday lives. Unfortunately, it’s more often out of ignorance than cruelty. Being cognizant of the language you use and how it affects the people around you isn’t difficult and impacts the lives of loved ones more than you’d think. Due to the stigma surrounding mental illness, it’s more likely than not that if you casually use language that triggers someone, they’ll internalize it rather than call you out and cause a scene. Being conscious of our words and actions can be the difference between someone’s entire day going well and being ruined. If someone is affected, it’s more likely than not that they will suffer in silence.

“It’s melting season,” Lahren says on Twitter. She implies that “easily offended millennials,” also known as “Snowflakes,” are going to be taken down in some way. The issue here is the assumption that people with mental illnesses are weak. It’s true that we face many struggles and, every so often, get knocked down a few pegs. But our community is comprised of the most resilient, determined and supportive people I know.

If you’re dealing with mental health issues, you’ve come this far, and that alone is a testament to your strength. Here’s to melting season: an indicator of imminent spring.