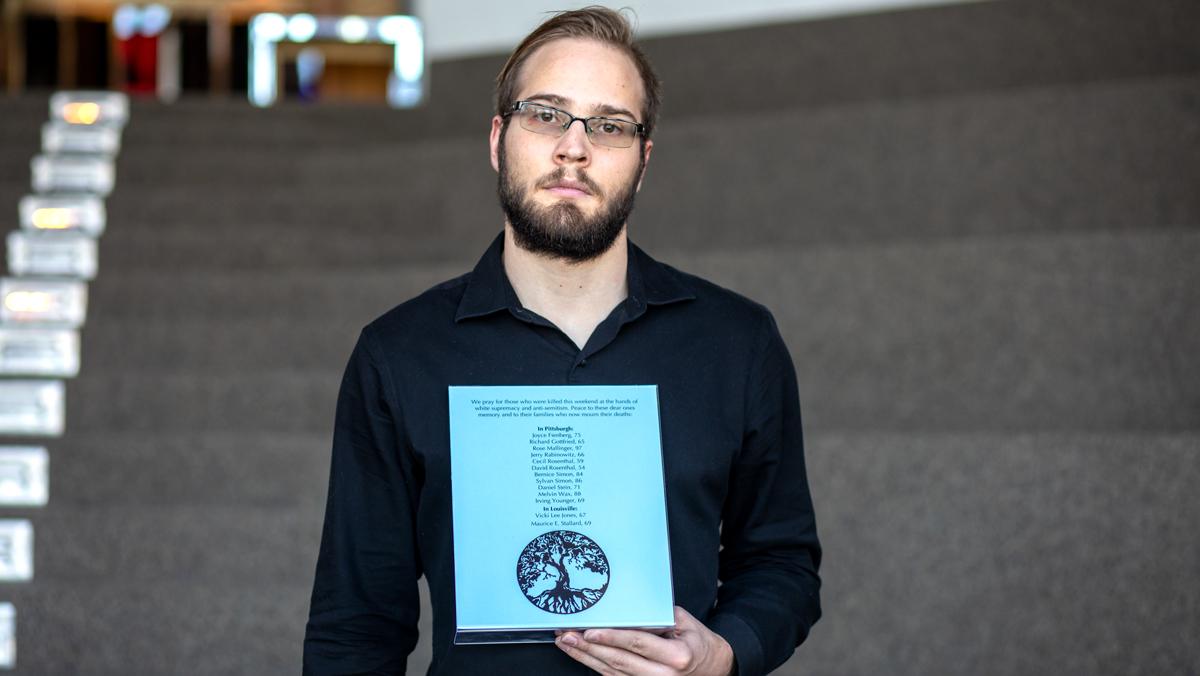 Julia Cherruault/The Ithacan
Austin Reid, Hillel springboard innovation fellow, holds the names of the victims of the recent Pittsburgh and Louisville shootings, both of which were racially driven hate crimes.
By Austin Reid
Published: October 31, 2018

Since 2011, the number of mass shootings in the United States has tripled, with one occurring roughly every 64 days. In such a climate, it is understandable why many people develop a desensitization to news of gun violence.

Indeed, I myself have forgotten about several recent mass shootings until I took the time to look them up while researching for this piece. These included the Santa Fe High School shooting on May 18, 2018, the Capital Gazette shooting on June 28, 2018, and the T&T Trucking company shooting on September 12, 2018.

Last Saturday, 11 people were murdered at the Tree of Life Synagogue in Pittsburgh, representing the most recent mass shooting in the United States and the deadliest attack on an American Jewish institution in history. The past year has seen a significant spike in anti-Jewish hate crimes overall.

In 2017, the Anti-Defamation League (ADL), a civil rights organization that monitors extremist groups currently active within the United States and compiles data on anti-Jewish incidents, reported that 1,986 anti-Semitic crimes had occurred throughout the country. This represents the largest single-year increase on record and the second highest total number reported since the ADL began tracking anti-Jewish hate crimes in 1979. In New York state, a total of 380 anti-Semitic incidents were reported in 2017, a 90 percent increase from the year before.

The growing prevalence of anti-Semitism within the United States ought to engender feelings of concern among Americans of all backgrounds because the treatment of Jews has traditionally served as a bellwether for a community’s social health. Where anti-Semitism is present, other hatreds, including homophobia and racism, are also likely to grow.

Cecil and David were brothers and Bernice and Sylvan were husband and wife. Another victim, Dr. Jerry Rabinowitz was noted for his compassion and understanding of those suffering from

HIV/AIDS at a time when the condition was only just coming into the public light and deeply stigmatized. A former patient, Michael Kerr, took to social media in the hours following the shooting to memorialize Dr. Rabinowitz as a man who, “held our hands (without rubber gloves) and always, always hugged us as we left his office.” Dr. Rabinowitz was also celebrated by Kerr as a physician who kept HIV/AIDS patients “alive the longest.”

It is believed that the gunman decided to attack the Tree of Life Synagogue due to the work performed by the Hebrew Immigrant Aid Society (HIAS), a 137-year-old Jewish nonprofit that works to support refugees of all backgrounds. In particular, HIAS assists in the resettlement of refugees within the United States. During the week before the shooting, approximately 270 synagogues across the United States participated in National Refugee Shabbat. National Refugee Shabbat was an initiative of HIAS dedicated to raising awareness of the growing difficulties faced by refugees throughout the country.

Saturday’s shooting at Tree of Life represents not just an attack on the American Jewish community but an assault on the some of the most fundamental values enshrined in American law and political tradition, including freedom of religion and freedom of speech. We must all do our part to ensure that the victims are remembered and that we do not surrender to intimidation or fear.

This Friday, November 2, all members of the Ithaca College community are invited to join Hillel for Shabbat services and dinner inside Muller Chapel at 6 p.m. During the service, the names of Saturday’s victims will be recited and Mourner’s Kaddish said. Hillel will also be incorporating elements of the HIAS National Refugee Shabbat into its service. Let us ensure that our values of welcoming the stranger and comforting the bereaved continue to shine forth despite the darkness in our world.