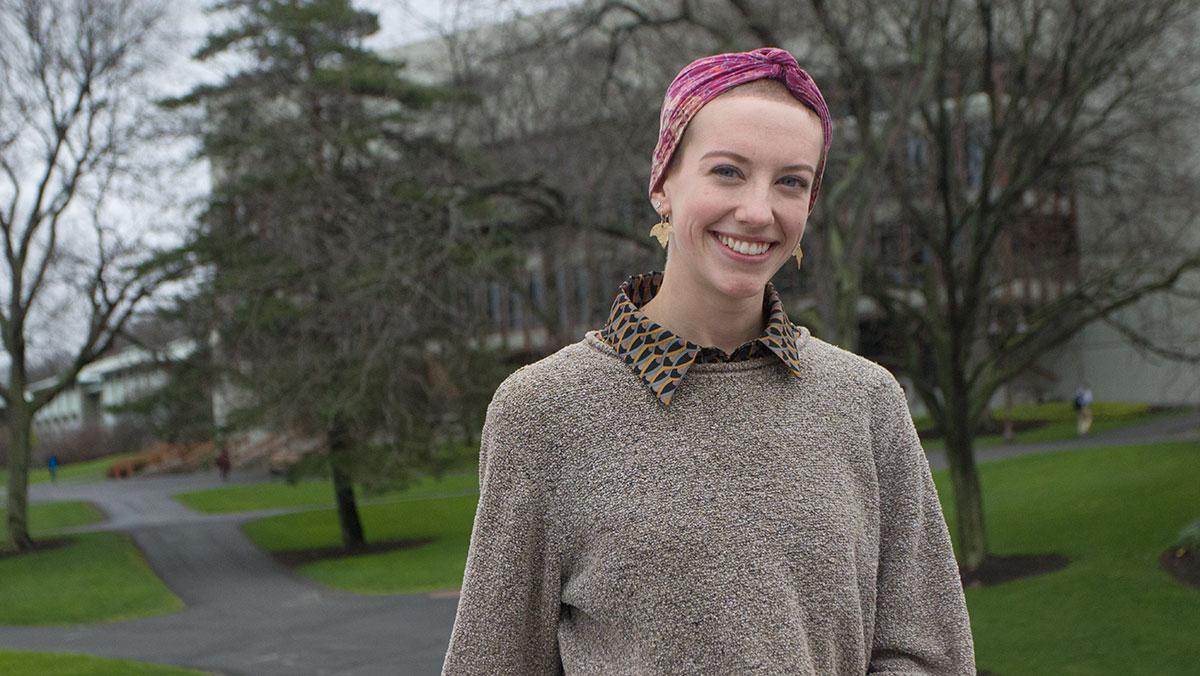 Celisa Calacal/The Ithacan
Senior Jordan Cowell presented at the Whalen Symposium on the rhetorical differences between the administration's responses to the Blue Skies and the AEPi event.
By Jordan Cowell
Published: May 3, 2016

Last fall semester, Ithaca College witnessed a campus crisis. We, as a campus community, were deeply embedded within those events. We experienced those events together, but differently. I witnessed the deep pain of many fellow students and faculty, people I deeply respect. In the midst of it all, it was impossible to remove my emotions from the equation. But in January, I began a semester-long rhetorical study of how leaders respond to crisis, giving me the opportunity to look at last semester from the perspective of rhetorical theory.

This project became a way for me to think about last semester’s events in a way that made sense for me, as someone studying culture & communication. What language — what rhetorical strategies — do people in leadership positions use when they attempt to pacify the public during periods of crisis? Why were President Rochon’s rhetorical appeals to the campus community unsuccessful?

I particularly focused on the Ithaca College administration’s public responses to two specific racist incidents: the racist remarks made at the Blue Sky Reimagining Kick-Off and the racially themed AEPi party announcement on social media. Both incidents occurred within a 24-hour period, yet the written responses from the President’s office looked vastly different. I argued that the varied level of attention by the administration to the two racist incidents led to a rhetorical failure, the consequences of which catalyzed a racial crisis, which culminated in President Rochon’s announcement of retirement.

I analyzed the administration’s public responses through the lens of the concept of kairos, a Greek term signifying the ‘opportune moment’ in which rhetorical discourse must take place if it is to be effective. Kairos is particularly important in Lloyd Bitzer’s theory of ‘the rhetorical situation.’ The rhetorical situation demands both a fitting and timely rhetorical response. The speaker must seize the kairos moment with a discourse capable of solving the problem.

I applied these concepts to last semester’s events. Immediately upon learning of the fraternity party, the Ithaca College administration published an assertive and timely response, reprimanding the discriminatory nature of the party announcement. The response to the racial comments at the Blue Sky event, however, was published four days later and included defensive argumentation and passive descriptions of the incident.

The incidents occurred back to back, yet one was responded to the same day, and one was addressed the following week.

The administration’s treatment of these racial issues led to overwhelmingly negative reactions from the campus community. The original problems that needed to be solved through rhetorical discourse were simply this: the racist comments. But the Blue Sky response was weak and left unaddressed for too long. The kairos had come and gone.
From that point forward, the makeup of the rhetorical situation changed. The moment the administration failed to resolve the original problem, the rhetorical situation proliferated and became layered with complexity. Now, the problem was not just the racist incidents. It was the administration’s poor handling of campus racism. In the minds of the students and faculty, President Rochon became the obstacle that needed to be removed.

My project shows how indifference to the kairos can lead to a rhetorical failure. Those two responses from the President’s office catalyzed a complex, racially charged crisis, which ultimately became an unwinnable battle for the President. When President Rochon failed to handle the original problem, he was defined as the problem. His entire presidency was questioned, and he lost the trust of the campus community. The situation became so highly complex that resolving the problem through rhetoric became impossible, despite his many attempts. The components of the rhetorical situation multiplied until it looked entirely different.

My hope is that this project adds some scholarly shape to the emotionally charged racial crisis in which we were all steeped. Perhaps it provides a new frame of interpretation through which we can consider the events, by shedding light on the power of language and the crucial importance of seizing these kairos moments.

Last semester, this campus community took big steps towards the creation of a more inclusive environment, but there is still a ways to go. We are approaching final exams. Summer vacation is within our reach, and in a few short weeks, roughly a quarter of the student body — many of whom hinged the student movement last semester — will graduate and leave South Hill. Life happens, but we cannot forget the work that still needs to be done by and for this campus community.

Jordan Cowell is a senior culture and communications major who presented at the James J. Whalen Academic Symposium April 14. Email her at jcowell1@ithaca.edu