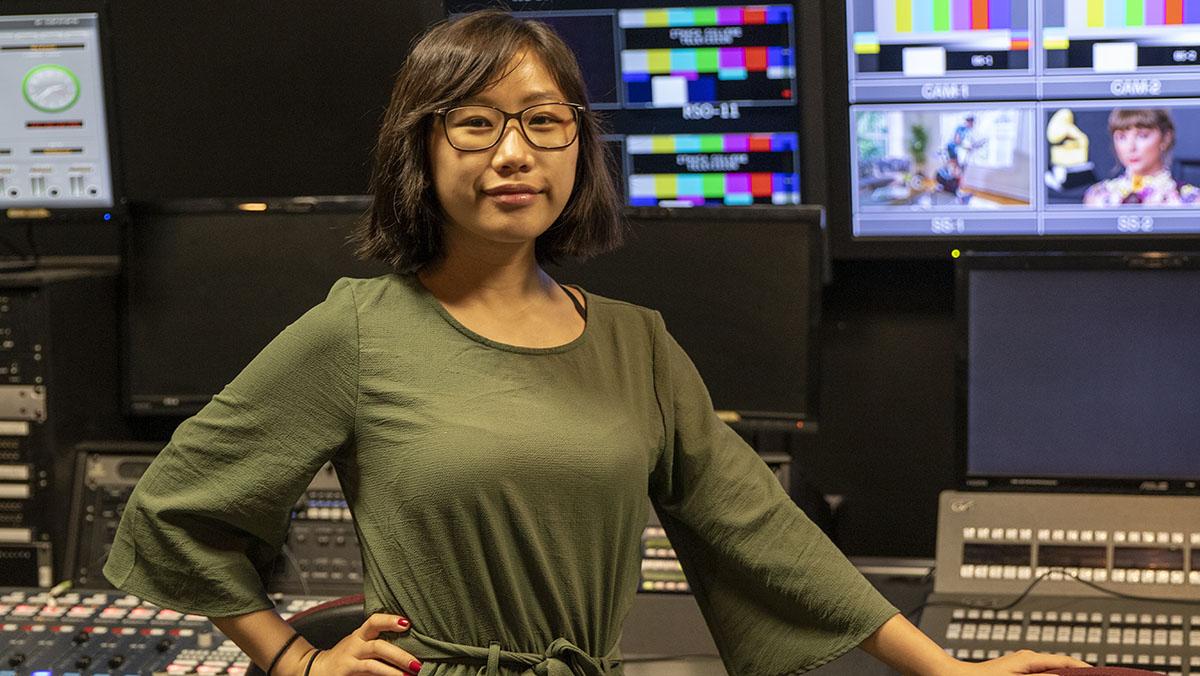 Alyssa Beebe/The Ithacan
Sophomore Jacquelyn Chin, director of on-air promotions for Ithaca College Television (ICTV), reflects on her experience and how her perspective on race representation in the television industry has shifted since she started working at ICTV.
By Jacquelyn Chin — ICTV Director of on-air promotions
Published: September 2, 2021

I wasn’t sure what I expected when I became Ithaca College Television’s (ICTV) Director of On-Air Promotions last semester; I didn’t think I’d even get the job. At the time, I had just finished my fall semester of freshman year, working as an Assistant Producer on Newswatch Tuesday and as a Guesser and Social Media Manager on Fake Out. While my high school had a film program and a TV studio, my time as the Senior Director of Studio Crew was cut short due to the COVID-19 pandemic. I figured this position would go to a much more experienced upperclassman. And yet, here I am.

When I started, I was thrown into the deep end to say the least. My main responsibility was organizing the recruitment night at the beginning of the semester. I barely knew where to start and recruitment night was just under two weeks away. I was overwhelmed and in way over my head, but with the support of the rest of the executive staff, recruitment night went smoothly and successfully. I would come to rely on them for more than work-related issues.

My high school was about 50% Asian, making me part of a prominent demographic as a Chinese-American woman. Concurrently, going to a STEM-focused high school rather than arts focused, my work as a filmmaker was often highlighted and recognized. In other words, I never thought my race would impact my future academic or work life. But then came the Atlanta spa shootings in March 2021.

For the past two years, the social landscape of the United States has been filled with racial injustice and tension. For Black Americans, the Black Lives Matter movement garnered international attention and activism during the summer of 2020. For Asian Americans, the Stop AAPI Hate movement grew as racial and COVID-19-related attacks increased towards Asians. After the Atlanta spa shootings, the ICTV executive staff sought to condemn such hateful and violent actions. As the sole Asian executive staff member at the time, I felt like everyone’s eyes trained on my Zoom box — almost asking me “What should we do?” I froze. I didn’t have any answers. How was I supposed to speak on behalf of the entire Asian community of Ithaca College and represent Asians across America when I could barely speak up for myself?

At that moment, I understood how people would view me differently because of my identity as a Chinese-American woman: that being Asian would set me apart and people wouldn’t understand how I view and experience life. Ithaca College is over 72% white and just barely 4% Asian; a stark contrast from my high school. Thankfully, Bianca Summerville, the semester’s Director of Publicity and the only other person of color on the executive staff, spoke up. Having managed social media during summer 2020, she greatly opposed posting a simple graphic to condemn the hate crimes. She argued for actionable and effective activism over a performative post with empty words. I leaned on her for guidance and reassurance to navigate those rough times.

Progress takes time, and in my short time at ICTV I’ve seen increased diversity within the executive staff, producers, crew and cast members. Outside of my duties as Director of On-Air Promotions, I also co-direct the ICTV scripted series Fathoms Below. While we didn’t cast characters for specific demographics, two of our four leads are people of color and the romantic interest is played by a non-binary actor. While the film industry isn’t quite there yet in terms of diversity, I can’t help but have hope for the future.