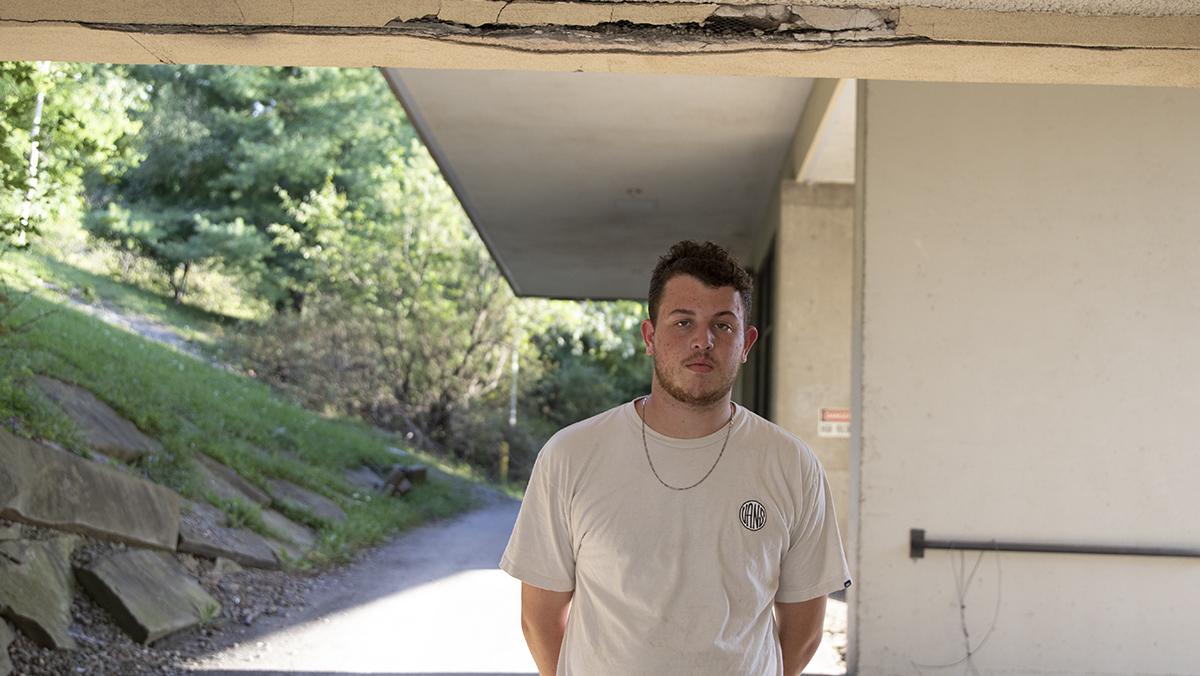 Eleanor Kay/The Ithacan
Junior Matan Berman expressed his concerns over the structural integrity of his residential hall and he urges the college to allocate funds to fix the Terraces Residence Halls that seem to be falling apart.
By Matan Berman
Published: September 2, 2021

When I found out last March that the majority of the Class of 2023 was being forced to live on campus this year, I was cautiously optimistic. But a lot of that optimism began to fade when I found out I would be living alone in Terrace 10, a place that is both far away from most of my friends in the Circle Apartments and everywhere else on campus.

A week and a half ago I decided to go on a walk. As I approached the Terrace 10 staircase I saw a crack — but this was not just any crack — it extended across the whole underside of the staircase with foundation wire popping out. The more I investigated, the more deterioration I discovered. I spotted water damage on the underside of the building, cracks in the foundation columns and pieces of the building literally falling off. After seeing this, concern and anxiety began to set in.

The condo collapse that occurred in Surfside, Florida this past June immediately came to mind. Due to neglect, poor maintenance and foundational deterioration, 98 innocent souls died in that building collapse. I personally knew two of those souls, Deborah Berezdevin and Ilan Naibryf, from my many years at summer camp in North Carolina. Deborah and Ilan were kind and generous people whose lives were cut short for reasons that were out of their control. The collapse of the Champlain Towers South condo in Surfside was not only tragic and devastating, but it also reminds us that even in one of the most modernized and industrialized countries in the world, this could happen to anyone if buildings are not properly built and maintained.

Once I saw the deterioration of my building, my mind immediately turned to the worst and the anxiety set in. For the rest of that day and the following days, I tried to avoid being in my dorm as much as I possibly could. Some nights I had panic attacks before I went to bed because I was afraid the building could collapse while I slept. I had to sleep at my girlfriend’s house for a few nights to escape the anxiety.

I contacted the Office of Public Safety about this and it recommended that I reach out to the Office of Facilities. When I emailed it, the staff tried to assure me that nothing was wrong. Without even coming to assess the damage in person, it responded, “The supervisor of this department was made aware, and they would be fixing this by next week. He assured us that it is NOT a structural issue and that no one is in danger.”

After doing a little digging, I remembered a piece that fellow student and friend, sophomore Reed Freeman, wrote for our Investigative Journalism class in 2019 about how many of the dorms, specifically the lower and upper quads, needed to be replaced or renovated soon.

Terrace 10 should be the top priority in receiving funds this year, because it is visibly deteriorating on both the inside and out. Ithaca College must act as soon as possible or the consequences could be dire.

Editor’s Note: The Office of Facilities has not responded to a request for comment at the time of publication.