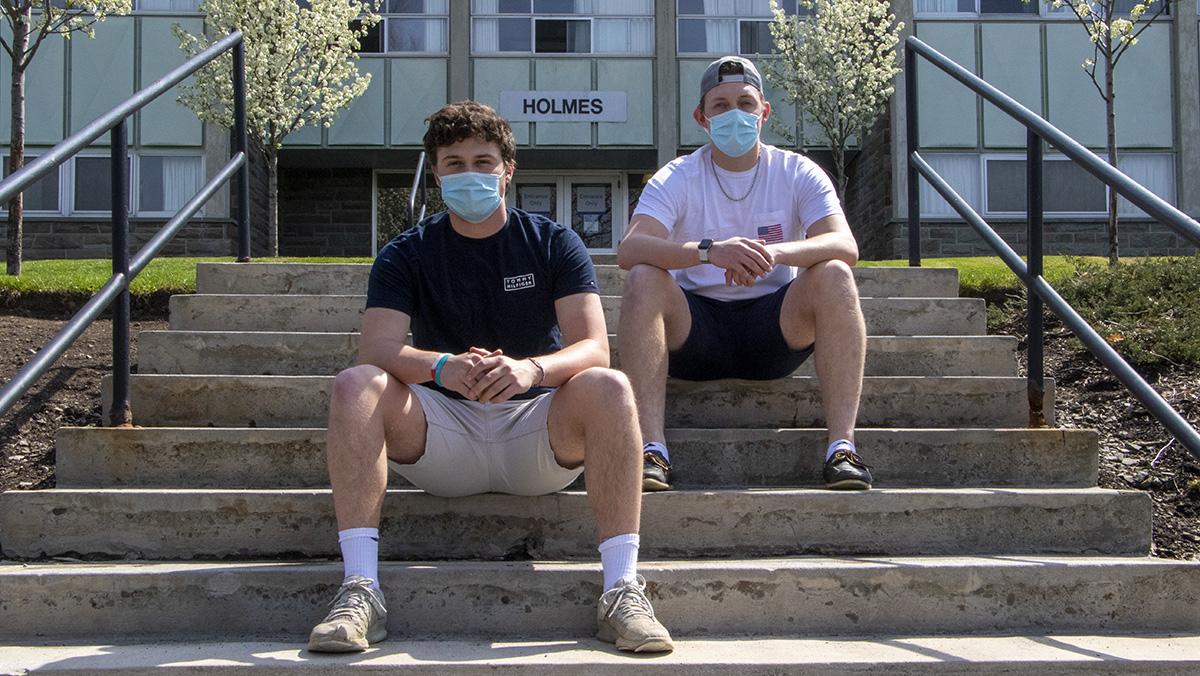 Abbey London/The Ithacan
From left, sophomores Noel Foster and Andrew DeGeorge are currently roommates and had hoped to live in an on- or off-campus apartment for the 2021-22 academic year.
By Arleigh Rodgers — Senior Writer
Published: April 29, 2021

Following Ithaca College’s decision to eliminate the 2021–22 off-campus housing approval process, many rising juniors are frustrated by the housing process.

Rising juniors are finding that housing spaces in the on-campus Garden Apartments or Circle Apartments — an alternative to off-campus housing for many upperclassmen because of their kitchens and private bathrooms — have been filled. On April 23, an email from the Office of Residential Life was sent to students in housing groups larger than three people notifying them that the remaining housing spaces available on campus are for no more than two students. Students were given until April 26 to adjust the size of their housing groups.

Laura Davis, assistant director for housing services and communication, said that there is enough housing for students on campus but that interest in the apartments usually outweighs the apartment spaces available. The alternative to on-campus apartment housing is a dorm in a residence hall.

“As is the case every year, the on–campus apartments specifically are filled prior to all students who request them being housed in them,” Davis said via email. “Once larger apartments were filled, the groups who were unable to be housed in an apartment were provided an opportunity to adjust their groups so that they could determine how they wanted to proceed (such as having housing set up as an individual or with a requested roommate).”

Two petitions on Change.org are circulating among students at the college. “Petition for Ithaca College Off–Campus Housing for Juniors” has over 1,000 signatures, and “Juniors should not be forced to live in dorms” has over 100. This semester, there are 1,094 students in the college’s sophomore class. In the Garden and Circle Apartments, there are 1,274 available spaces.

Both petitions request a change to the housing process by letting juniors choose where they want to live and state that the college’s financial instability should not be their burden.

The college’s budget model relies heavily on student fees, including tuition, room and board payments. However, with the decreases in enrollment, concerns have been raised about the sustainability of this model. The college is currently in a $24.5 million budget deficit.

“Ithaca College simply doesn’t put their students first,” states one petition. “They are more worried about us paying more money than the health of their students.”

The college requires freshmen, sophomores and juniors to live on campus but allows a limited number of non-seniors to live off campus if there is not enough housing available. In November 2020, the college announced that there would be enough anticipated housing for all freshmen, sophomores and juniors in the coming academic year because of decreased enrollment projections and eliminated the off-campus housing application for the 2021–22 academic year. Like last year, students were assigned housing rather than selecting it themselves.

In 2019, approximately 470 juniors applied to live off campus, 238 of whom were granted permission. That year there was a higher number of applicants, and fewer rising juniors were approved for off-campus housing.

Sophomores at the college spoke out against the policy and expressed their frustration with the application system because some submissions were improperly recorded or not collected because of technical difficulties. This led to random selection housing instead of the usual first come, first served. Earlier that year, sophomores also had trouble selecting a residence hall typical for their class year because either the slots were full or the college’s housing portal shut down.

Sophomore Jenni Pitts said she has struggled to find an apartment on campus after applying with three other students.

“I think it will be really different going from everyone being so separated to being back in a dorm again,” she said. “Just the social aspect of it, it’s going to be completely opposite of what we were used to for the past year.”

Pitts said she has spoken to the Office of Residential Life about why the on-campus apartments filled up and pushed rising juniors into dorms. She said that residential life informed her that many rising seniors elected to live in on-campus apartments and that they have priority over other students for the apartments, Pitts said. As of Spring 2021, there are 1,271 juniors.

“A lot of seniors live on campus, and that kind of directed my question towards, ‘Why don’t they apply certain juniors to live off campus for the number of seniors that are taking up apartment opportunities?’” she said. “I kind of hoped that [residential life] would look into that a bit. If they’re going to let seniors live on campus, at least allow juniors to take those off-campus spots.”

One student who signed “Petition for Ithaca College Off–Campus Housing for Juniors” is sophomore Amulya Ankem, who applied for a four-person Garden Apartment. The group will find out April 30 if they get the apartment, though she said she does not have much hope they will. Ankem said that when going into the application process, she assumed there would be issues because she had problems with housing selection last year.

However, Ankem said she hopes to avoid living in a dorm because when she was a freshman, she lost a lot of weight from the food in the dining halls on a meal plan that she said could not sustain her. As a result, she often cooked Indian food — a source of comfort that reminded her of family and home  — in her dorm’s kitchen, which she said was usually dirty from other students’ meals.

She said residents in her dorm complained about the smell of her food. These instances made her uncomfortable and heightened her sense of insecurity as a person of color at a predominantly white institution, she said.

“Now I’m just kind of worried I’m just kind of going to be starving a lot,” she said. “I think I’d feel a lot more comfortable just having a space that is also mainly just for me and the other people that I’ll be living with. … Then there’s also a safe space outside of the school that we can have.”

Sophomore Noel Foster created the petition “Juniors should not be forced to live in dorms” on April 21. In Fall 2020, Foster signed a half-year lease and lived in Ithaca because classes were online. Back on campus this spring, Foster lives in Terraces, a stark difference to the independence and privacy of an apartment, he said.

“You can get a privacy [in an apartment] that you don’t have in a dorm,” he said. “You don’t have to have a person that you’re sleeping right next to. … The dining halls, obviously, aren’t the best here, so just being able to cook for yourself [and] eat what you want to eat. And then I honestly think I’m a much better student when living in an apartment.”

Junior Reilly Kleinhen said he feels as if he is losing a key aspect of his college experience, including the chance for increased freedom he thinks off-campus housing would grant him.

Kleinhen took a leave of absence in Fall 2020, but if he had not taken the leave, he would have been able to live off campus with senior status in Fall 2021. He said that when he explained this to residential life, it said he could only apply to live off campus in Spring 2022, as he plans to graduate in Fall 2022 — a solution that does not appeal or seem fair to him.

“It was their decision to go and not have … in–person classes, and when you have that problem, … of course there’s going to be people that are not going to be attending your university,” he said. “That’s a very rash and stupid decision that is going to affect you on a financial level, very much like what we’re seeing right now.”