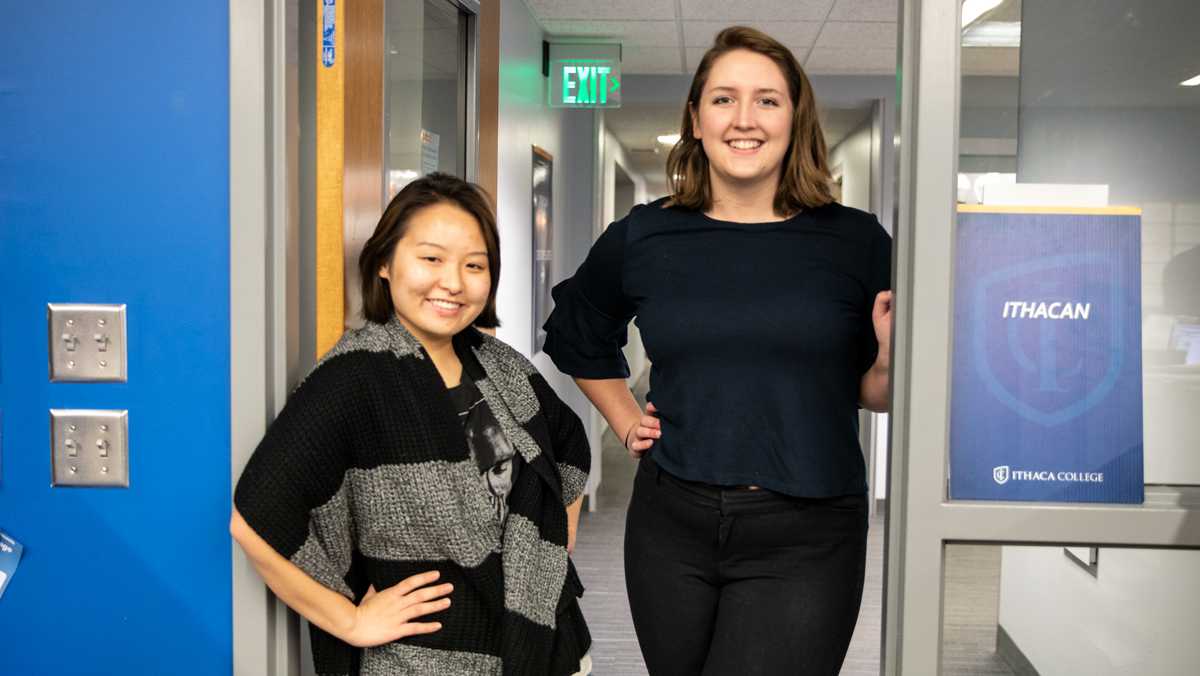 Julia Cherruault/The Ithacan
From left, seniors Kat Walsh and Grace Elletson, community outreach manager and editor in chief of The Ithacan, write about the paper's most recent efforts to represent the community in its reporting.
By Grace Elletson, Kat Walsh — Editor in Chief, Community Outreach Manager
Published: December 13, 2018

At the beginning of this semester, The Ithacan announced that it would be taking a hard look at its coverage of the college community, particularly in the way it covers marginalized groups.

Since then, a new position has been created, many important conversations have been held and plenty of progress has been made — and we’re just getting started. We wanted to update our campus community on what we’ve achieved so far and what we’re planning for next semester. We’d also like to present the initial findings of The Ithacan’s first audit of its sourcing, which was tasked to analyze the proportion of male to female to gender nonconforming sources in our coverage. First, we want to acknowledge that gender is a social construct that encompasses a wide variety of people both binary and non binary, and because it is not always clear in our articles how people identify on the gender spectrum, we recorded our sources who use they/them pronouns as a gender nonconforming grouping.

Here’s how we did it: We took a look at every story that appeared on the front pages of each section in The Ithacan that relied on sourcing — News, Sports and Life & Culture. We recorded the genders of all of the sources that appeared in those articles and came up with an average for each section.

Here’s what we learned: Over the past three years, we’ve done a pretty good job keeping an even representation of men to women in some of our most important stories in The Ithacan. This is really good news given that in mainstream media, women are often underrepresented — during NPR’s fiscal year 2016, 40 percent of its sources across five of its blogs were women; the Global Media Monitoring Project found in 2010 that only 24 percent of the people heard, read about or seen in the news were women; and The Christian Science Monitor found that in its January 2018 reporting, for every two women sourced, three men were featured.

Despite having taken on the audit, we’ve also been pursuing other avenues to strengthen our coverage and connect with our community. At the beginning of the semester, the editorial board received a training on racial sensitivity in our reporting processes by Jacque Washington, social worker in the Center for Counseling, Health and Wellness. And just recently the editorial board, along with staff writers, met with Luca Maurer, director of LGBT Education, Outreach and Services, to talk about how to best cover the LGBTQ community. The Ithacan also held its first community outreach discussion Oct. 29, where we met with students to hear their thoughts and concerns about our coverage. Because of low attendance, we learned that inviting community members to a neutral location may not be the best way to spark a dialogue, and so we plan to reach out to individual groups next semester to make more personal connections and learn more about how The Ithacan’s coverage can benefit our community.

We want to reiterate again that this community newspaper should be benefiting and representing all, not just a few. We will always continue to move toward this goal, and we are excited to keep up this momentum into the spring semester.