Commentary: Trans and queer stories are vital to sex-ed 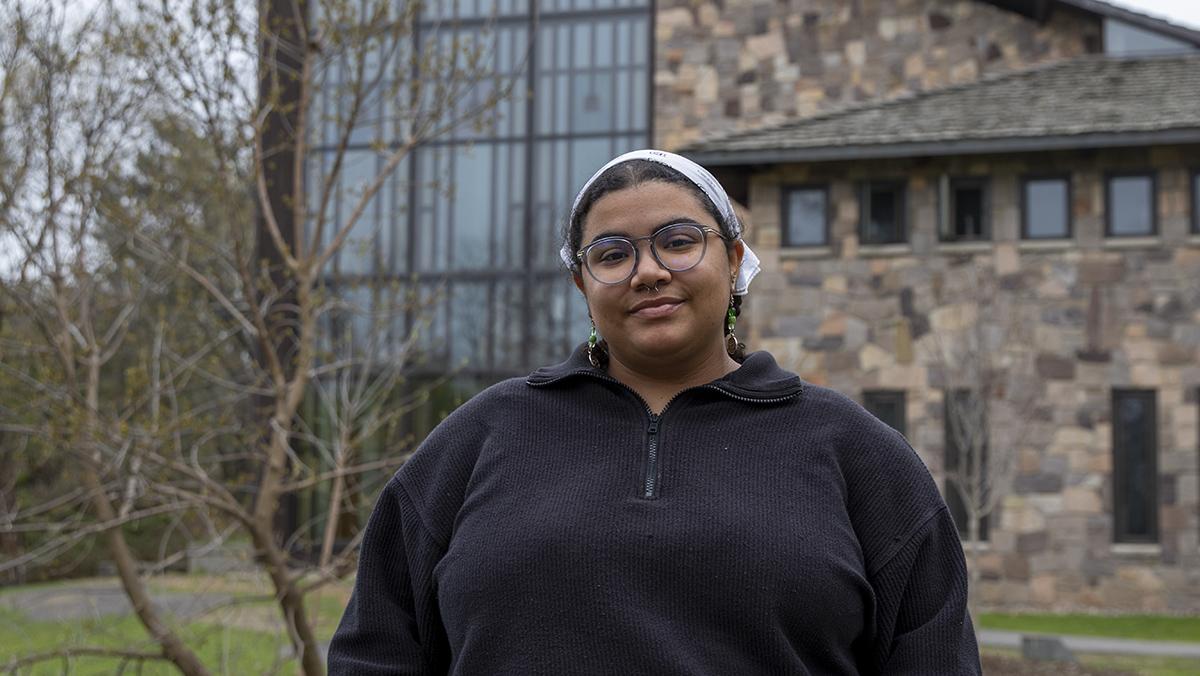 Nolan Saunders/The Ithacan
Senior Annnie Pen-Castellanos has been conducting an independent study on trans-identifying people and their experiences with sexual education — they share their findings.
By Annie Pena-Castellanos
Published: May 11, 2022

Growing up, I always felt different from my peers. I questioned the way my body looked, the parts associated with being a “girl” and the reproductive functions of being a “girl.” The restrictiveness of that title — having to shave, wear my hair long and be submissive throughout society — made me feel so uncomfortable. Those days that I did have to wear a dress or act docile were the days I felt the most masculine; wearing a dress felt awkward on me. So when it came to having sex education in school, I felt the most awkward — not because they were talking about sex with the opposite gender, but because I felt like there was something missing, I just wasn’t aware what it was.

During my teen years, I wondered if anyone else felt the same thing I felt. I wondered if other people were questioning their own gender and sexual identity. Was I crazy?

Throughout the 2021–22 academic year — my senior year — I devoted myself to looking into sex education and how it’s taught throughout social institutions like school, religion and the home. I found a trend wherein these social institutions did teach sex education, but in a very heteronormative way. I wanted to know how queer and trans people experienced sex education while growing up and questioning their own identities. I interviewed eight nonbinary/trans people who were able to reflect and talk about their experiences within these institutions while learning such a heteronormative curriculum. By the end of these interviews, they had all answered my question: no. I wasn’t crazy. They also taught me all the other issues that come up when other identities aren’t being represented in an accurate way.

Many trans and queer people are very much left in the dust when it comes to understanding or knowing what resources are available to them. During sex education courses, it is expected that people will be having sexual relationships with people of the opposite gender — but that isn’t the case for everyone. Many teens and young adults have been coming out and starting to identify as transgender or queer in the most recent years. So when all they learn about is penis and vaginal penetrative sex in school or are exposed to depictions of heterosexual relationships in school or media, it might make people feel like they don’t have that space to express who they really are. They feel like they have to identify as cisgender or heterosexual because that is the only information that is easily accessible to them; they feel like it is the “right” way to identify.

This can create not only individual issues, but it can also serve as a public health issue amongst the LGBTQ+ youth for many reasons: they won’t know what resources they can use within same-sex relationships to ensure that they protect themselves or their partner(s), or even where they can access these resources safely without feeling judged for their identity. This can also make it hard for people to understand consent and the importance of giving and receiving consent before engaging in sexual relationships with their partner(s).

It can also unknowingly promote homophobia and transphobia. Since students who do identify within the binary have very little exposure, they will tend to have a narrow way of viewing their peers who don’t, which ends up harming queer teens, since they have the potential to internalize that homophobia or transphobia. This internalization can appear as making decisions that seem unsafe or harmful to themselves, like going on dating websites at a very young age or not understanding when a relationship is inappropriate or abusive.

This study wasn’t only conducted to help me get my questions answered, but also to bring the inequalities to light, like not having the information to make informed decisions on their bodies and their relationships. Although there have been active efforts by administration and teachers, there has also been a huge pushback on trans and queer conversations. Like the “Don’t Say Gay” bill being passed in Florida, which is actively silencing those open and inclusive conversations in the classrooms. This topic has been researched many times in hopes of seeing the perspectives of queer and trans folks in order to make advancements toward a more inclusive society. But in order to see the change, people have to keep fighting the battle to normalize these queer experiences.