Editorial: All comments are welcome 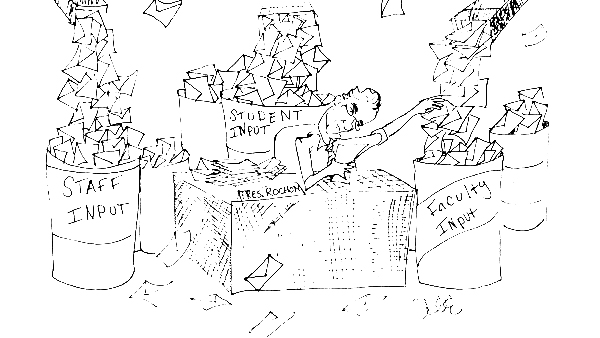 In the past year, the administration has come under fire from students, faculty and staff demanding an end to top-down governance and the opportunity to have their voices heard.

Ithaca College has been in the midst of major changes that include an overhaul of the academic curricula and modifications to the budget. The campus community has expressed its opposition to many of these changes through open letters, online comments and town hall meetings. While this opposition gave voice to separate specific concerns, the overall message seemed to be the same — everyone deserves a say in the college’s future.

Recently, the college hired Huron Consulting Group to help the college become more efficient. When Huron unveiled its recommendations, the administration actively sought input from the community before making policy changes. The college created an online forum for input on the recommendations and scheduled open discussions on campus to ensure students were able to provide feedback. Members of the campus community were not only allowed to voice their opinions on potential changes to the college, they were strongly urged to join the conversation. All students received a letter from President Tom Rochon urging them to weigh in on the potential changes that could stem from the Huron review, faculty have received regular emails with more in depth analysis of issues facing the college and Rochon attended meetings with students to hear their concerns. Rochon’s commitment to hearing all opinions is a mark of strong leadership and a hopeful sign of a more open and balanced future for governance at Ithaca College.

Moving forward, the administration must make a clear effort to include the campus community’s feedback in deciding which Huron recommendations to act on. Many of these recommendations could directly impact life on campus, and student, staff and faculty opinions are critical to ensuring these changes do not hinder the college’s ability to provide students with a quality education and college experience.