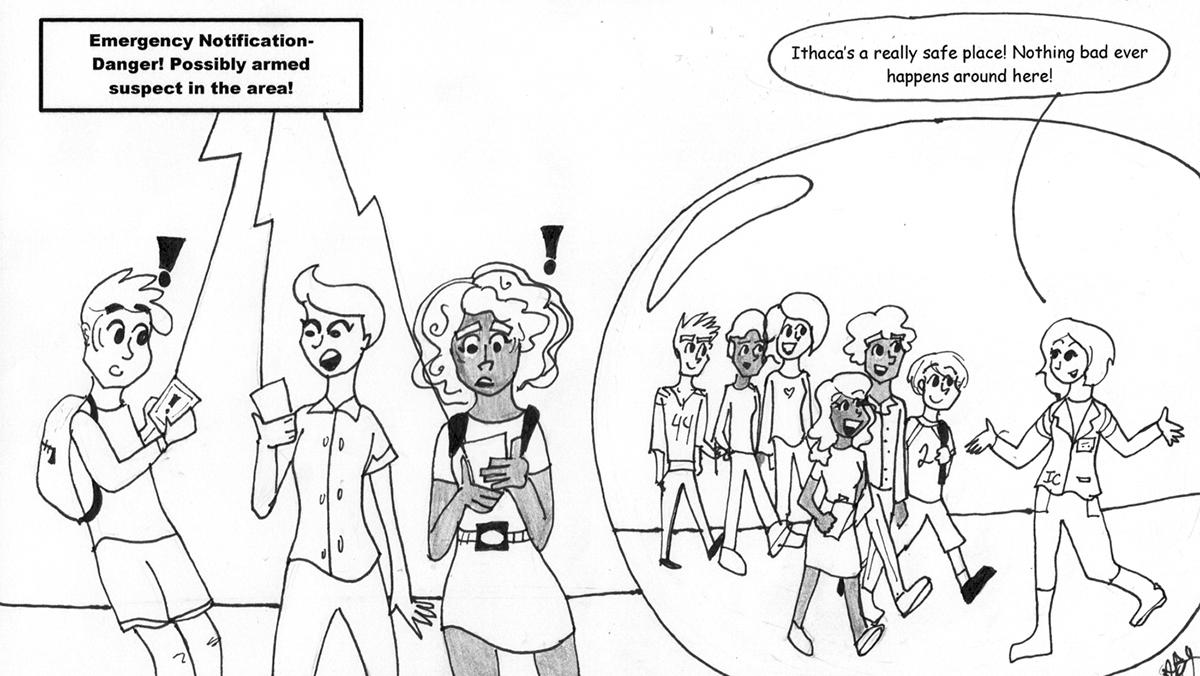 Ithaca College has experienced a number of violent incidents in the past academic year — more than the campus community has traditionally been accustomed to. In September, Ithaca College student Anthony Nazaire was fatally stabbed after a party at Cornell University. Two weeks ago, shots rang out in the early morning April 9 on The Commons when a man opened fire after an altercation. And this week, a search began near campus for a man involved in criminal trespassing and who might have been armed.

What feels like an upsurge in crime is further corroborated by crime statistics for Tompkins County, which show that crime has indeed increased in the past five years.

These instances of violence may seem abnormal or unfitting for a place like Ithaca, as the city is frequently billed as a safe place to live. But the reality is not as pristine as the perception. The unfortunate truth is that violence can and will exist anywhere, regardless of location. And within a culture that glorifies guns and affords easy access to these weapons, gun violence can easily become a common occurrence. Violence can break out at any time at any place, regardless of who will be impacted by the actions or where it is taking place.

Despite what statistics show, many students are still lulled into a false sense of security at the college. Even a week after the shooting on The Commons, many students said they still felt safe. This is not to say that the desire for safety should be belittled — every person deserves to feel secure and safe. However, by virtue of living in Ithaca, a metropolitan area and not the quaint small town it is characterized as, students at the college are still vulnerable to violent crime.

When news broke of a possible armed suspect near campus grounds, the mass notices from the college gave no precautionary advice as to how students should handle the situation, such as whether they should stay inside or refrain from traveling to a certain area of campus. Furthermore, alerts about the situation did not even reach every student until 3 p.m., even though news of the suspect had been known hours beforehand.

While the college may have been trying not to instigate widespread panic, students deserve full and immediate disclosure for any violent circumstances that may endanger those in the college community. Not giving students any guidelines as to how to handle potentially dangerous situations perpetuates the idea that nothing bad ever happens in Ithaca.

Acknowledging Ithaca’s increase in crime can also lead to more productive conversations about crime prevention and combating gun violence. What students must realize is that the college does not exist in a bubble that can avoid violence, and perpetuating and continuing to believe this notion become its own danger.