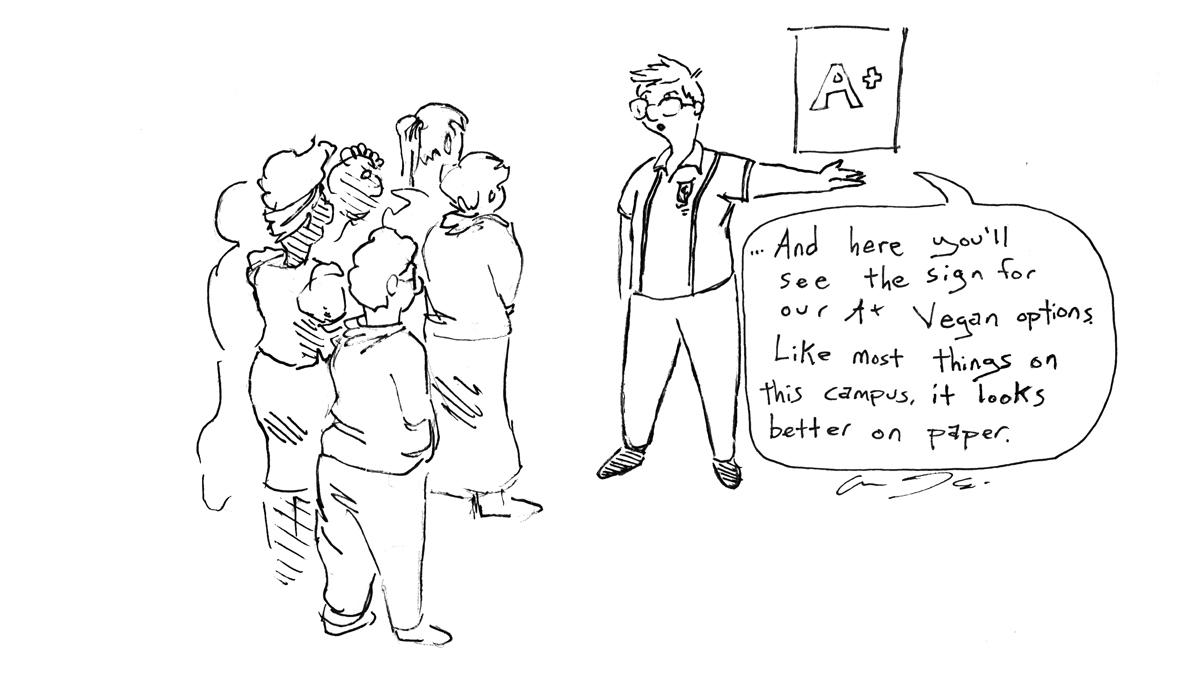 For the past several years, Ithaca College has received an A-plus rating for the vegan options it offers in its dining halls. The rating is based on a self-reported survey administered by peta2, an organization that requires colleges to have basic vegan meal options in at least one dining hall on campus. This rating has been a selling point to vegan students in the past; however, several students voiced that they felt disappointed with the options once they arrived at  the college.

If someone were to walk into any dining hall on campus or visit the college’s website, they would be able to find  an advertisement promoting the A-plus rating. Despite this rating, a glaring issue with the vegan options available in the dining halls remains: Vegan students’ dietary needs are not being fulfilled.

Instead of plentiful, diverse options from each food group, it has been reported that the vegan options at the college’s dining halls have largely remained static and are often limited to a handful of foods that often lack necessary nutritional value. Several students have commented that the dining halls only offer one type of protein, or none at all, and that the other food groups available still often leave much to be desired. Ultimately, students have claimed that a vegan diet under the college’s Dining Services is lackluster and unfulfilling and sometimes has led to malnutrition and weight loss.

Considering this widespread dissatisfaction, it is problematic that the college continues to advertise itself as an institution that is open to all diets. While the A-plus rating exists, it only stands as a baseline for minimal vegan requirements, and the criteria to earn a high rating are rudimentary at best. It mandates that Dining Services provides only the most basic level of options for vegan students.

While non-vegans are provided numerous entrees and overall options — despite, admittedly, being of questionable quality at times, as past student complaints will reveal — vegans are met with the same static, often non-nutritious food time and time again.

Vegan students also deserve nutritious meals. There are several dining halls and places to obtain food on campus in order to feed the college’s entire student population; however, only a small fraction of those services are accessible to vegan students on restricted diets. Despite only being able to eat a small fraction of the food available — which is often also limited to specific hours in the dining halls — vegan students still have to pay the same amount for a meal plan as any other student, funding a dining service that does not truly serve them. Additionally, on top of meal plan fees, vegan students often need to pay for more food out-of-pocket due to not being satisfied with what the dining halls provide.

These grievances all beg one question: What can the college do to improve the experiences of its vegan students?

Ithaca College has been boosting its vegetarian options by devoting Monday to an international Meatless Monday campaign.