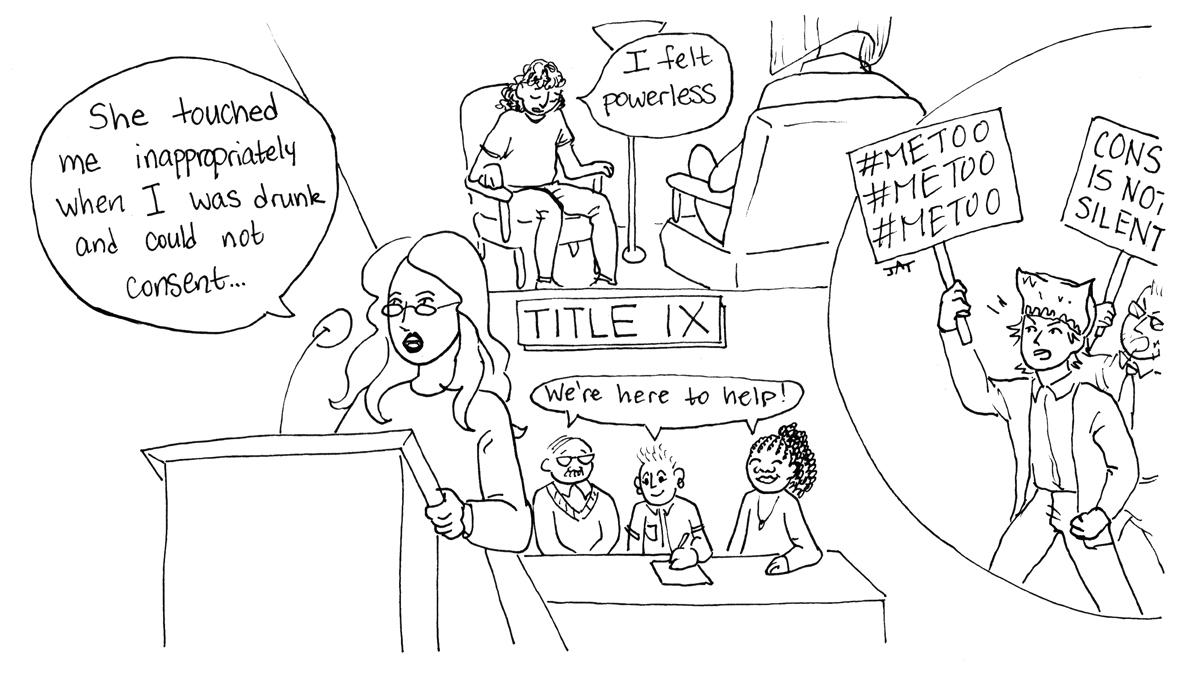 Over the last few years, Ithaca College has seen a consistent increase in the number of reported rapes on campus. In 2016, 16 on-campus rapes were reported. This number increased to 26 in 2018, according to the Annual Security and Fire Safety Report released Oct. 1. In the last three years, the college has also seen an increase in reports of on-campus domestic violence and fondling.

As reports of sexual assault, rape and domestic violence increase at the college, it is vital that all students acknowledge the necessity of consent, remain educated on their rights and continually provide support to survivors of sexual assault and violence.

In recent years, the #MeToo and #TimesUp movements have helped positively alter the dialogue surrounding sexual assault and abuse, that has historically been dominated by shame and the demonization of survivors. New language around sexual violence has made its way into the mainstream, including conversations on college campuses. However, despite the increase in comprehensive dialogue on college campuses, the process of dealing with an incident of sexual assault largely remains daunting and ambiguous.

The Ithaca College Students’ Bill of Rights highlights students’ basic rights in the aftermath of sexual violence. This includes the right to make a report to law enforcement, the right to elect to participate in a judicial or conduct process and the right to receive courteous, fair and respectful health care and counseling services from the college. The bill also indicates that students can choose an adviser to accompany and help them throughout any judicial and conduct processes. This right applies to both reporters of sexual assault and the accused. The Students’ Bill of Rights can be a beneficial resource for students seeking judicial action in the aftermath of an assault, but students must also look at sexual assault from a preventative standpoint. Conversations about consent can be difficult and confusing, especially considering the role of alcohol in today’s college hookup culture. The existence of these seeming “gray areas” around consent only further emphasizes how important it is that college students educate themselves on ways to maintain healthy sexual relationships.

There are a number of on-campus resources dedicated to helping students recognize and understand issues of sex and consent. Just this year, a group of students created IC Strike, a student organization that provides a space where students can actively work against sexual assault and provide survivors with a support system.The college is also home to the Sexual Harassment and Assault Response and Education (SHARE) program. Created to educate college community members on issues of sexual violence through awareness and education, SHARE provides confidential resources, directs students to places where they can report incidents of sexual violence and answers frequently asked questions about sexual violence on campus.

Educational resources even extend beyond the campus itself. The Advocacy Center of Tompkins County, a nonprofit located in downtown Ithaca, aims to increase safety and reduce trauma for those who have been impacted by sexual assault, abuse or domestic violence. The organization’s free, confidential services are an open resource to those throughout the county, including students at the college.

It is easier than ever for college students to educate themselves, engage in conversations about sex and consent, and seek resources to prevent sexual assault. As new language around sexual violence continues empowering survivors, it is important that survivors and allies alike take note of the available resources and recognize that stigmas should not prevent them from seeking help.