Student movement toward divestment of fossil fuels must remain realistic about costs and complexity of endowment. 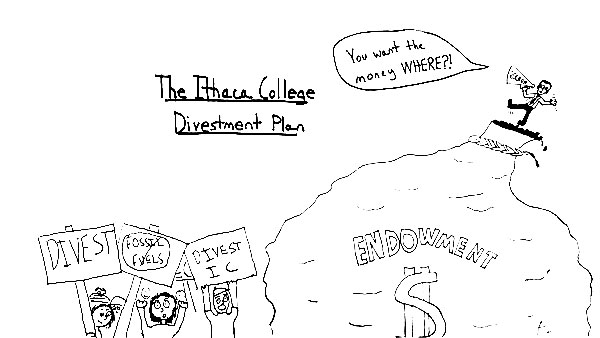 On Dec. 9, the Student Government Association, backed by Divest IC, passed a bill recommending research into divestment from fossil fuel companies. Results from the research will help decide whether the SGA will recommend divestment. However, the fiscal duties of the college and the complexity of its endowment make divestment unlikely in the short term.

The college’s endowment is a collection of fiscal gifts. A typical university in the United States reinvests around 95 percent of the funds. Each contribution may have a stipulation that determines how these funds can be invested. According to the College Sustainability Report Card, Ithaca College neither makes commingled funds public nor invests in renewable energy funds with its $202.9 million endowment

Divestment requires diverting fossil fuel investments to clean or non-energy industries while also adhering to the restrictions of endowment donations. This has been a long process for smaller schools. Unity College in Maine, with fewer than 600 students and a $15 million endowment, began reducing its exposure to these industries in 2008. By 2012, Unity decreased its investment in fossil fuels from 10 percent to 3 percent. San Francisco State University Foundation, with an endowment of $51.2 million and has currently only divested from coal and tar sands companies.

Divest IC aims to form a sustainable investment committee by the end of the semester. This requires a process that has taken Unity College almost five years to complete. Given the size of the college’s endowment and its commitment to the privacy of its contributors, students must remain realistic about the length of the process, but also positive that their efforts are a stepping stone to real changes later.