If Ithaca College institutionalized a drug policy in addition to what the NCAA requires, should only student athletes receive attention? 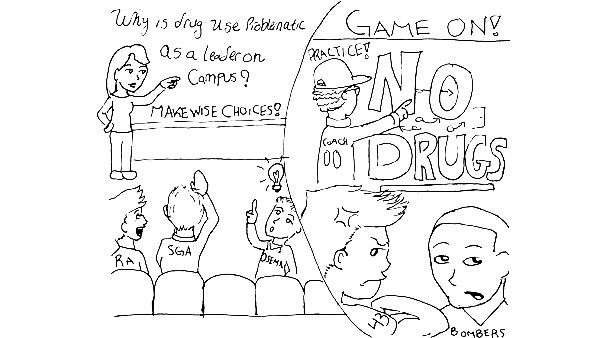 Like 79 percent of Division III schools, Ithaca College does not have a college-specific drug-testing policy for its student-athletes.

Under NCAA policy for Division I and Division II schools, students are required to be tested for drugs year-round. Student-athletes in Division III schools are only tested at championship events. At the college, the only drug education student-athletes receive is a meeting with Mike Lindberg, associate athletic director, who informs them of the repercussions if their tests come back positive for any substances.

If the college were to institutionalize drug testing for its athletes, it would spend thousands of dollars on testing in addition to what the NCAA requires.

When people think of drug tests, they often picture performance-enhancing drugs. But the tests also check for marijuana and chemicals found in dietary supplements — drugs used by more than athletes.

The performance of athletes is as important as that of art, science or business students who represent the institution. The Division III mission statement even says student-athletes “are integrated on campus and treated like all other members of the general student body.” If the college were to adopt a more rigorous drug-testing policy, perhaps students in prominent roles such as Resident Assistants and members of the Student Government Association should be tested as well.

While adopting an individualized policy for student-athletes could dissuade drug usage, a more cost-effective and inclusive alternative would be developing an education program. This program should not just be a meeting with the athletic director, it should be an educational experience about the harmful effects of drugs for those performing and occupying leadership roles on campus.