Editorial: Luvelle Brown must step down from positions of power 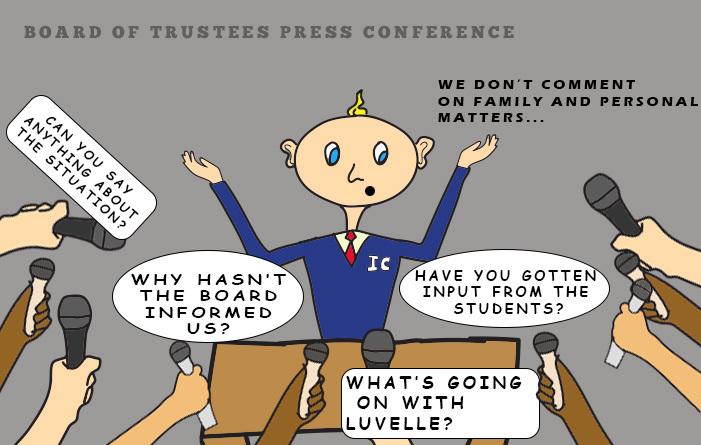 Illustration by Malik Clement
By The Ithacan
Published: April 7, 2022

All eyes should be pointed at the Ithaca College Board of Trustees’ complacency with news surrounding Luvelle Brown, board of trustees member and superintendent of the Ithaca City School District (ICSD). Luvelle Brown has been petitioned by his ex-wife Anjanette Brown with the help of Peyi Soyinka-Airewele, professor in the Department of Politics at the college, with complaints including inadequate educational resources for their son, abuse of power as superintendent to have more time with the children outside of the custodial agreement, limiting Anjanette Brown’s involvement in her children’s education, unethical hiring practices, and interference with a Child Protective Services (CPS) investigation following Luvelle Brown’s alleged physical assault of their son.

Brown is facing pressure from the Ithaca community to step down from these positions he currently holds after allegations of abusing his son and leveraging his power as superintendent over others to cover up heinous acts. And frankly, more pressure is needed.

The board of trustees holds immense power at the college as it is responsible for governing policies that affect the livelihoods of 5,400 students and 646 faculty members. As a trustee, Luvelle Brown is in a position to wield great power over Ithaca College plus he is responsible for the education and betterment of about 5,000 students in ICSD. Yet a petition created on change.org by IC Alumni Against Austerity in February demanding Luvelle Brown to step down has received only 268 signatures as of April 6. This number of signatures is nowhere close to even half of the Ithaca College community. And while the message of one organization may be hard for the entirety of the campus to receive, it is our job not to become desensitized to the systems of power enabling abuse that we are existing within.

However, for the board of trustees to harp on closed-off family affairs and write this situation off as private, when Anjanette Brown is publicly spearheading Luvelle Brown’s removal, is baseless and embarrassing for the board. Hiding behind the facade of personal matters and dodging questions of action is the very problem as no accountability is being taken; the failure to take Luvelle Brown’s abuses seriously undermines any efforts on campus to hold abusers accountable. This is personal to the entirety of the Ithaca College community as this extends far beyond family matters. We must remember what is at stake: children and their lives. This is alleged child abuse and deep-seated corruption — we must care. The board of trustees is right by implying the impersonal way of conducting business is easier and better, but it is only easier because it is not the full truth. The full truth to the proceedings of Luvelle Brown is shameful — the unraveling details to this story are not better, they’re horrific.

Keeping corrupted leaders in positions of power is injurious and puts the whole campus community at risk by normalizing abuse. This is dangerous not only to the general community of Ithaca but even more broadly as this perpetuates the message that in certain circumstances, abuse is acceptable and inconsequential. Ithaca College has a history of enabling abusers, and the time to do better is far past due. We must make this personal and think of the lives of Anjanette Brown and her children. The injury of policy — the hours of paperwork to no avail, reliving the trauma, the convoluted interpersonal stories the public doesn’t often understand, the twisting of words, the lack of the personal within a sterile courtroom, the harm to the children — is often worse than the initial injury itself. There is only one ethical way for Ithaca College to move forward and that is taking a stand against Luvelle Brown.

Luvelle Brown has been superintendent of ICSD since 2011 and has been a member of the college’s board of trustees since 2018. His term on the board ends May 31, but he may be reelected for up to three additional three-year terms as per the board of trustees’ bylaws. We as students and the Ithaca community cannot allow this to happen. Our apathy is hurting us now and will continue to hurt others, for remaining complacent on this issue is to uphold abuses of power and remain neutral on allegations of child abuse. Our eyes need to stare the Ithaca College Board of Trustees directly in the face demanding a reality check. Educating ourselves of this story is not just important but necessary.