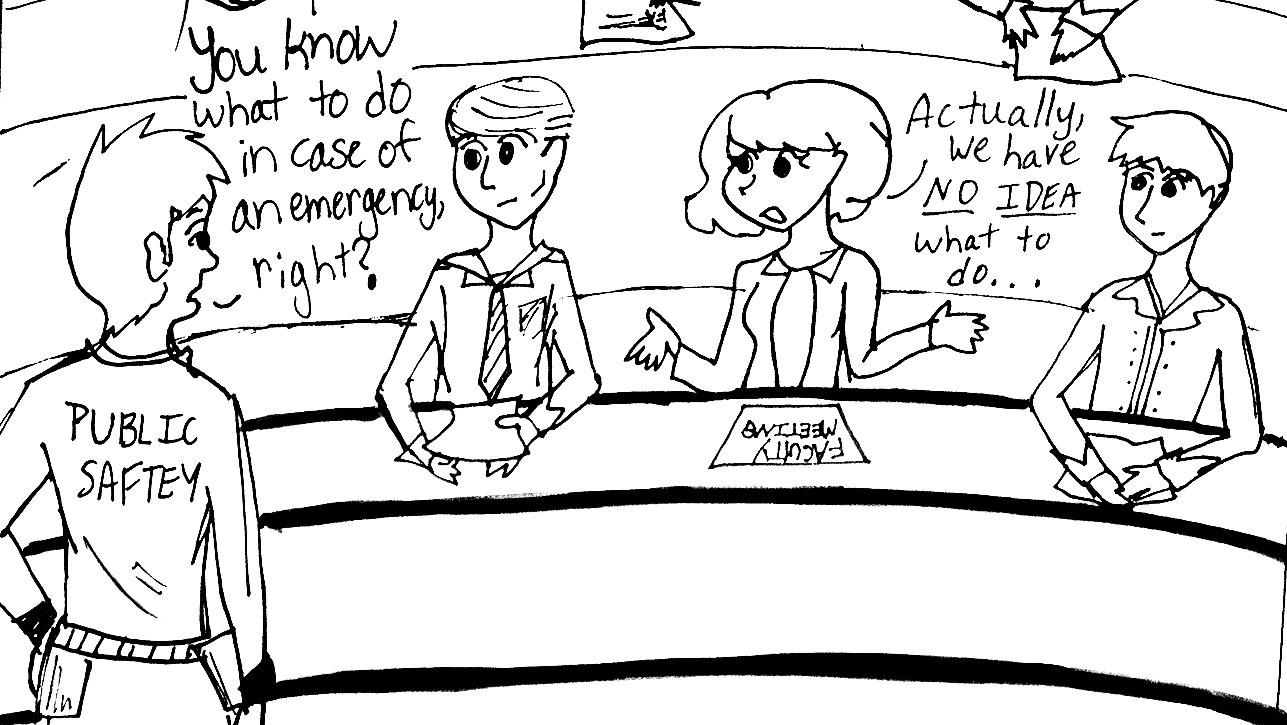 At Ithaca College, the Office of Public Safety and Emergency Management is responsible for creating a plan of action in the event of an active shooter situation. All Public Safety officers are required to have two weeks of firearms training before being authorized to carry a firearm, in accordance with New York state law. According to Jamie Williamson, public information officer of the Ithaca Police Department, the IPD and Public Safety work closely together and often train together because Public Safety officers receive the same training as municipal police officers.

The college’s Emergency Response Plan is available on ithaca.edu and outlines and instructs the campus community on what to do in case of emergencies, such as an active shooter on campus. The plan follows the National Incident Management System, which applies to all emergencies. Additionally, Public Safety regularly holds presentations on active shooter situations for faculty and staff, according to Deputy Chief David Dray. Dray also said Public Safety has a video on their website titled “Shots Fired” that gives an accurate portrayal of an active shooter situation and how to protect themselves. The manual is easily accessible online, but some faculty and staff have expressed that they were not aware of its existence and have not been formally trained to handle an active shooter situation in or outside the classroom. This is especially concerning because students are inclined to rely on professors and other authority figures for guidance in emergencies.

Although Public Safety is well prepared for emergency situations, faculty and staff are not as well prepared as they can be. The college should mandate active shooter situation training for faculty and staff because they spend much of their time with students. Hamilton College has conducted three active shooter simulations in the past five years, which is something Ithaca College should look into because a realistic simulation could better prepare the campus community for what to do if an active shooter were to be on campus.

Public Safety trains resident assistants to assess students’ well-being and mental health to look for warning signs. However, faculty and staff are not required to complete the same training. The Center for Counseling and Psychological Services offers Pathways training for faculty, staff and students, which teaches them to look for potential distress triggers and signs of distress so at-risk students receive the help they need, according to its brochure. Faculty and staff should be required to complete Pathways training.

Another problem the college and Public Safety should look into is re-examining buildings’ safety features. Classroom doors in Friends Hall and the Roy H. Park School of Communications cannot be locked from the inside, which means that professors would have to open doors to lock them, putting themselves and students in danger in the event of an active shooter.

Despite the aforementioned safety and preparedness flaws, Public Safety does an excellent job issuing alerts via email, phone calls and text messages to the campus community for events such as natural disasters or robberies on campus. Family members of Ithaca College students can also sign up for the same alerts so they are aware of any potential dangers on or around campus.