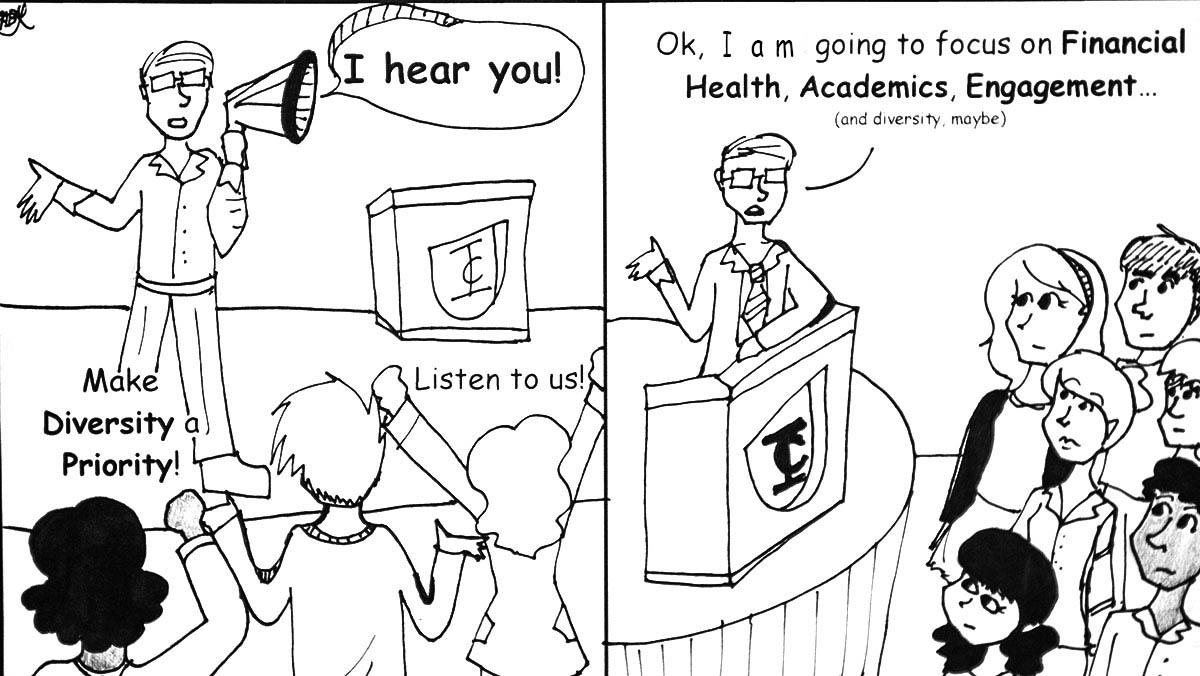 Based on President Tom Rochon’s stated priorities for the year-and-a-half remainder of his tenure, one conclusion is for certain: He has finally seen some light.

Not the light on what kind of change Ithaca College needs in order to address its issues of diversity and inclusion. Not the light on how to create policies that draw from the input of people who do not work in the Peggy Ryan Williams Center. But it does seem he has realized that he is not the right person to take charge of a diversity agenda.

Instead, since it is abundantly clear that the campus community does not trust him with diversity issues, he has decided to foster a better image by playing to his perceived strengths: areas like finances and engagement, where the Ithaca College Board of Trustees has long praised his credentials.

It must be acknowledged that under Rochon’s administration, the rise in tuition price came under a degree of control that even Cornell University cannot compete with. The percentage increase in tuition has flattened or decreased since his first year in office from 4.8 percent to 2.6 percent. From year to year, this percentage has decreased steadily since the 2011–12 academic year. The current 2.6 percent figure is the lowest increase in 70 years, according to Gerald Hector, vice president for finance and administration.

But while he is polishing his financial image, he should pay close attention to charitable donations to the college, which have risen and fallen — mostly fallen — in recent years. Two large gifts in 2013 were responsible for a significant uptick in total giving, but without those in subsequent years, the general pattern is one of decline, according to Chris Biehn, vice president for institutional advancement and communication. Given how tuition-dependent the college is for its expenditures, it is increasingly important to focus on this source of revenue.

Whether the college is worthy of these donations has been thrown into question — one that Rochon seems to realize he cannot answer, but one that his administration must continue to ponder by addressing the campus climate. Rochon may know he is not the right person to effect change in diversity and inclusion on campus, but this still needs to remain the priority of campus leaders and those administrators who will carry over into the next presidency.