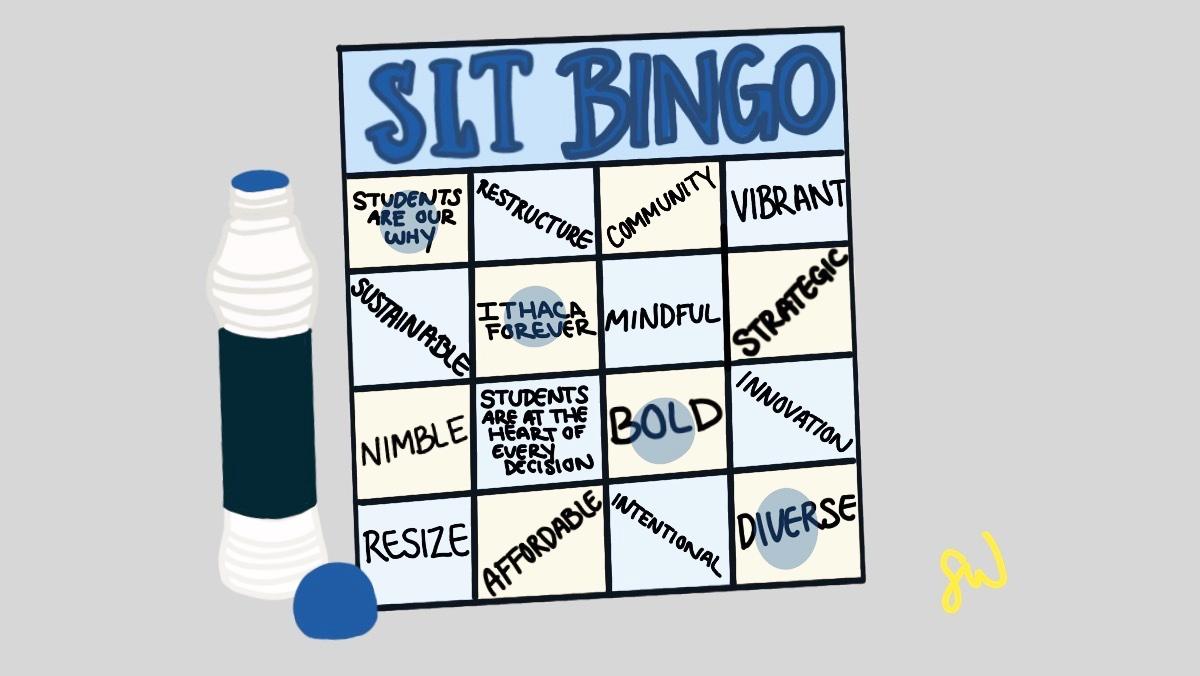 Redundant and infuriating — meetings with Ithaca College’s Senior Leadership Team (SLT) seem to repeat the same calls for transparency and the same placating responses. There has to be more that can be done. Are the right questions being asked? Why does the SLT seem to treat the members of the college community as children — calming them down with gentle and vague sentiments? The students at the college are adults, who in whichever way they can, are putting their money, time and faith into this college and into the administration. They should be spoken with and informed, not spoken down to and disregarded. When it comes to their education and their money, they should be placed above a need-to-know level.

During a seemingly frustrating meeting on Nov. 15, between Interim President La Jerne Cornish and the Student Governance Council (SGC), many of the same runabouts occurred. In response to the confusion with the emergency notification system — how it failed to inform the students at the college of the dangers that happened a few miles away at Cornell University and in Cayuga Heights until hours after the majority of students found out on their own through social media and word-of-mouth — Cornish’s best response was to tell us that the students are on a need-to-know basis. If the threat of gunmen at Cornell didn’t reach need-to-know status for students at the college, what will? The notification came late; the possibility that students from Ithaca College would’ve been endangered if they chose to take a stroll in Cayuga Heights or if they had friends at Cornell University or took a class there is a possibility that should’ve been avoided.

In response to the widespread mental health concerns among students across campus, Cornish said the college community must acknowledge that the students are struggling with their mental health. While acknowledgment is a good first step, it is far from enough. The college needs to hire more counselors for the Center for Counseling and Psychological Services, continue to amend the way that it handles students who are experiencing a mental health crisis and ensure that faculty realize that while academics are important, students’ well-being is what comes first. Students should not have to disclose the traumatic experiences that impact their mental and physical health and beg to get an extension on a paper, and faculty members must accommodate their students’ needs without asking for proof of a mental crisis from a student.

Speaking to an authority figure, especially someone in the highest position in the administration can be unnerving. However, the SGC is in a position of privilege; it holds power and responsibility. As representatives of the entire student body, it is important that the members communicate with Cornish and all SLT members with candor and even a little stubbornness when they get the opportunity to meet with them. The SGC should not have accepted the responses Cornish gave to its concerns and questions because she never provided any real answers, and most of the ones she provided were inadequate. While there should always be respect; there needs to be some persistence. The SGC cannot just ask questions, receive subpar answers and then move on. The SGC represents the student body, and the students are rightfully concerned and angered. It needs to step up and take a more firm stance when speaking to Cornish and other SLT members or else what is the point of in-person meetings? At that point, send a list of questions to be answered in an email sent through Intercom. It will probably get to the students before any news of danger does.