Editorial: The solution is more inclusion 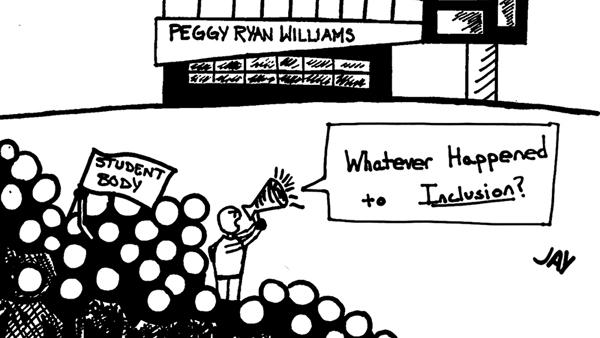 The Student Government Association has demanded the results of the Campus Acceptance, Inclusion and Fairness Survey, which Ithaca College administered to measure inclusivity on campus. But with the administration failing to release the data, the SGA is forming a task force to tackle microaggressions, or behaviors that create feelings of exclusion, and foster a larger dialogue around issues of identity. The time to address identity inclusivity is now.

The campus-climate survey is part of the college’s diversity strategic plan for IC 20/20. Other goals include improving the student life experience for African, Latino, Asian and Native American and lesbian, gay, bisexual and transgender students, as well as creating a physical environment that celebrates and recognizes diversity. By not releasing the results, the college pushes the task of acknowledging exclusivity onto affected students. But students who experience microaggressions should neither have to demand the college implement structures to educate the campus community, nor take on diversity educator roles alone.

Testimonies to the SGA have indicated that students who identify with minority ethnic, racial or sexual groups suggest they feel marginalized by classmates and faculty. The microaggressions they experience affect their behavior in the classroom and around campus. Students who identify with conservatism or less prominent religions, like Buddhism or Wicca, and students with disabilities have also found it difficult to express themselves fully.

With the SGA’s recognition of the problems with exclusivity, the college community must begin a dialogue surrounding inclusivity by recognizing our problems and discussing them candidly, or risk further alienating students.