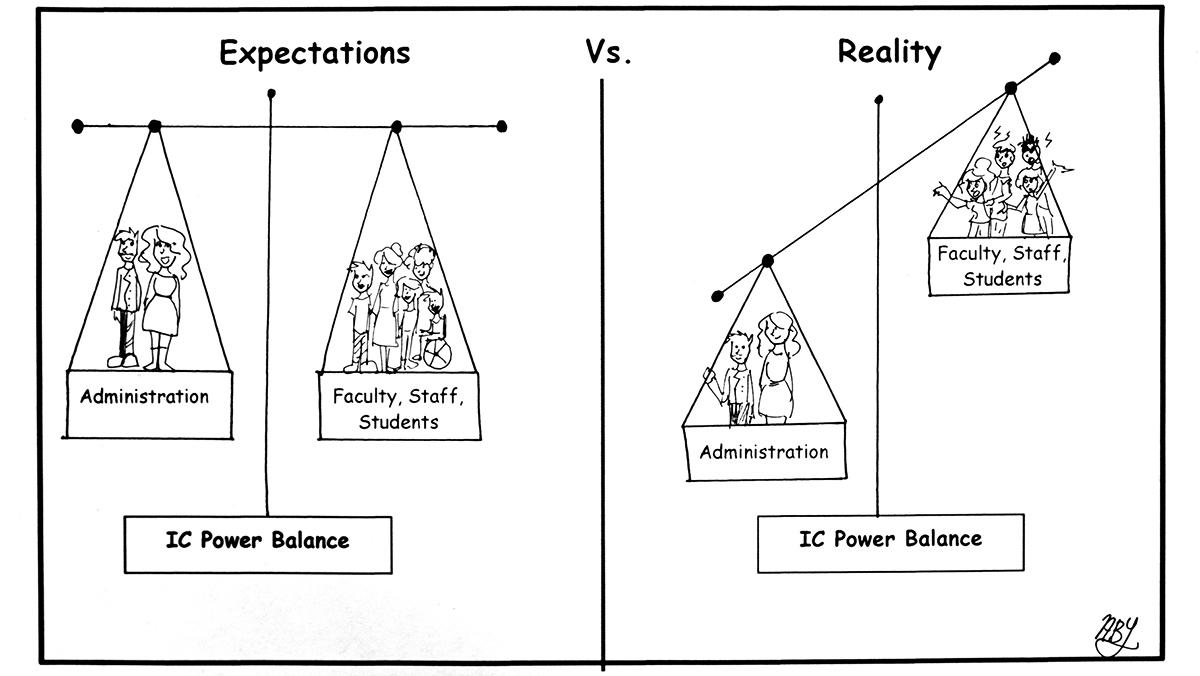 Though the release of a new charter paints the picture of an improved shared governance model, the vision in the document is not one of actual shared governance. Many problems with representation and power still exist, leaving the power centralized with the president’s office.

According to the charter, all policy proposals are approved by the president of the college, the President’s Council or the vice president. The charter states that “the Board of Trustees is the final institutional authority.” By having proposals dependent on the approval of those at the top of the ladder, there still has been no shifting of power from the top down — power still rests with these authoritative figures.

The charter states that all policy proposals submitted will be vetted through the College Governance Council, which will then decide if the proposal should be submitted to the President’s Council, the vice president or the president. Previously, each representative constituent council could make recommendations directly to certain administrators, as specified by their respective bylaws.

Proposals from the upper administration, however, do not have to go through the CGC in this proposed draft, leaving the administration out of the vetting process. In addition, there are no stipulations about what the president’s council would have to do with the proposals.

Creating a central committee through which proposals from constituent councils are vetted is a step forward in establishing consistency with how proposals are brought to the administration, but not if the administration is not held to the same standards. There is no logical reason for the administration to not subject its proposals to the same committee that was created to better distribute decision-making on campus issues. A shared governance structure should decentralize power from the top, and having administrative proposals go through the CGC, like everyone else’s, would help accomplish this. The movement of these proposals should be a clear, transparent path from start to finish.

To improve, the Shared Governance Task Force should re-evaluate the balance of power between the administration and the rest of the community. Upon review of the new Charter on Shared Governance, it is clear that the true vision of shared governance, one that is decentralized, has yet to be achieved.

Having no clear vision to propose to the community provides little motivation for people to get involved and contribute to this vision — a vicious cycle of counterproductiveness.

Editorial: Shared Governance is a necessity for the college