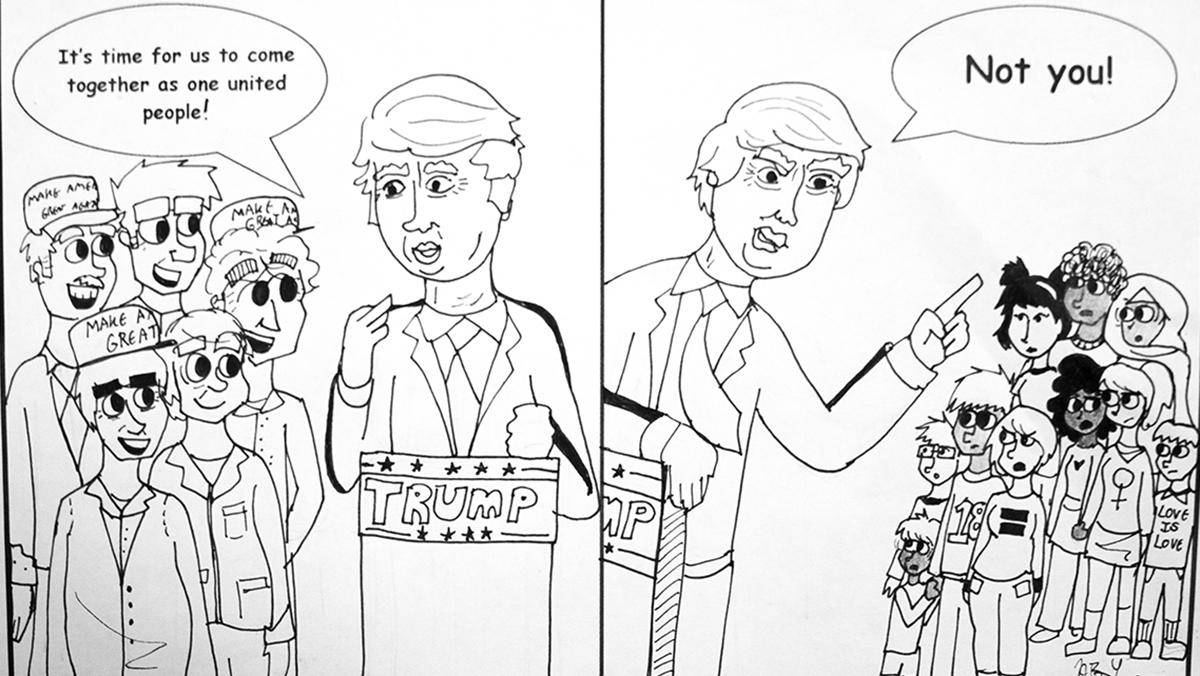 Dark clouds hung heavily in the sky over many students the morning of Nov. 9, at Ithaca College and elsewhere.

Throughout the past year, young people readying for their first election watched a man belittle immigrant populations and brag about sexually assaulting women. Then Tuesday night, they watched him walk onto a grand stage with balloons and applause, nearly tearing up, to give his first speech as president-elect of the United States.

Others rejoiced boldly, in public and on social media, interspersed among the long list of Facebook statuses and tweets of heartbreak and shock.

As a principle, The Ithacan does not endorse candidates, and did not do so in this election. However, a historical electoral upset such as this one warrants a reaction to our country’s selection — a reaction of utter repulsion toward the man who has openly expressed contempt for minorities, women and matters of basic decency.

The results of this election were considered a shock. It wasn’t supposed to happen this way — said the polls, the pundits, the reporters, the public. But to people of color, women, people with disabilities, immigrants, LGBT people, Muslims and the countless groups that have been victimized by Donald Trump’s rhetoric, his win was a confirmation of how easily they, their interests and their fears can be cast aside. His supporters, by voting for him, amplified their interests while forgetting about the legitimate concerns of these marginalized groups —  an indifference that is just as destructive as hatred.

Trump’s victory has reinforced fear in those he so readily vilified: the fear of deportation, the fear of having one’s human rights taken away from them. This fear cannot be brushed aside. It must be faced head-on, particularly by those who are privileged enough to not feel frightened and who must come to terms with what a Trump presidency means for millions of people.

This result showcases both a deep divide that already exists within the country and a new one widening between voters on each side. We all underestimated the base of support that Trump appealed to: those who have lost their jobs and economic stability, those who feel they have been left out of the system and abandoned by the government, and who feel that Trump is their answer.

With Trump’s win, it would be a disservice not to recognize the ways in which white hegemony, racism, homophobia, sexism — hate in its many forms — operate and run this country. The lack of empathy for people of other identities has been made abundantly clear, and it is also clear that there are many people in this country who must confront their own complicity in Trump’s victory — people who may not have been impacted by his rhetoric but subsequently failed to see how it impacted others.

The time for remorse has passed. Playing the blame game will not change anything, and neither will the self-righteous cacophony of “I told you so.” Now is a time for organizing, for joining social movements and participating in grassroots movements across the country that champion human rights and progress. It is a time for reckoning, for acknowledging that we have a system that privileges certain groups over others, a system that has stripped millions of people of their voting rights on Election Day. It is also a time for unlearning, for deconstructing the poisonous ideologies that lead to the othering of certain groups and labeling them as second-class people.

It can be difficult to even fathom what moving forward looks like. But move forward this country must. Overcoming the hateful ideologies that helped put Trump in the Oval Office will not happen overnight, but it relies on the passion to achieve true progress. It requires realizing the struggles experienced by many marginalized groups in this country and fighting for recognition of their humanity. Together, we must reject the hatred that has fueled Trump’s campaign and not pretend that it will simply go away of its own accord. Apathy is the enabler of hatred, and it is what this country must reject if we ever wish to charge ahead.

This election has changed our national discourse in ways that couldn’t have been predicted even four years ago.

When one is accustomed to privilege, equality feels like oppression.

How privilege and ignorance protect racism