From the Editors: The Ithacan stands against antisemitism 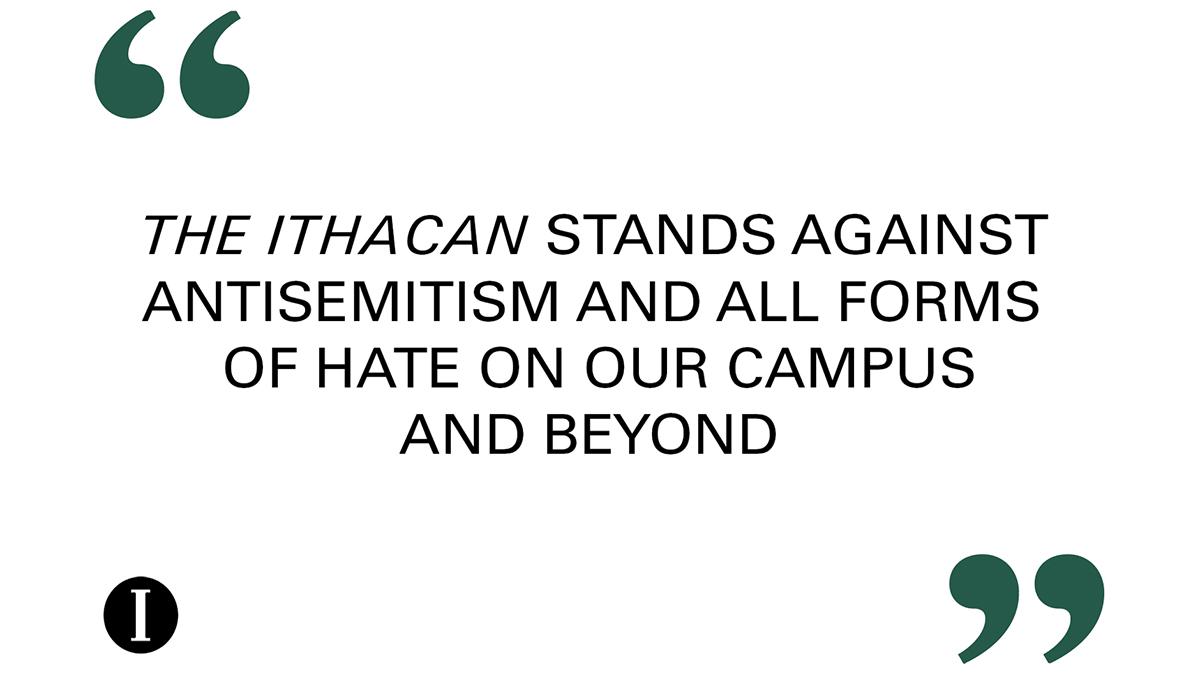 Malik Clement/The Ithacan
The Ithacan stands against antisemitism and all forms of hate on our campus and beyond. The Ithacan strives to be a place where all members of the campus community can share their thoughts and opinions and welcomes people to submit commentaries or open letters expressing their views on this issue.
By The Ithacan
Published: November 8, 2022

Eight swastikas in 2022. Even one is too many, but eight swastikas have been found on Ithaca College’s campus since the beginning of the calendar year. This behavior is unacceptable and cannot be tolerated on our campus or beyond.

Ithaca College is home to a diverse range of opinions and backgrounds and has a large Jewish student population as well as robust Jewish life. Members of The Ithacan’s editorial board have attended Hillel at Ithaca College’s events and have felt the welcoming Jewish presence on campus. It is frustrating, disheartening and disgusting to have learned about the multiple swastikas that have been discovered on our campus this calendar year alone.

Antisemitism has been rising over the past few years across the United States and colleges are no exception to this rise in hate. The Public Safety alert notifying the campus community of three swastikas Nov. 4 came a day after the FBI announced there was a broad threat to synagogues in New Jersey. Jewish on Campus (JOC) is an organization that tracks antisemitism on college campuses across the country and in 2021 received 544 submissions reporting antisemitism. Of that, 11% of the reports made were from New York, totaling 55 reports.

Whether these swastikas were drawn with malicious intent or if they were the outcome of what a student thought would be a “joke,” they are unacceptable and not welcome on this campus.

Swastikas never have been and never should be a joke to anyone. Only 19 states require Holocaust education in public school. This could lead to a harmful decline in Holocaust education, leaving future generations with no knowledge of the genocide that happened when many of our grandparents were children. A Pew Research Center survey from 2020 found that only 45% of American adults knew that 6 million Jewish people were killed in the Holocaust and 29% were not sure how many were killed. Continued education is not only necessary but important to ensure that this genocide is not forgotten and never happens again.

The Ithacan appreciates the college’s stance against antisemitism in the wake of each of these swastika incidents, however, clearer outlines need to be made regarding the consequences of drawing hate symbols on campus.

The Student Conduct Code (SCC) states that “no student shall be discriminated against on the basis of race, color, religion, sex, sexual orientation, gender identity or expression, age, marital status, familial status, national origin, or disability.” But, when it comes to sanctions, there is a wide range from a written warning to expulsion. If the suspects are found, it is not overtly clear what the sanctions would be as sanctions are determined on a case-by-case basis.

The Ithacan stands against antisemitism and all forms of hate on our campus and beyond. The Ithacan strives to be a place where all members of the campus community can share their thoughts and opinions and welcomes people to submit commentaries or open letters expressing their views on this issue.

The Ithacan Editorial Board