Commentary: Focus should be on inclusivity in student spaces 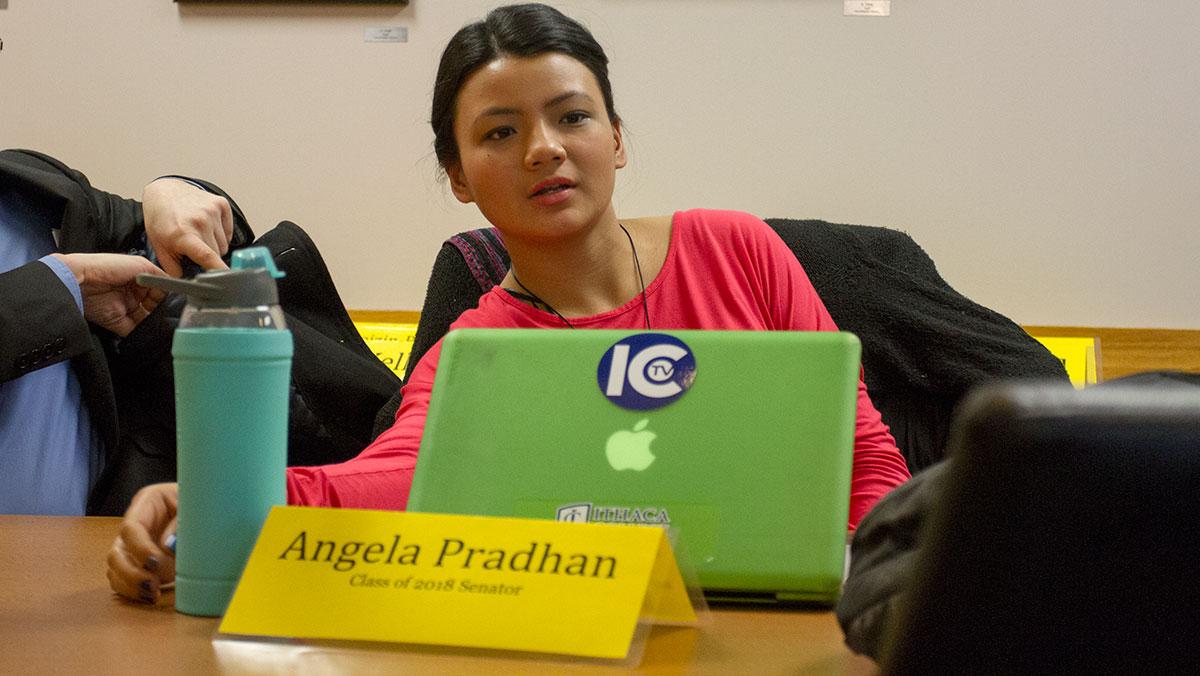 Kaitlyn Kelly/The Ithacan
Class of 2018 Senator Angela Pradhan sponsored the bill the SGA passed. The bill called for the implementation of a campus-wide online system to report microaggressions at the college.
By Angela Pradhan
Published: April 22, 2015

Amid the debate over legalities and freedom of speech, in the controversy surrounding the Ithaca College Student Government Association Microaggressions Reporting System bill, two important structures have to be recognized, understood and brought to center stage.

The way the first structure, the college’s SGA, currently works, the proposal for a microaggression reporting method was approved by the senate as an initiative to develop, not a full-fledged method already constructed and not by any means executed immediately. In the seven points of the bill, not one line states nor hints that legal action and punishment will be taken, evident to anyone who reads the bill. Legalities was just a point of discussion during the senate meeting but has been incorrectly spun as the central purpose of this bill.

The second much larger and more complex system impacts bills and policies that are written at the collegiate level and beyond. Our current patriarchal, predominantly white and able-bodied academic structure uplifts members of these very groups to the detriment of women; African, Latino, Asian and Native American; disabled; and LGBTQ+ students. People who fit into the latter groups are lumped together and classified as “minorities.”

While already trying to work within an inequitable system, members of minority groups must also educate those around them about inclusivity in order to go about their daily lives. This is unjust to the livelihoods and mental health of students from these marginalized communities. This also poorly prepares the next generation of students for a world where insensitivity and intolerance will become barriers for personal and professional growth.

Although many people do not see these inequities, they exist inside and outside of the college setting. Academic institutions mirror the United States’ hierarchical political, social and economic systems that work to maintain power dynamics while relying on the public to stay in the dark about issues of systemic inequality.

Education will combat ignorance, but only in conjunction with action. The only way that others can be educated on these issues is if we know where to target educational resources, be it inclusivity training for faculty or adjusting the residential life experience.

Currently, there is no institutional proof that such marginalizing incidents even exist at the college. Documentation will allow the college to gauge how frequently such instances occur, where resources should be allocated in order to move toward an inclusive education and make sure student voices are heard and accounted for.

Individuals who are attacking the bill’s proposed initiative by rallying for free speech are actually implying they value the voices of advantaged groups more than the voices of individuals who have been systematically silenced and who may finally be recognized. By saying freedom of speech is being limited by collecting data, you’re ironically silencing voices that are trying to state their concerns with instances that have occurred on this campus.

Since the bill’s controversy, small steps have already been made toward more inclusive education. If a documentation method is implemented along with other initiatives, Ithaca College students will graduate with more awareness as they enter a competitive workplace where students must interact and connect with a multitude of cultures other than their own and people from all walks of life. That’s worth reporting.

Angela Pradhan is a freshman journalism major and Class of 2018 senator for the Student Government Association. Email her at apradhan@ithaca.edu.