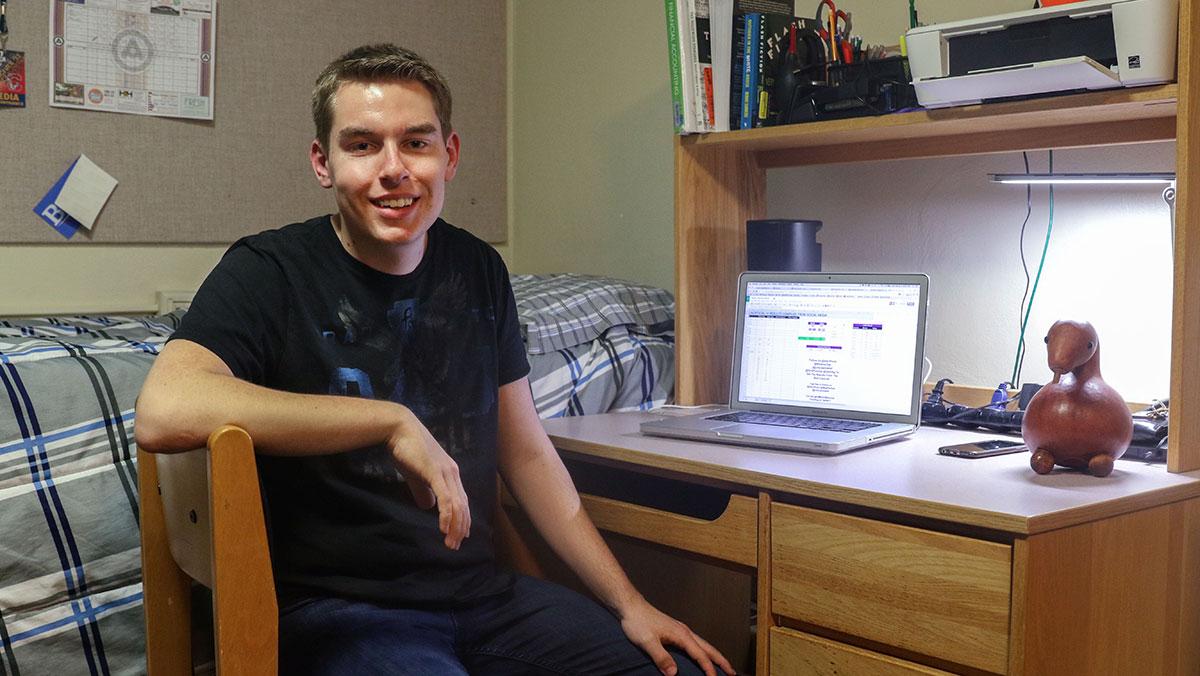 Kayla Dwyer/The Ithacan
From his dorm room, Alec Salisbury was the first in the nation to predict the Hawaii caucus results.
By Kayla Dwyer — Opinion Editor
Published: March 28, 2016

An Ithaca College student beat mainstream media to the punch March 26 in predicting Bernie Sanders’ landslide victory in Hawaii — with the help of Twitter, Reddit and Google Docs.

Sophomore Alec Salisbury created a Google Sheet to track the caucus results in Washington, Alaska and Hawaii, where the Democratic Party of Hawaii was three hours late in reporting the results. Salisbury’s projections were within 1 percent of the results projected later by The Associated Press. Salisbury, a cinema and photography major, and about 10 other collaborators used caucus-related posts on Twitter and Reddit and corroborated information with other sources to collect their data.

Opinion Editor Kayla Dwyer spoke with Salisbury about how he did it, why he did it and what his future plans are.

Kayla Dwyer: Is this the first time you’ve tracked caucus results yourself, and so closely?

Alec Salisbury: Yes, it was.

AS: I was waiting for the Hawaii results and needed something to do. But also because I had seen it attempted once before by another group of people on Reddit, but I don’t think it was very successful. I don’t think they put in effort to get a good estimate, but that’s where the inspiration came from.

KD: Why this set of caucuses in particular?

AS: I saw the opening, I guess. There had been talks on the forums on Reddit that someone should make a sheet, so I was like, “I’ll do it.” So I threw a sheet on there. I originally had it “public” so anyone could write on it, and I put a little troll section so people could mess around and not tamper with the results. That didn’t last very long, though — it was about 20 minutes in and results started getting deleted, and I was like, that’s not going to happen. But in Google Sheets, you can revert it to where it was, so I just restored it and made it unlisted so people could view it but not comment. Then I went back into the Reddit thread and said, “Hey, if you wanna help me on the sheet, send me your email.” So I got about 10 people and gave them edit privileges so they could edit and help out.

KD: Were you nervous about trusting people you don’t know?

AS: Not really, it was pretty straight forward. Just searching through tweets or through Reddit comments, people were saying, for example, “Precinct 02-01, Bernie 171, Hillary 128” or whatever. If I had the time, I would verify it to see if I could see it more than once to kind of back it up, but it was just an estimate, really.

AS: Yes, and on Facebook. There were some Facebook events, like “Vote for Bernie.” People have done what they call “Facebanking” — there’s a tool where you can search my friends who like Bernie Sanders and live in a certain state, or my friends of friends who like Bernie Sanders and live in a certain state, so you can find all those people, and there’s a little bookmarklet that you can copy all the names, and you can go to the event, click a button, and it invites them all. You can make a notification the day of, and they get invited to the event, so it reminds them to go vote. So people in those threads were posting the results from each caucus that they were at, so that was so helpful in finding results. It’s kind of a Reddit grassroots widget that was made to facebank — it’s like phone bank.

KD: How did you keep track of all of the caucuses?

AS: I didn’t get all of them — I got 60 percent. What we did was we went, and we found online the official democratic websites. They had the lists of the caucus locations, the precincts, so we input that as a template into the Google Doc so we could just put it in and so we could check before we put something in that we had it already. We didn’t do that for the Washington one because that was the first one that we did, and we kind of just started putting in what we found. That’s why it had duplicates, and that’s probably why we were off by about 6 or 7 percent in the Washington results. But we were pretty dead on for Hawaii and Alaska.

KD: I have to believe you weren’t the only person doing this sort of thing.

AS: There was a group that was doing it with the Washington results through Dropbox, and they sent out a link. They had 30 or 40 precincts in, so I started cross-referencing from there. They didn’t have it public; they were just sort of doing it for their own fun.

KD: Why did you do it, though? Where does your interest in politics come from, as a cinema and photography major?

AS: I like the whole mass scale of it. I find that to be intriguing — the whole influencing public opinion is very interesting because everyone has their own reasons for believing what they believe, and it’s fun trying to understand why people decide to vote for a person, decide to back a policy.

KD: Are you going to do this again?

AS: Yeah, we’re already planning it — the other three people who were really helping out.

AS: We’re not sure how we’re going to do it. We have two weeks to figure it out. I think we’re going to try to get a better way to have the results come in, maybe like have people reach out to people who we know in the caucuses, so they can submit a form somewhere. I want to figure out how to put an analytics page on the Google Doc so I can figure out how many people view it. … I had a new notification on Twitter every three seconds for like 8 hours.

KD: How do you feel after all is said and done?

AS: I’m happy it helped. I’m ecstatic it was so accurate. And now I’m exhausted.