Rochon’s 2011 salary increase represents a disconnect from students, faculty and the rising cost of an education 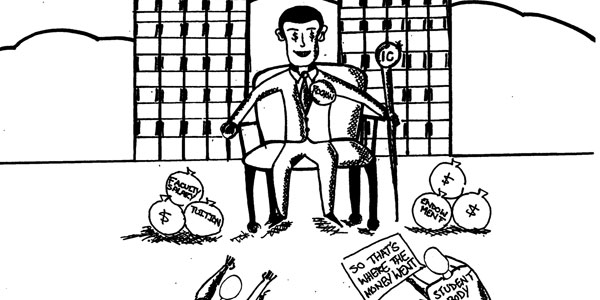 Ithaca College’s 990 form, which provides the IRS with information about our tax-exempt institution, for the fiscal year of 2011 indicated that President Tom Rochon received a 12.2 percent salary raise, bringing his total compensation to $557,053. Meanwhile, faculty and staff received a 2.5 percent general merit increase from 2012–13. The discrepancy in wage increases, in light of the rising tuition and decreasing endowment funds, indicate Rochon’s lack of connection and solidarity with the students and faculty at large.

Rochon’s raise is not very significant in the grand scheme of the college’s finances. As president of the college, it can be argued that he should be paid more than the average faculty member. While his base pay is 3.6 times the average full-time professor’s salary, redistributing his raises will have little effect on the college as a whole. When a single student’s tuition this year totals $52,300, cutting Rochon’s salary by as much as half would not significantly relieve this price tag.

However, his raise is symbolically important. The cost of attending the college has risen by about $8,460 since 2009, the college’s endowment has decreased from $237 million in 2007–08 to $202 million in 2011–12 and faculty general merit increases have dropped from 3 percent annually to 2.5 percent. Rochon’s pay raise, and his unwillingness to address it, indicate a disconnect with the problems of his students and employees.

The administration has tried to mitigate the increasing cost of a higher education, but measures like the closing of the Rochester Center require immense sacrifice from students and faculty. Rochon and the administration cannot reasonably expect students to accept these changes while allowing their president to receive disproportionate raises.