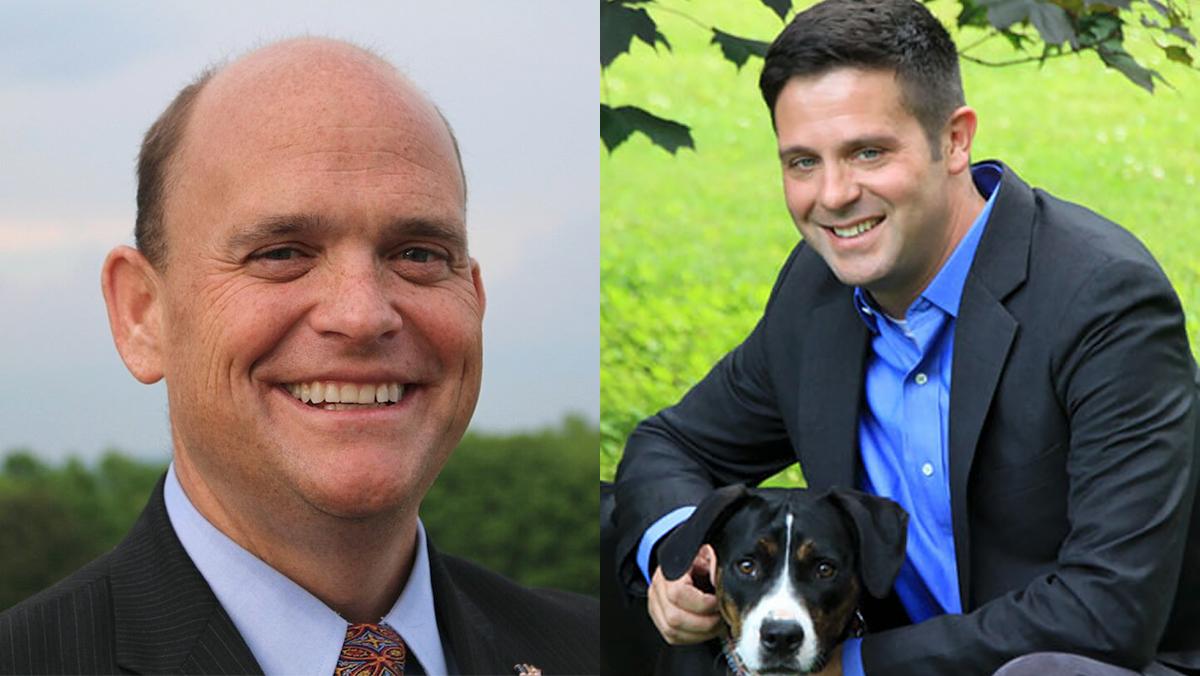 Courtesy of Tom Reed and johnplumb.com
From left, Rep. Tom Reed (R-NY) is looking for a fourth term in the House of Representatives. His challenger John Plumb is looking to unseat him.
By Ryan King — Staff Writer
Published: November 2, 2016

With all the coverage of the presidential election, it can be easy to forget about all of the down-ballot races, which can sometimes be just as consequential. In Ithaca, residents will soon have the opportunity to vote on who will represent them as congressman for New York District 23 in the House of Representatives. For those voting, it is important to make informed decisions at the voting booths.

Incumbent Rep. Tom Reed (R-N.Y.) is currently serving his third term in Congress, but he said the job he started in 2010 is not yet done.

Reed said he hopes his record will help him get re-elected to a fourth term in Congress. Govtrack ranks him in the top 10 percent of all representatives for writing bipartisan bills and shows that he has sponsored over 115 bills throughout his tenure.

With less than a week left before the election, contributing writer Ryan King spoke with Reed about his bid to win re-election, his positions on pressing political issues and his thoughts on the presidential election.

Ryan King: Which committees would you serve on in the House if you were to be re-elected?

Tom Reed: I’m on Ways and Means and would stay on Ways and Means going forward. That is a critical committee — it is a committee that is the only committee in the Constitution. It is the oldest comprised committee in the House and it is the committee that writes all the tax policy, health policy, trade policy, and social security retirement policy for America. So we have broad jurisdiction. Paul Ryan was our chairman. We’ve had a rich legacy of leaders in the House, and in Congress serve as members of the Ways and Means committee and the chairmans of the committee. So I would like to carry on that tradition of being in a position to help people in the 23rd Congressional District with what we can do on tax, trade, health, and retirement and Social Security policy.

RK: How will you help create jobs in New York and around the U.S.?

TR: First, I would piggyback on the success we had with the Revitalize American Manufacturing and Innovation Act that we got signed into law … That’s led, for example, right in our backyard, with public and private partnerships, to an over $600 million investment in the region for an advanced manufacturing center focused on the science of light. … I am for a manufacturing environment in that I believe we are on the precipice of bringing back to American soil. And then on a broad level, I believe that one of the things we can come together on is to fix our broken tax code.

RK: What should Congress do to help college students afford tuition?

TR: Long-term, what I am definitely interested in doing is utilizing the endowment space in the tax code … [and] essentially require 25 percent of that tax reaccumulating income go to working families’ tuition reduction for the men and women that fit in that band to really try to lower the tuition costs for them and then also make sure we’re having the 990 IRS forms that are required to be filed by these colleges and universities be much more simple and accessible so that people can use transparency to ask the right questions as to where is the money going? What are you doing with this tax-free tax deducted dollars that are coming into your coffers? Where’s the tuition dollars going? And so, have things like salary transparency, have things listed like we uncovered.

RK: My understanding is that in the presidential election, you support Donald Trump. How do you respond to criticisms about his temperament and some of the offensive comments he’s made in the past?

TR: I do support Donald Trump because we’re living in the real world where we have two candidates that we’re choosing between, Hillary Clinton and Donald Trump, and to me, Donald Trump represents the best opportunities for change. He brings the disruption type of mentality to Washington, D.C. that Washington, D.C., in my opinion, so desperately needs. It needs to break up the establishment, it needs to break up the entitlements of decades folks that have created networks in D.C. that is just so entrenched against the change that is necessary to grow the economy to put the American people first. … I feel like Hillary Clinton’s background and her record, to me, she is a status quo candidate. She is fully entangled in that establishment.

RK: It appears to me that the Republican Party in Congress is very divided between the Freedom Caucus or the Tea Party wing of the party, and the Paul Ryan and more moderate wing of the party. Which side of that divide are you on and why?

TR: I believe I am a problem solver; that is why I am co–chair of the problem solver caucus. It’s a formal caucus of Republican and Democratic members. Really it’s the only caucus … that gets together on a regular basis to talk about issues and about policy and solutions on a regular basis where we just sit down with really no black-and-white agenda, just talk about the issues of the day and find that common ground. … I would put myself in the camp of a member who is trying to resolve issues.

Challenging incumbent Rep. Tom Reed (R-N.Y.) in the District 23 election is John Plumb, a Navy veteran who later worked as an official for the Department of Defense and as a staff member for the National Security Council. He is running as a Democrat and said he wants to help fix “a broken Congress.”

With less than a week until the election, Contributing Writer Ryan King spoke with Plumb about his bid for Congress, his positions on pressing political issues and his thoughts on the presidential election.

Ryan King: In an ideal world, which committees would you serve on if elected to the House?

John Plumb: I would look to be on the Armed Services Committee because of my national defense background. I think the country needs strong, reasonable voices that understand that national security is not a game. And so I think I could be very helpful there, and also, it would be a way to help serve the thousands of men and women who serve our country from this district in active duty and the 50,000 vets here, too. And then Energy and Commerce would be the other good committee to get on, because one part of my jobs’ plan for the district involves pushing really hard on clean energy and reusable energy technology.

RK: How will you help create jobs in New York and around the U.S.?

JB: I will just be very clear, my focus will be primarily on jobs in New York’s 23rd, which not only is not all of New York, but it’s not all of the country. I think policies that would benefit New York’s 23rd would benefit other rural areas, but my focus will be here. For example, one of the biggest problems facing this country from the Congress is the inability to recognize science as something that should inform their policies … One, I will fight against that nonsense, and two, if I were to really push on addressing climate change, that would be a natural path to push on clean energy technology, and I think that our rural areas could really benefit from that. Third, I think our rural districts are being disadvantaged when it comes to federal contracts; I think they are being left behind. As we all know, a lot of these benefits accrue in cities, and I think we need to have someone that champions legislation to ensure that our rural areas are being protected, too, and not constantly being left out of equations when these contracts are being developed.

RK: What should Congress do to help college students afford tuition?

JB: My proposals are simple: One, you should be able to finance and refinance your debt at competitive rates. This is actually not possible right now. Some of this is actually blocked by legislation from Congress, which again if you are only looking out for Wall Street, that makes sense. If you are looking out for our students, you would have a different result. Another problem is that if you need to refinance your debt to a lower rate but you are not in a good financial situation, then you really can’t finance at a lower rate anyway, so that’s a problem. The second thing that needs to be fixed is if you could pay off your student debt as a percentage of income. Let’s say it’s 10 percent or 8 percent of your income, but then no matter what your income is, it won’t cripple you to have to pay off your debt.

RK: My understanding is that you support Hillary Clinton. Why and how do you respond to criticisms about the misuse of classified information?

JB: I will be voting for Hillary Clinton, and I am not going to defend her use of that server. That is a terrible mistake that I can’t and won’t defend. At the same time, I will tell you that I cannot support Donald Trump. I cannot support someone who criticizes families of fallen soldiers. I cannot support someone who makes fun of disabled people, and I certainly cannot align myself with someone that boasts about sexual assault and then denigrates his accusers. I find him wholly unfit to be commander in chief and wholly unfit to become president of the United States.

RK: There is a division in the Democratic party between the Sanders-Warren wing and the Clinton-moderate wing. Which side of that divide are you on?

Some student voters decide to register in Tompkins County