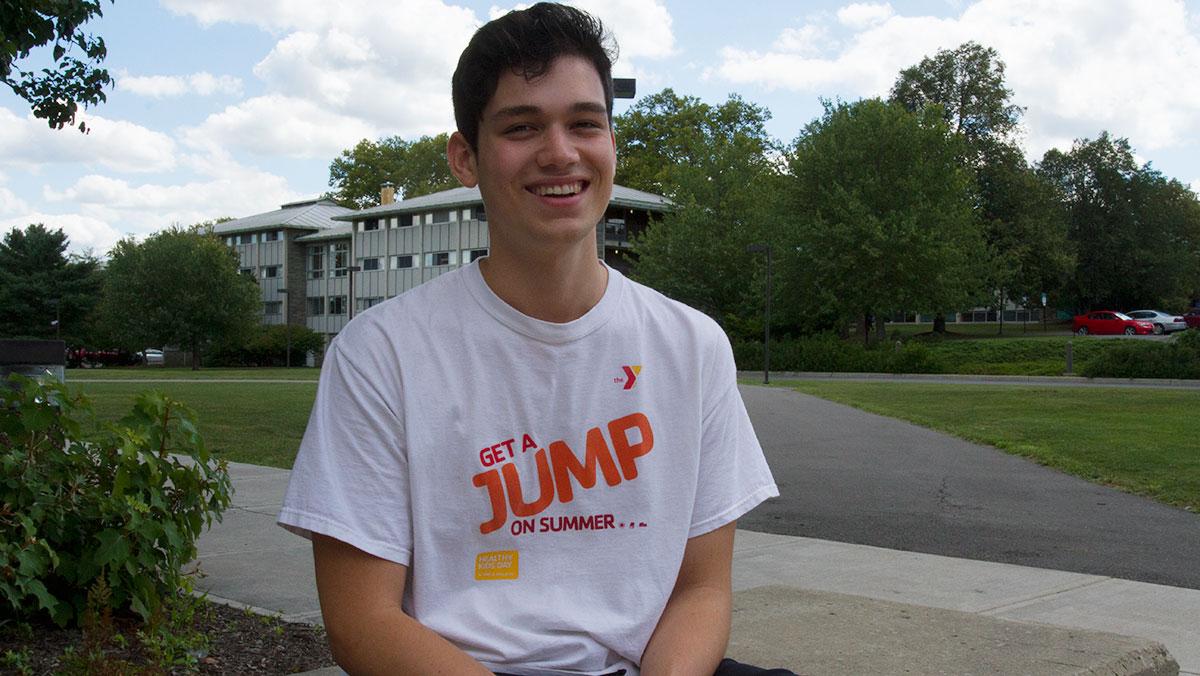 Yana Mazurkevich/The Ithacan
Sophomore Luis Torres worked with Do Something to petition for the changing of the dictionary definition of the word "nude" in Merriam-Webster. After seeing the support, Merriam-Webster altered the definition to be more inclusive for people of color.
By Natalie Shanklin — Opinion Editor
Published: August 26, 2015

On July 14, otherwise known as National Nude Day, Luis Torres, an Ithaca College sophomore, collaborated with the nonprofit organization Do Something to change the Merriam-Webster dictionary definition of the word “nude” to be more inclusive for people of color. Merriam-Webster originally defined “nude” as “having the color of a white person’s skin.” After Torres posted his “Nude Awakening” campaign on DoSomething.org, which gathered support from 820 online commenters, Merriam-Webster rephrased its definition to be “Nude: having a color (as pale beige or tan) that matches the wearer’s skin tones (2) : giving the appearance of nudity.”

Opinion Editor Natalie Shanklin met with Torres to discuss what the process of changing the definition was like, his thoughts on Eurocentric beauty standards and other troubling social issues.

Natalie Shanklin: What inspired you to advocate for the changing of the definition of the word “nude”?

Luis Torres: I actually first started thinking about the idea under the context of Band-Aids. You know how Band-Aids, they’re not advertised as being nude, but they are still nude for all intents and purposes. They’re all just the color of beige — white people’s skin. So for Do Something, you need to have a ton of research backing up your campaign, like why it’s important, so while I was doing the research, I came across a petition on Change.org specifically for the word “nude,” and we thought it’d be super cool to do a more interactive form of petition versus the Change.org where it seems more passive.

NS: How did you go about it?

LT: I actually did it all overnight. [At Do Something,] we pitch on Mondays new campaign ideas on Periscope, which is this new online platform where members can actually come in and weigh in on our ideas. The date that it launched was on National Nude Day. We wanted it launched on that day because it’s super relevant and quirky. So I had to get everything done overnight. It was just kind of proving that Eurocentric standards of beauty are detrimental to people of color’s self-esteem and confidence. So that’s the biggest part — rooting it in actual problems in our society.

NS: Were there any people who spoke out against you?

LT: Nobody was actually vehemently opposed to the idea of changing the definition. They were more like, “Oh, it’s a waste of time. Who cares what a dictionary says?” So it was more of people just thinking that it was a pointless act.

NS: What was your reaction to the changed definition?

LT: I’m very happy with the new definition. I think the new one is super inclusive with broad language. After [Merriam-Webster] reviewed all the comments, they saw that it was an archaic definition and very narrow.

NS: What larger issue do you see this being a part of?

LT: I definitely think it ties into the idea of Eurocentric beauty standards being detrimental to people of color and also just the overall marketing that’s geared toward white people. It’s a small microaggression, the word “nude” itself. It’s a manifestation of all the ideas we have as a society. Not having bras, Band-Aids, underwear or dresses or anything that is a garment that is considered nude — having them very restricted to white people’s skin tones is one part of a larger issue of people of color being excluded for no reason.

NS: What are your thoughts on language and how it affects social issues?

LT: Language is the basis of how we connect to people, so I think it’s super important. Any word can become hateful if used correctly. So I think it’s important to not be overly sensitive but also to recognize that words do make a huge impact on the human psyche. As a white person, you might not understand why the word “nude” being defined that way is important, but you have to understand why it might be important to someone with a different perspective.

NS: What other issues are you passionate about?

LT: Right now, a huge issue I’m very into is LGBTQ rights within immigrant populations, so undocumented [lesbian, gay, bisexual and transgender] people, specifically people of color because they face huge disproportionate rates of discrimination. Also, up until recently, trans people were housed in prisons with their birthed sex versus their identifying gender. And they face huge amounts of sexual abuse — rape — even by guards who are in prisons. This year has the highest rates of trans people being killed in recorded history. I’m also very into the Black Lives Matter movement. But as a white person, it’s also very important to be cautious of stepping on people’s toes; so while I can support the Black Lives Matter movement, it’s important for white people to be cautious in integrating themselves and dominating a conversation.