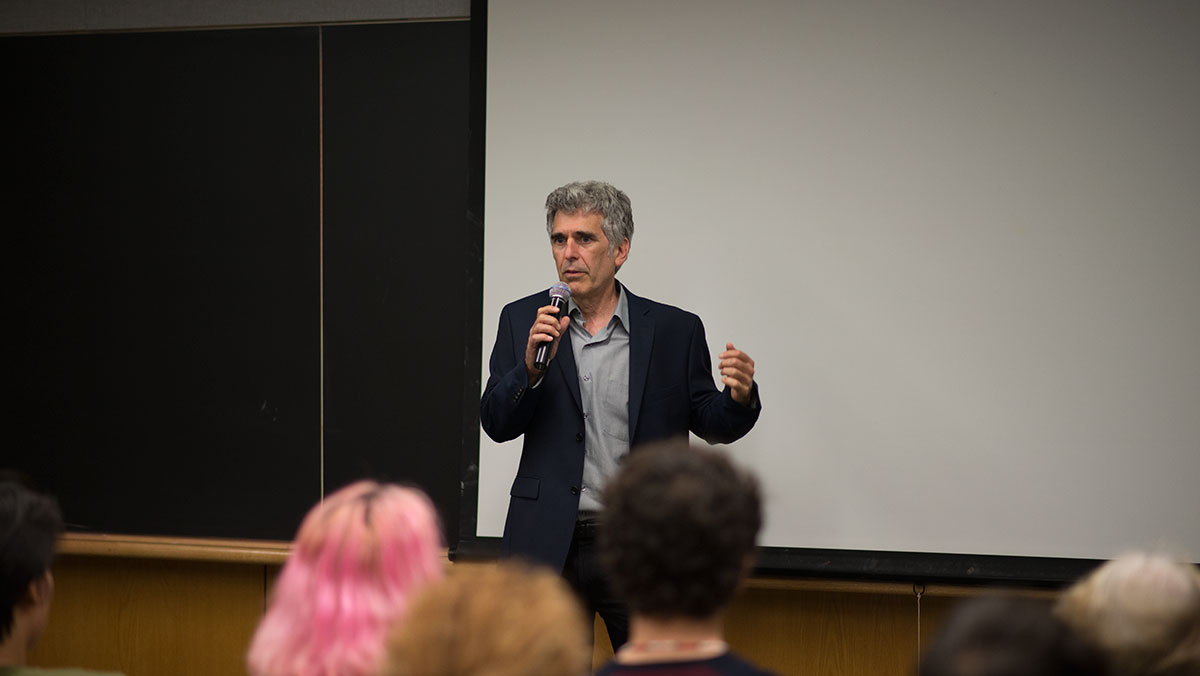 TOMMY BATTISTELLI/THE ITHACAN
Norman Solomon is an author, journalist and activist and an associate of Fairness and Accuracy in Reporting, a media watch group. He presented and engaged in a Q&A at Ithaca College on Sept. 10.
By Daniel Hart — Contributing Writer
Published: September 16, 2015

Norman Solomon, author, journalist and whistleblower advocate, spoke informally with a crowd about his work as a journalist advocating for whistleblowers in the United States government and military, as well the importance of whistleblowers in a free society. After an introduction by Jeff Cohen, director of the Park Center for Independent Media, and a trailer of the movie based off of his most recent book, “War Made Easy: How Presidents & Pundits Keep Spinning Us to Death,” Solomon spoke to the crowd about not only the role of whistleblowers in providing checks and balances for the government, but also the role of journalists to help advocate for these people who are willing to risk their careers in order to add glimpses of transparency to secrets that may exist. Solomon said striving toward transparency in the U.S. is a difficult yet necessary goal because the most sound government strategy is to treat its citizens like one would grow mushrooms: to keep them in the dark and to feed them manure.

Contributing Writer Daniel Hart spoke with Solomon about his experiences, responsibilities and philosophies as a journalist and whistleblower advocate.

Norman Solomon: Journalists working for news organizations that are hostile to my position, even in the case of Fox? Often in the case of Fox I’ve done live interviews usually by remote satellite hookup. It was most frequent for me after I got back from Iraq in late 2002 in an effort to prevent a U.S. invasion and to build citizen diplomacy communication. I think being clear on my goals, which were to communicate with people watching rather than persuading the interviewer, which is probably impossible — that’s been helpful. Also — and it’s tough sometimes — to not lose my temper. Because part of the technique is to guide the person being interviewed into flying off the handle. I have not been interviewed on TV … but I was interviewed by [Bill O’Reilly] on his radio program, and as he’s fond of doing, he eventually just cut off my mic, in the form of hung up on me because he didn’t like what I was saying. So it’s real limitations. I think it’s psychologically important when we’re facing criticism and even hostility from interviewers to try to prioritize our goals. In my case it’s to, as best I can, present a clear perspective. Easier said than done. It’s definitely a challenge.

DH: If the journalists want to aid whistleblowers and provide checks and balances for the government, do you think feature news or opinion news is more useful in doing so?

NS: I think that there are different avenues that can be very helpful in enhancing public understanding as well as getting information out to people. A lot of that is a journalist’s strengths and particular talents. Some people like to do investigative reporting and everything’s attributed and the opinion will come from others, although the assemblage of facts will hopefully give a picture of what’s providing some clarity. Other people just stray toward opinion. So I think that a healthy ecology, a healthy media environment would have people illuminating the value of whistleblowers through opinion as well as through investigative reporting.

NS: Doing thorough research and viewing the official story as part of the whole picture, not the whole picture. Digging for a range of sources is really crucial because with monochromatic sources you can get a monochromatic story. So digging around and asking sources, “Who do you think would be a good source?” and getting different perspectives and then comparing assertions and fact as well as opinion, and contrasting them.

DH: Since the era of the Vietnam War, how has media with a progressive agenda evolved?

NS: In general, media with a progressive perspective is higher quality now, with less rhetoric and more clarity. Of course I’m generalizing, but I think compared to 45 years ago, so 1970–2015, there’s more journalistic quality that is woven into progressive advocacy in journalism. I think that in part because back in 1970 there were not that many professional journalists with the training that were out doing progressive reporting validly and intentionally. Now, for one reason, journalists are out of work. And a lot of them are ironically liberated by being laid off or finding that they have to create new possibilities, new websites, reinventing their own careers. I think that can be very positive.