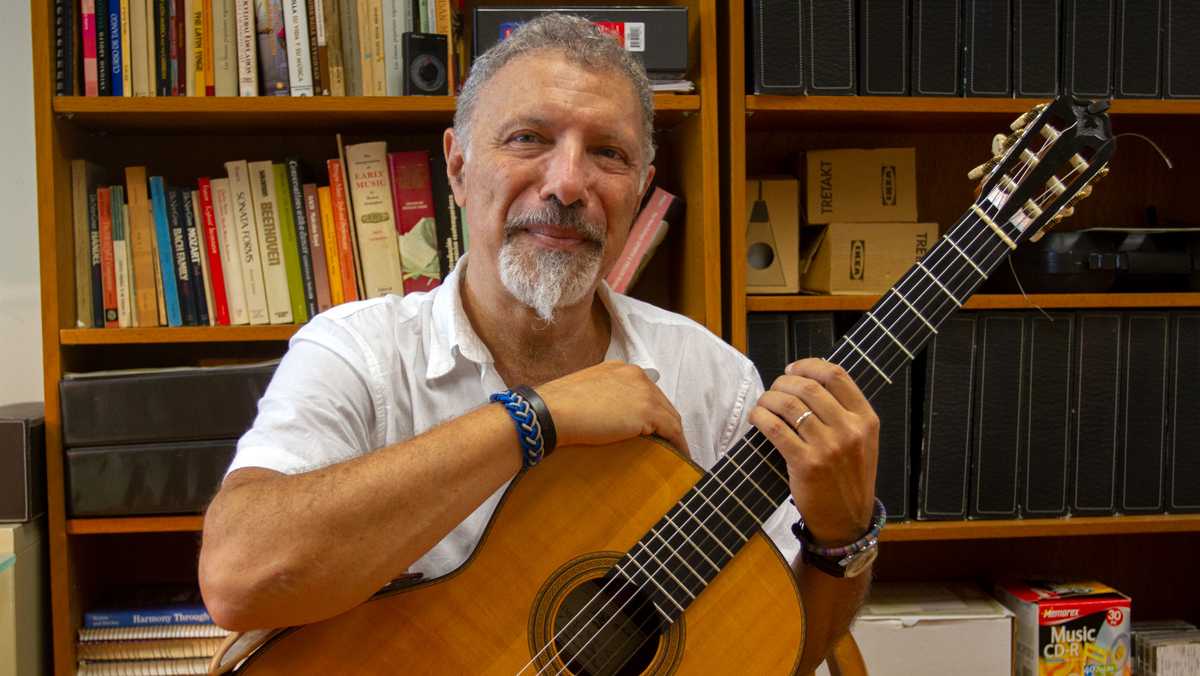 The Global Music Awards is an international music competition known for awarding and giving legitimacy to talented, independent artists, hundreds of which apply to its competition each year.

For the Spring 2018 awards, an Ithaca College professor won the gold medal for Best Instrumentalist and Best Album. Pablo Cohen, associate professor in the Department of Performance Studies, submitted his album, “La Casa”, to the competition in early spring. The album is comprised of Brazilian and Argentine music transcribed by Cohen and performed on the guitar and includes the first recorded pieces originally composed by Carlos Guastavino and Horacio Salgán.

Opinion Editor Meredith Burke spoke with Cohen about his inspiration for the album, his transcribing process and his overall experience compiling the album.

Meredith Burke: What type of music is featured on this album?

Pablo Cohen: It’s not popular music, but it’s based and inspired in popular music itself in Brazil and Argentina — that’s the trademark of what I do. It’s particularly significant [that] … the name of the album is ‘La Casa,’ which means the home. It has to do with my family, which is my center of gravity in many ways. My wife is from Brazil, and I’m from Argentina originally, and somehow the connection of the two cultures really brought me to bear the music.

MB: Is the music completely instrumental?

PC: Yes, it’s for solo guitar. It’s originally piano music … from the rural side of Argentina or the tango — the urban side of Argentina — or certain [pieces or] topics from Brazil. … Let’s say 90 percent of the album are those piano scores that I transcribed into the guitar.

MB: Could you tell me more about your process? How long did it take you to put the album together?

PC: I did not write the music or compose it, but I transcribed it. I put it into another medium. … You need to find the right keys. You need to find the right way of putting it together so that it sounds idiomatic for this new medium. That process took a while, because first, it was me loving the music and loving the composers. And I took a long time pondering on how I am going to do this and dreaming about it. … Through the help of my students who were good at inserting data into software … I was able to use trial and error to put together a lot of scores to try. … It took a few years, then it took me some time to learn it. Then to record it took a few months.

MB: What year did the project start?

PC: I did the process of finishing the recording … in 2013. … I didn’t decide to put it out there for a long time because I was at a period of contemplating things and thinking, concentrating on my teaching. … I owe [publishing the album], in great extent, to my wife helping me, and my kids telling me they loved the way it sounded.

MB: Is there anyone else who helped you with your process?

PC: The sound recording technology personnel. The teachers of recording technology — their names are Michael Caporizzo, Alex Perialas and Brian Dozoretz — they were amazing. It took a while for me to find the right room — I was very particular about that — and the mics, and they advised the placement. [They] even lended here and there equipment and things to really, really help me out.

MB: Did you work on other albums before?

PC: Yes, I did record with a couple orchestras before, and I recorded with colleagues. … But this album for me was the ‘do or die’ kind of thing. It’s not a coincidence that it was a solo guitar album. … It’s a reflection of, philosophically, what I feel in so many ways. Because on one hand, there’s the idea … in classical music, which is ‘let’s play the same symphonies and sonatas.’ … In my case, [the album] reflects the opposite, which is to bring new repertoire — project through the content, not necessarily project myself as to how much better I can play the same piece than the previous guy. … [It’s] kind of like the Winter Olympics — everyone has to do the same thing just to see who can do it a little taller or a little more perfect. … What about bringing to the people who listen music that touches their heart today, or something that you believe will touch your heart?

MB: How did it feel to win the award?

PC: It was really weird, because the same way you have people like me, who might be a little well-known in their field or their community, and there are others who are wildly popular who get this award. … This competition is geared up to independent productions — not necessarily SONY or Warner Bros., or whatever — but any artist who deals in an independent way. … It has hundreds of applicants from around the world, and there’s only nine gold medals — there are hundreds of silver, bronze and so on. So I’m extremely happy and proud, and I will always treasure this.

MB: Why do you think it’s important that we celebrate this music?

PC: On one hand, to bring an audience things that are newer and haven’t been here before — not to bore them with the same stuff all the time. … This is a deep, artistic thing, not a sport. … I want to teach my students that there is a way out there to be unique, to have your own voice — and that may get you farther than singing the same song, but just a little bit louder.