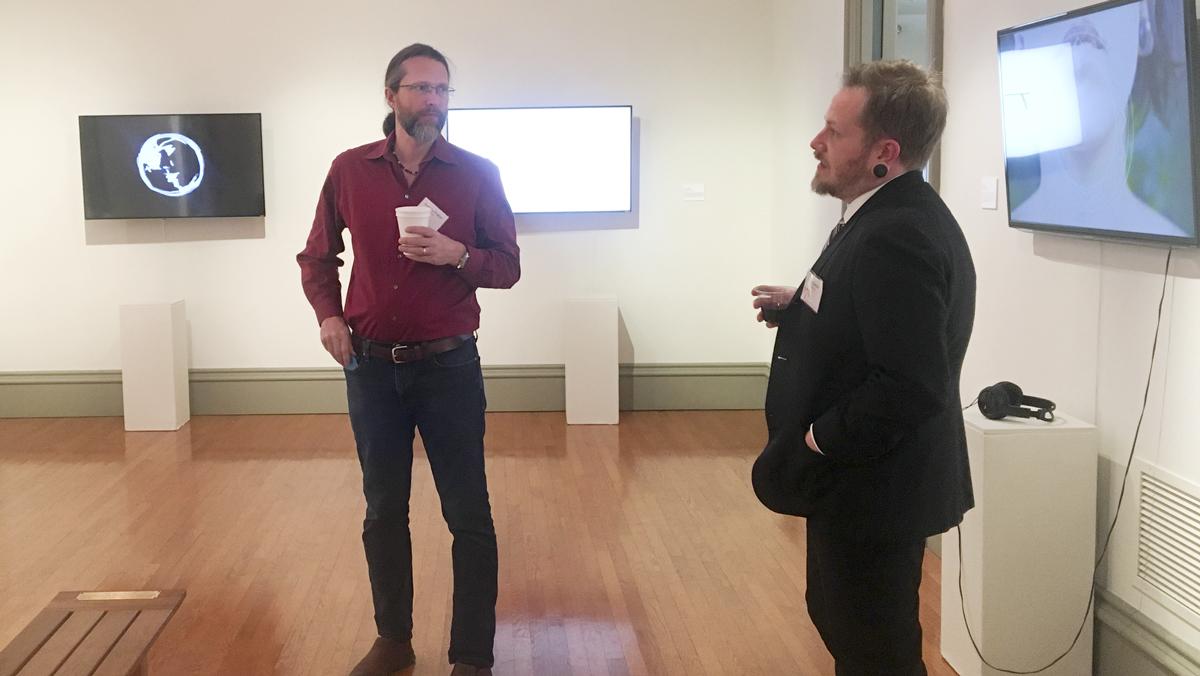 Symbolism has always been a major device in any field of art — whether it be literary, visual or so on. However, as mediums of art and our culture change, symbolism as a device has undergone changes as well.

Recently, two Ithaca College professors showcased their work that takes traditional symbolism and, utilizing animation and other art forms, uses it to explore human narratives and archetypes. Jason Harrington and Brad Lewter, associate and assistant professors in the Department of Media Arts, Sciences and Studies, recently opened an joint exhibition of their art as part of the Urban Arts Crawl in Corning, New York. The exhibition, “Symbol/Symmetry,” contains multiple pieces of animation, interactive works and paintings by both professors that contain the themes of symbolism and iconography. The exhibition opened in 171 Cedar Arts Center’s Houghton Gallery on Jan. 25, and the work will remain there until Feb. 15.

Opinion Editor Meredith Burke spoke with Harrington about his decision to do the exhibition, the type of art it contains and the impact he hopes it will have on his audience.

Meredith Burke: How did the decision to have the exhibition come to be?

Jason Harrington: The gallery gave [Lewter] an offer, and he suggested we do the show with me as well. … So then I submitted my work, and the gallery liked my work as well, so then they offered both of us the show.

MB: What type of work is being shown there? Do your pieces and Lewter’s pieces share any similarities?

JH: We both work with multimedia, and we both are animators, and we both work with themes of symbolism and iconography. So it was sort of the perfect fit. … [Lewter] had some interactive computer graphic animation and 3D animation in the piece, and I had my 2D animation in the piece. Both of us had installations — so he had an interactive piece, and I had an installation piece consisting of a desk with a picture frame … where the film shows as if it were a painting sitting on the desk.

MB: You mentioned your works contain symbolism and iconography — what kinds? What sort of messages do your pieces have?

JH: We’re both sort of recontextualizing traditional symbols from a range of mythology and religious symbols. … A lot of my works are retellings of myths in a new, modern context, and also with a news style of animation. … My own style of animation is a sort of fine–arts animation, borrowing from painting traditions where you see this kind of iconography and making it move. … One of my pieces in the exhibition is called “Breathing In,” and … it deals with a combination of different origin stories. Another one of my films … is basically ever–changing symbols happening within a circle. Sometimes it’s very flat, but all of a sudden, those symbols morph and … you can see images appearing that aren’t symbols in the sort of splattery ink–drawing style. … That’s one of the pieces, called “Incarnations,” in the show.

MB: What was your process in making the pieces displayed in the show? How long did each piece take?

JH: There’s a lot of work in the show, and it represents a 10-year span of work that I’ve made. The three animated pieces each took about three years to make. “Breathing In” includes a new addition to that installation — I added to it with a handmade book, a leather-bound book of sketches and studies I did for the film. … It’s a five–minute film, but it took so long to paint all those frames for the animation. … I wanted it to feel very personal, like you were looking at something on your own desk — a reminiscing kind of experience.

MB: What impact do you hope the show, or your art in general, will have on people?

JH: I want my work to provoke thoughts about embedded meanings in symbols and how we read the world around us. … I think one thing that my work doesn’t do is that it doesn’t hit you over the head with what it’s about. You have to look in closely. And for me, that’s what I love about art — I love art that requires you to sort of think a little further and look a little closer.

MB: Are there any ways you plan to implement your work from the exhibition into your teaching at Ithaca College?

JH: Every piece that I make, I’m always learning. I’m always challenging myself, and, of course, that comes back to the classroom. Being an artist is like a living thing — you’re always changing. You’re always growing. And I think being a professor has to be the same way. You can’t just teach the same thing over and over again and have it be alive. I think if the subject you teach is alive for you because it’s part of who you are as an artist, then it’s going to be alive for your students, and I think that’s what my students get out of it.