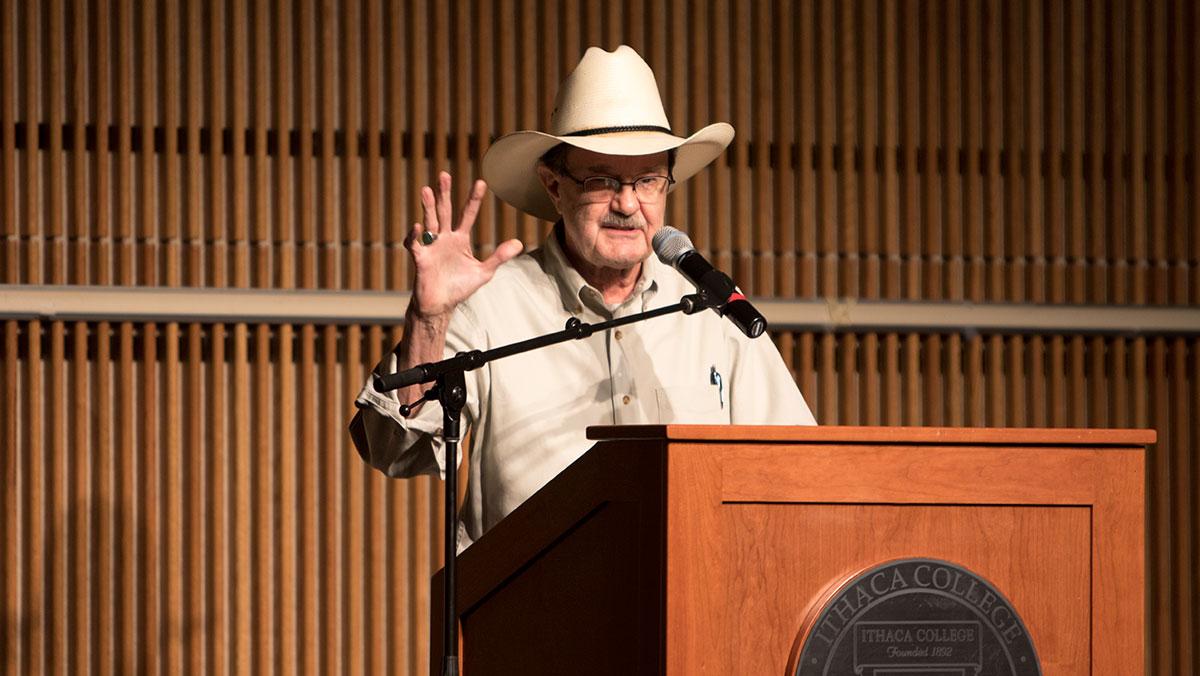 Progressive commentator Jim Hightower presented “Against the Current: How Indy Media & Activists Can Challenge Corporate Control” on Sept. 24. Upon entering, audience members, made up of mostly Ithaca community members, received a copy of the Hightower Lowdown, a monthly newsletter published by Hightower.

Jeff Cohen, director of the Park Center for Independent Media, introduced Hightower, who spoke to his audience about his experience with independent media, corporate influence and politics. After speaking, audience members had the chance to ask Hightower questions and purchase a copy of his latest book.

Jim Hightower: The turnout is dependent on turn-on and reach-out, and the Democratic Party has not been doing that for the last 30 or 40 years. And it has now begun to come back with, for one, Bernie Sanders, and campaigns like that that have been building across the country, resulting in some good local and state officials here and there that are changing policies, and that’s when people begin to vote again. It’s if they see that somebody that they vote for [will] actually do something that matters to them and helps them. So that’s where we are in building that process. We have to have Elizabeth Warren, Bernie Sanders, voices like that, people that are speaking directly to people to make them say, “Well all right, I’m hearing myself in this message, and this is worth fighting for. You’re saying that my kid is going to get to go to school without bankrupting me? Are you saying that it’s not just about jobs, but wages?” You know, Rick Perry, the fact that he created 1 1/2 million jobs while [he] was governor, well, you could ask a waitress in a bar or cafe and say, “Do you know Perry created 1 1/2 million jobs?” and she says, “Yeah, I know. I got three of ‘em.” So that’s the kind of language that we have to use again. Talking directly to people about their interest in very progressive terms that build America, not take back America. The tea party is taking us back to the robber barons. Move America forward with everybody moving forward, and if we talk that kind of language, you’re going to have people voting again and you have to build trust.

JH: You don’t? Donnie Trump admitted he gave money to all these candidates, and then he called them, and they do what he wants. I don’t think that’s entirely true, but pretty close. And that’s the importance of having somebody there like Bernie. He made his first $15 million in his last report, and his average contribution was $31.20. You can’t buy a president for $31.20, but you can buy a president who will not be bought for $31.20.

EP: How has social media and the Internet changed the grassroots movement?

JH: It’s just more communication in an instant, and that can be stupid, you know, but you not only reach the people you’re trying to — you reach many more, maybe in Australia or something and so it links you to a larger world. The Internet is an organizing tool and you get more feedback.

EP: Is the ability to use social media to reach people quickly a benefit or a harm?

JH: It’s always helpful to realize what you’re doing. But yeah, it’s a positive. There’s so much more good that comes out of it than just stupidity, but there’ll be a lot of stupidity and a lot of nasty comments back and forth, but you can screen that out. It’s just an amazingly powerful tool to be able to reach so many people. You know, it takes a long time to write a book, a good while to do the commentaries, and they do reach a lot of people, but that same commentary, we put it up on the Internet and so they go everywhere, and then they get picked up by others. It’s a rippling technology that we didn’t have before. It began in America with pamphlets put on a town board, and we’ve advanced a little bit.