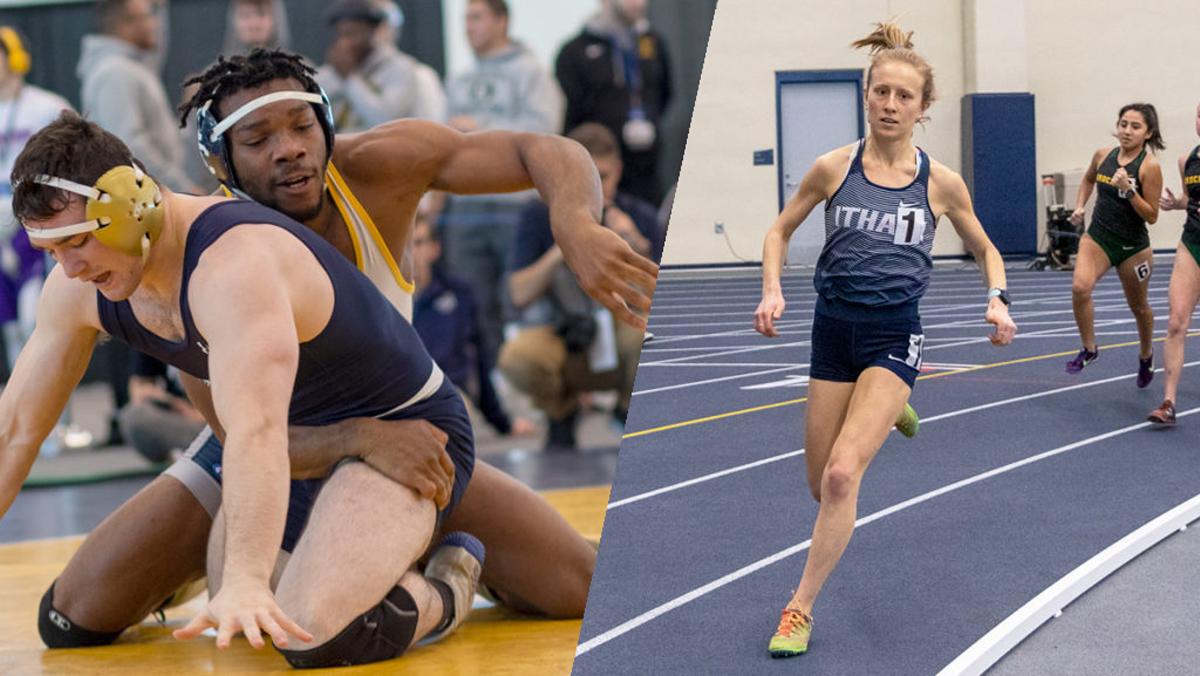 After finally qualifying for her first national championship her senior year, Ithaca College student-athlete Maggie Nickerson ’20 did not quite get the ending she expected. She was a member of the No. 1–seeded distance medley relay team when the NCAA Division III Indoor Track and Field Championships, scheduled for March 13–14, were canceled because of the coronavirus pandemic.

However, Nickerson still finished the season with her first–ever All-American honor as the United States Track and Field and Cross Country Coaches Association (USTFCCCA) awarded all athletes and relay teams that qualified for the national championship All-American status.

Nickerson said that while nothing could come close to competing at nationals, she is satisfied with the USTFCCCA’s decision to honor every athlete that qualified for the event.

“I don’t think anything could make up for the loss,” Nickerson said. “They’re acknowledging it, so it helps a little bit in getting over it, and it contributes a little bit to some closure.”

Jennifer Potter, women’s track and field head coach, said the USTFCCCA was also considering giving All-American honors to the top eight seeds for every event, as well as giving honors for the top eight on the initial performance list. Potter said she was in favor of any of the options as long as her student-athletes were recognized for their hard work throughout the season.

“I don’t think this has any precedence, so I’m glad that these men and women that qualified for the national championship left with something,” she said.

The College Swimming and Diving Coaches Association of America followed suit with the USTFCCCA in that it granted every swimmer and relay team that qualified for the NCAA Championship All-American status.

Rising sophomore Eliana Wallock and rising seniors Justin Moczynski and Ava Lowell all earned their first career All-American nominations. All three divers qualified for the national championship on both the 1-meter and 3-meter boards. Moczynski was named the Liberty League Diver of the Year and placed second on the 3-meter and third on the 1-meter board at NCAA region 4 diving championships. Lowell won the Liberty League title on the 1-meter board and finished third on the 3-meter, while Wallock finished in fourth place in both events at the conference championship as a freshman.

The NCGA usually would name the top eight medal winners at the NCGA National Championships to the All-American team, but it was unable to do that once the meet was canceled. The association then decided to grant the four gymnasts with the highest season average score composites for every event in both the East and West regions, which means 40 gymnasts earned spots on the All-American team. Four Bombers earned honors in the East region, including rising sophomore Cameryn Nichols, who was named All-American in the vault, floor exercise and all-around events. Cassidy Marquette ’20 was also honored in vault, along with rising senior Katie Holcomb in the balance beam. Rising senior Courtney Christoforo earned her second All-American honor in the uneven bars after placing first in the event at the 2019 NCGA National Championships.

Cassidy O’Malley ’20 became the seventh All-American women’s basketball player in the college’s history after being named to the Women’s Basketball Coaches Association Division III Coaches’ All–America honorable mentions list. She was also named to the All-Liberty League and D3hoops.com All-East Region teams. Because All-American nominations are based on individual season statistics, the cancellation of the NCAA Division III championships did not affect the All-American selection.

The National Wrestling Coaches Association (NWCA) named its All-Americans based on the rankings the wrestlers held going into the national championship. The top eight seeds were given First-Team honors, with the remaining ranked athletes being assigned Second-Team and Third-Team honors.

Wrestling head coach Marty Nichols said that while the circumstances of a canceled meet are unprecedented, he is satisfied with his team for having so many wrestlers qualify for nationals.

“If you don’t ever get there, you don’t have a chance and you have to give credit,” Nichols said. “They were there and they did their job, and that’s all they could do.”

Rising junior Logan Ninos, who was named a Second-Team All-American in the 125-pound weight class, said that while he understands the NWCA’s decision, there are also negative aspects of the decision.

“It’s cool, but at the same time, I call it a fake All-American,” Ninos said. “My name will be in the Ithaca room forever, but I feel like I didn’t earn it. Not that I have a huge problem with it, but it doesn’t sit well with me at times.”

Ninos, who was a first-time national qualifier, said that being a Second-Team All-American will motivate him for next season.

Rising junior Dom Mikula, a two-time All-American pole vaulter on the men’s track and field team, said he thinks the track teams are going to come back and be ready for next season.

“I think everyone’s hungry, and I don’t think it’s just me as an individual,” Mikula said. “Especially those people at nationals who didn’t get to compete, they want to bring the same competitiveness. Obviously, everyone learned that you can’t take anything for granted. So every time you’re on the track, they’re going to compete.”