Rachael Geary/The Ithacan
Senior Carolyn Nichols has been participating in gymnastics since she was three years old. Now in her final season, she hopes to go out strong.
By Anna Harris — Staff Writer
Published: February 28, 2019

When senior gymnast Carolyn Nichols stepped onto the spring floor for her first meet of the season against Rhode Island College, she had only one thought on her mind: returning to the National Collegiate Gymnastics Association (NCGA) National Championship Individual Event Finals for the third year in a row and chasing another pair of All-American titles.

Nichols has been chasing success in gymnastics for the majority of her life. She said her passion for gymnastics started around the age of three after she attended a gymnastics-themed birthday party.

“After that, I just never stopped flipping and just like doing dangerous things around the house,” Nichols said.

Nichols has been one of the most successful athletes in the history of Ithaca College’s gymnastics program. She has made two trips to the NGCA event finals during the past three seasons and has earned two All-American finishes: one on vault and one on floor exercise. She also holds the program record on floor exercise.

After her initial introduction to the sport, Nichols continued to dedicate herself more and more to gymnastics. Nichols grew up in southern New Hampshire, where competitive gymnastics is not a very popular sport. In order to improve and face stronger competition, Nichols regularly traveled nearly an hour to Boston to compete in the Massachusetts–region of USA Gymnastics (USAG).

In high school, Nichols was a part of her high school’s team, and she finished first in the all-around competition with a score of 36.60 at the New Hampshire Interscholastic Athletic Association Gymnastics State Championship. Nichols was also a member of the Absolute Gymnastics Academy club team in Tyngsborough, Massachusetts. Nichols ran track as well, competing at the New Balance Indoor Nationals in 2014 as a part of her school’s sprint medley relay. However, she ultimately gave it up to focus on gymnastics.

Nichols was recruited by the gymnastics program at the college; however, it was not what initially drew Nichols to the institution. Nichols is a part of the six-year doctorate of physical therapy (DPT) program that the college offers, which allows students to earn their bachelor’s degree and DPT all at once.

“[Physical therapy] was the reason I chose Ithaca,” Nichols said. “Gymnastics was an added bonus.”

Though it wasn’t her main reason for coming to the college, gymnastics has become a huge part of her college experience. Nichols has been both a starter and standout performer for the Bombers since her first season in 2016. Appearing in four different meets her freshman year, Nichols averaged a 9.438 on vault, a score which was the third-best vault average on the team. She also saw action as the team’s beam anchor, scoring an 8.050 against Southern Connecticut State University.

The 2017 season was when Nichols’ college gymnastics career erupted. Nichols appeared in all 11 meets, averaging a 9.4182 on vault and a 9.3150 on floor. At the Temple University Invite on March 12, Nichols scored a 9.700 on vault to qualify for the NCGA event finals. There, she earned All-American honors after tying for third place with a score of 9.650.

In her freshman season, Nichols’ vault was originally just one front handspring to a front tuck dismount. The second front handspring was added by Suddaby during the offseason before her sophomore year as a way to upgrade the previous vault.

“It was a big pain in the butt to learn, and eventually I got it figured out and completed it very well freshman year,” Nichols said. “During the postseason workouts, Rick came up to me with the idea. It ended up working really well, and I had a really easy time with it, relative to learning a new skill and it’s fun.”

According to Suddaby, no one had ever performed the routine before in competitive gymnastics, so the skill had to be given a difficulty value by USAG for scoring purposes before Nichols could perform it. Nichols’ now-signature vault made waves within the gymnastics community when she first debuted it.

“It was really cool because you could tell that other players and coaches were watching my vaults,” Nichols said. “Every time I saluted for the vault, people would stop and be like, ‘Oh, that girl from Ithaca is going.’”

In her junior season, Nichols appeared in all 11 of the Bombers’ meets. Nichols set the school record for vault at 9.800 March 3 against SUNY Cortland and matched the score two more times later in the season. She also posted a regional qualifying–average score of 9.725 on floor to make the NCGA event finals once again.

At the event finals she earned a personal-best score of 9.850 on floor to finish tied for third place, the same position where she finished on vault in 2017. She earned her first All-American title in the event and second of her career. 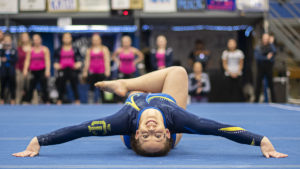 Senior Carolyn Nichols placed third at the NCGA event finals in 2018 on floor exercise. She hopes to earn another All-American finish on the event this season.

“Being a two-time All-American is just crazy,” Nichols said. “To have my name up on the website and be associated with that type of legacy, I just don’t really know how to describe it.”

Suddaby said he believes that Nichols’ motivation and work ethic extend beyond her career as an outstanding gymnast.

“She is just a quality person, and she looks at doing quality work whether it’s her gymnastics, her academics or whatever,” Suddaby said. “She’s going to step up, and she’s going to do quality things, and she does them in a quality manner.”

Nichols said Suddaby’s coaching style is one of her favorite parts of being on the college’s team. She said Suddaby focuses on what each individual gymnast needs to get better rather than putting strict parameters on what they need to do each practice.

“One of the biggest benefits I got from Rick is just learning what I need and adjusting my practice to my personal needs,” Nichols said. “What I need to do to be successful isn’t necessarily what my teammate needs to be successful; our training is very focused.”

Nichols and her teammates also have fun with Suddaby outside of the gym. She said that she and a few of her teammates once stole the couch out of Suddaby’s office and have also hung his desk chair from the ceiling of the gym.

“We can all make jokes with him, and he can pop back at us,” Nichols said. “We have a really good relationship with Rick, and I think we have a lot of fun that other sports may not have.”

Looking to the future, Suddaby said that losing seniors like Nichols is definitely going to impact the team.

“I don’t know how to be as good next year as we are this year because we’re losing her and another All-American,” Suddaby said. “We’re losing kids right now that are top ranked in the country. It’s a tough class to lose.”

Over the course of her collegiate career, Nichols said that she has been lucky to escape the serious injuries that often plague gymnasts, but that two decades of gymnastics has still worn her down with persistent aches and pains. While her body might be ready to retire from gymnastics, Nichols said she does not feel prepared to leave the sport she loves.

“I’m not ready to leave my friends, and I’m not ready to not be in the gym every day anymore,” Nichols said. “It’s going to be weird though — 20 years of doing a sport, and then suddenly you don’t do it anymore.”

Sophomore Lauren Hansen competes in the vault and floor exercises with Nichols. Hansen said Nichols exemplifies how to be a teammate.

“Carolyn is a very supportive teammate who is always there to help out when needed, both inside and outside of the gym,” Hansen said. “She is someone who isn’t in the sport to do well for herself, but she wants her whole team to be successful.”

Hansen also said she has learned how to be a better gymnast through observing Nichols.

“She is really good at going into meets with a clear head and getting her job done,” Hansen said. “She never seems anxious or nervous and showing that to the team really helps in competitions, especially for the underclassman that have less experience in the college gymnastics environment.”

As for the rest of this year, Nichols’ goal is to add another All-American title on vault as well as floor at the NCGA event finals at the season’s end. She is currently averaging 9.515 on vault, with a season-high performance of 9.700 against Springfield College on Feb. 17. She also has an average of 9.625 on floor and a season–high of 9.750 from the Rumble and Tumble Meet on Feb. 13.

“I want to keep improving my routines, which is ultimately going to help the team’s scores,” Nichols said. “But I’d like to get a couple more All-American titles in there; that’s a big goal that I really want to achieve.”