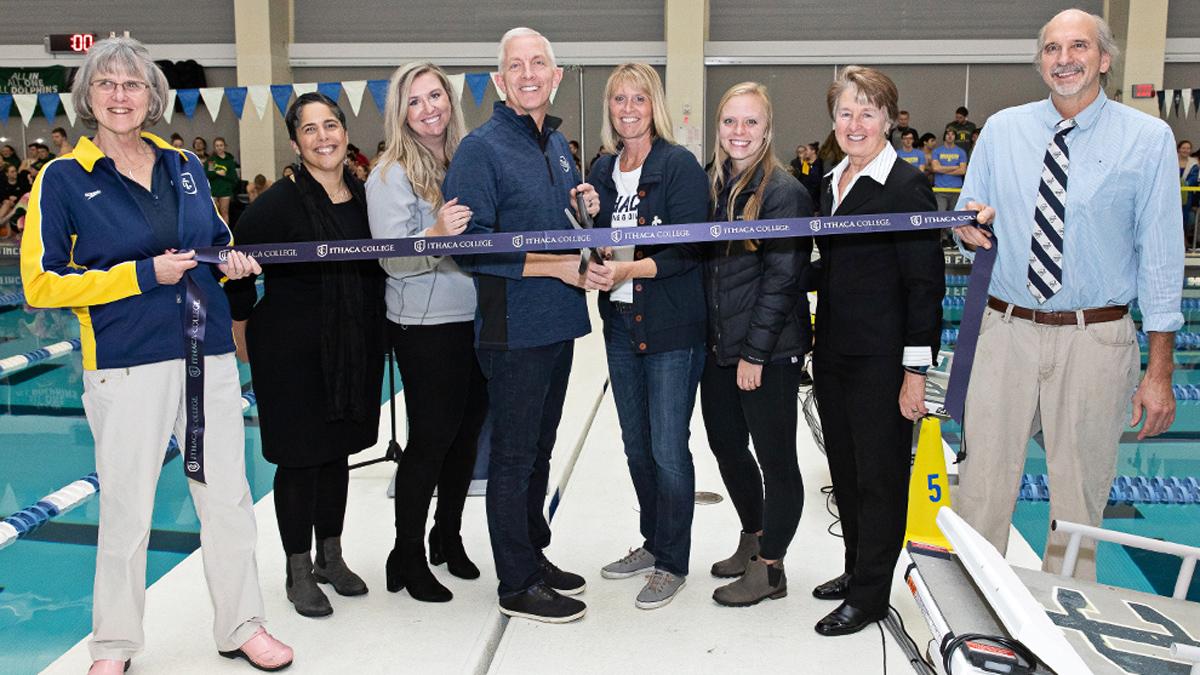 COURTESY OF ITHACA ATHLETICS
The Athletics and Events Center Aquatics Pavilion was renamed as the Kelsey Partridge Bird Natatorium on Dec. 1 as a result of an endowment from Lee '86 and Linda '86 Bird.
By Jack Murray — Assistant Sports Editor
Published: December 12, 2018

A swimming facility up to the standards of the Athletics and Events Center Aquatics Pavilion will typically run up a large bill in maintenance costs. This is no longer a worry for Ithaca College because it recently received an alumni endowment that ensures operational costs will be covered for generations.

Lee ’86 and Linda ’86 Bird gave the endowment to the college in dedication to their daughter, Kelsey Partridge Bird, who died in infancy. They previously donated a warming pool, known as Kelsey’s Pool, to the college in 2009, but this donation will change the name of the Aquatics Pavilion to the Kelsey Partridge Bird Natatorium. The Bird family did not want to disclose the amount of money they donated, but the funds will be used to support maintenance and equipment replacement for most technical aspects of the pool.

“I love the swimming program,” Lee Bird said. “I have stayed close to it because of my experience with Paula and Kevin, and I want people to have the same experiences I had.”

Bird was a finance major and an All-American swimmer at the college. He served on the Athletics and Events Center National Committee during the development of the facility. Linda was a human resources major and was involved with student government and planned activities on campus. They wanted to share their daughter’s memory with the community that treated them so well during their college years, and they felt the endowment was the best way to do so.

“We’ve been really blessed as a family financially through my career,” Bird said. “The Lord’s been really good to us, but unfortunately one of our daughters passed away as a newborn. We didn’t get a whole life with her, so we wanted to give back to the community in a way that we can also remember her.”

The facility is not only home to the men’s and women’s swimming and diving teams, but also the men’s and women’s track and field teams, the club swim team, various classes offered by the college and open hours for students, faculty and the community. In addition to day-to-day usage, the natatorium hosts the Liberty League Championships and the New York State Public High School Athletic Association Championships for girls swimming and diving.

Susan Bassett, associate vice president and director of the Department of Intercollegiate Athletics and Recreational Sports at the college, said the already established donating relationship with the family led the endowment to become a reality.

“Lee and Linda Bird have been engaged with the college for a while,” Bassett said. “We continue to have discussions with alumni about what their interests in supporting Ithaca might be. Through our discussions, we talked with them about possibly supporting the pool with an endowment and, over a period of time and a few conversations, it really resonated with them because of Lee’s involvement with the sport of swimming.”

Bassett said the endowment will be used for a maintenance fund that will keep the pool in peak condition every year. She said the facility has a technical timing system as well as electronics with touchpads, relay judging platforms, a full–color board for swimming, diving and water polo and a different display board for diving. These resources need to be evaluated and kept up to date every season. The pool also has a movable floor, which is used for instruction and physical therapy. The endowment will cover the costs of keeping this equipment in first-class shape. Bassett said the endowment will cover the fees for all of these operations and all other pool maintenance.

“It’s going to create a funding source so that we can maintain these highly technical aspects of the facility really well,” Bassett said. “One of the things that appealed to Lee and Linda is that it’s not just about Ithaca College men’s and women’s swimming and diving; it’s about our multiple academic programs that use our aquatics facility and also our community groups.”

Markwardt coached Bird when he swam at the college and said Bird was a focused swimmer who was a lot of fun to work with.

“He always went the extra step,” Markwardt said. “He worked really hard. He was always involved with things on campus. He really was great; everyone on the team really liked him and enjoyed him.”

Miller was also at the college when Lee was on the team. She said that he was her office assistant in 1984 when she first started at the college and that both coaches have remained close to the family, even attending their wedding. She said this endowment specifically will allow the facility to flourish for years to come.

“It means everything to the program, but also to the school itself, to be able to maintain this facility and make it look beautiful,” Miller said. “Because of the Birds’ generosity, we will be able to keep it like this.”

Sophomore diver Justin Moczynski said the endowment gives him motivation do his best for the college and to continue the legacy that the Birds have provided a foundation for.

“They put faith in us,” Moczynski said. “I feel not only obligated to give that back but to do better. I feel like we are definitely doing that, and this is just another opportunity, and it will set the tone for the future.”

“When I look at the Ithaca College swimming Instagram feed and it says the location, it will say at the Kelsey Partridge Bird Natatorium,” Bird said. “I get to see my daughter’s name in print, and it helps me remember her and helps our family, more or less, have a chance to get to know her.”