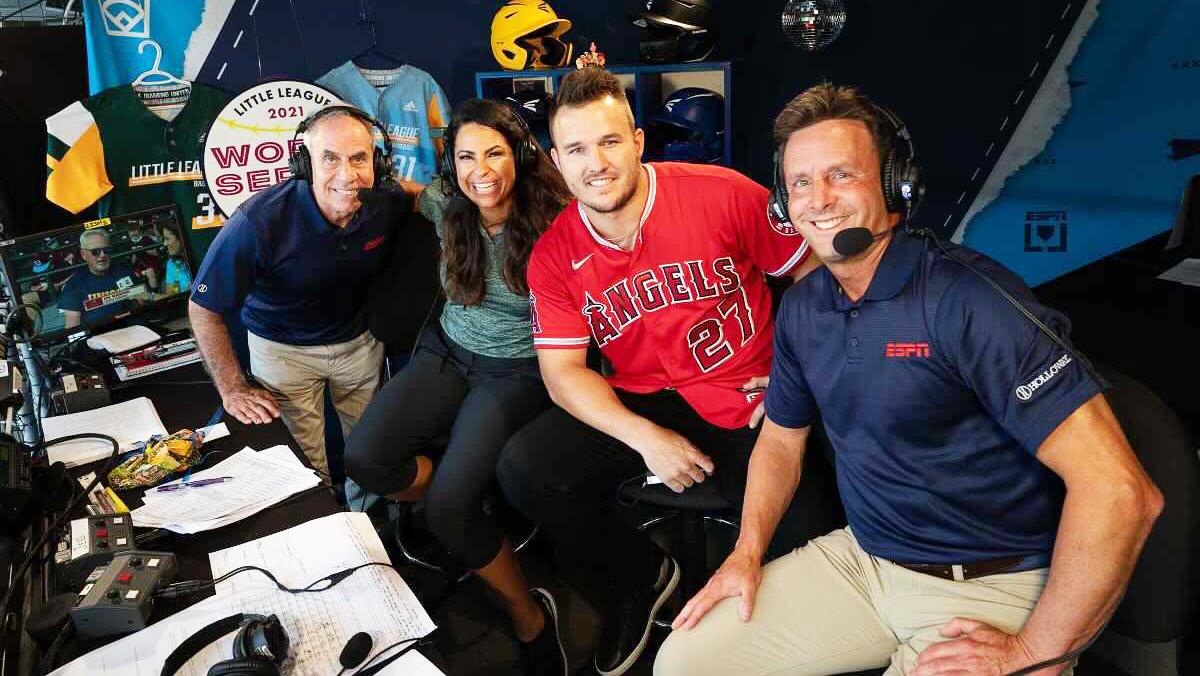 Courtesy of Karl Ravech
Ithaca College alumni Emily Adams '21 and Karl Ravech '87 covered the Little League World Series for USA Today and ESPN, respectively. Ravech has covered the event for the network since 2003, while it was Adams' first year.
By Connor Wood — Staff Writer
Published: September 2, 2021

Karl Ravech ’87, who works for ESPN, broadcasted the games for the network. Emily Adams ’21 had a summer internship with USA Today Sports and traveled to Williamsport to cover the event.

Adams, a recent graduate from the college, said this was the first live sports she covered in two years. Due to the cancellation of the Fall 2020 sports season and spectator restrictions during the Spring 2021 sports season as a result of the COVID-19 pandemic, Adams has not been able to cover live sports since 2019.

“It was such a cool experience, this being the first live sports I have covered since my sophomore year,” Adams said. “To be at the Little League World Series for the first time and to be covering it for a national outlet, having tons of eyes on my stories, it was a super cool experience.”

Ravech has been covering the Little League World Series since 2003 with ESPN. He said this event is much more than about the game of baseball.

“This is sort of like the Olympics for Little League baseball where you have all countries represented,” Ravech said. “We cover this event more so to tell the stories of the kids. This has always been about the kids and the parents, and those who have helped them grow up to where they stand today.”

Ravech has worked for ESPN since 1993, making appearances on SportsCenter and Baseball Tonight.

“I am lucky enough to do a lot in this industry but it is an honor to be here every year,” Ravech said. “It is so important to have fun with it and not get lost in the X’s and the O’s.”

This year, the Little League World Series did not include international teams and only invited teams from within the United States and spectators were not allowed.

Although this was Adams’ first time at the Little League World Series, she said the atmosphere in Williamsport still amazed her.

“I was blown away by how energetic everything still felt,” she said. “It was just fun watching the kids play, they’re so good … it was just cool to watch a bunch of 12 year olds who are more competent at sports than I’ve ever been at anything.”

Early in her stay at Williamsport, Adams had a story receive national recognition after she wrote about the lone female participating in the event, Ella Bruning, on Aug. 21. Bruning was the catcher for Texas in the tournament.

“I did one story after a game about her and it totally blew up,” Adams said. “The story has over 400,000 pageviews. I would google Little League World Series and that story would pop up because I am a 21 year old intern, so to have that kind of exposure was really wild.”

Since the Little League World Series started in 1947, only 20 girls have competed in the tournament.

While Adams said she enjoyed talking to all the kids and their families at the event, she said covering Bruning held extra importance to her.

“Being able to be a female reporter covering the only girl in the competition, that was meaningful for me,” Adams said.

Adams said she wrote 10 articles about the tournament and had fun covering the event. She said she enjoyed talking to the children, but noted that the answers she got from them were hit or miss. She said that she would like to cover the event again in the future.

Ellen Staurowsky, professor in the Department of Media Arts, Sciences and Studies at Ithaca College said that it would not surprise her if Adams found herself covering similarly prominent events.

“She has always been so passionate with everything she has done,” Staurowsky said. “She has been mature beyond her years professionally, and when we look at the work she has been doing, we see how what she did as a student here at Ithaca College is reflected in her work, day–in and day–out.”

Ravech said that he often reminisces sometimes on his time at Ithaca College. Speaking from his work and academic experience, Ravech said the best advice he can give to media students entering the professional world soon is to be ready to take on the unexpected.

“I would make sure you focus on being your best and not having any expectations,” Ravech said. “Enjoy the unexpected twists and turns and take chances outside of your comfort zone.”