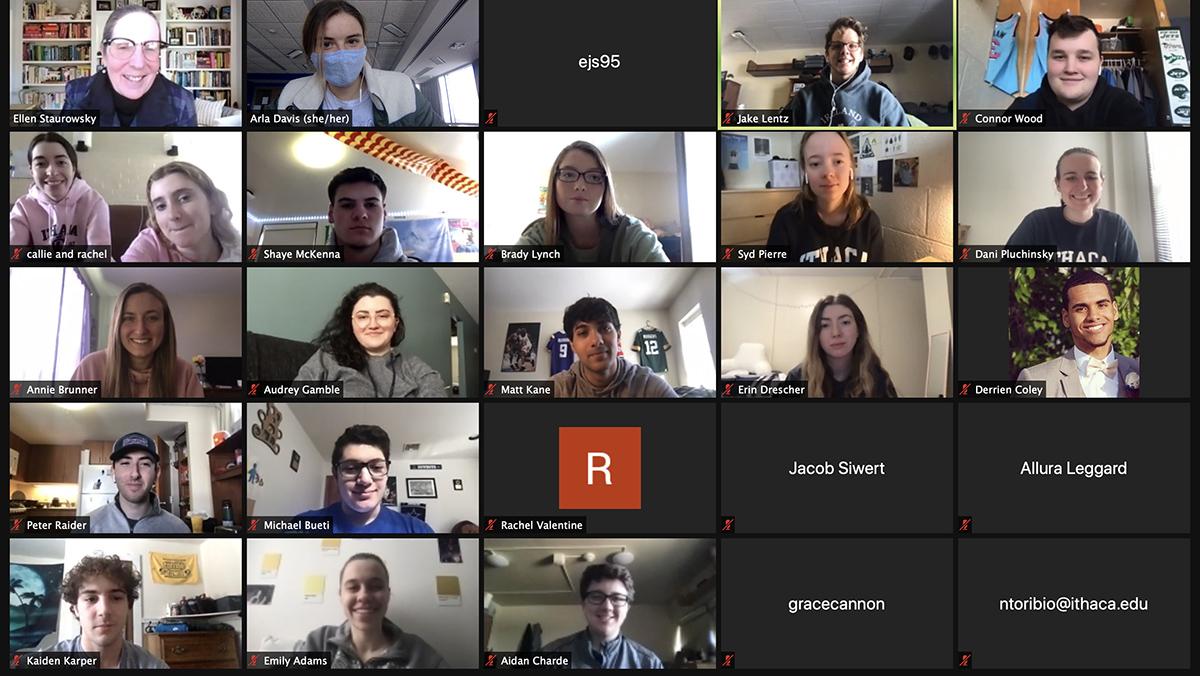 Courtesy of Ellen Staurowsky
Ellen Staurowsky, professor in the Department of Media Arts, Sciences and Studies, working with the Women’s Sport Media Incubator class on March 2. This is the first semester the class is being taught.
By Connor Glunt — Assistant sports editor
Published: March 3, 2021

The Park School of Communications introduced a new course this semester to highlight women in sports media.

The sports media program introduced the elective Women’s Sports Media Incubator, which is taught by Ellen Staurowsky, professor in the Department of Media Arts, Sciences and Studies. Staurowsky, who published the book “Women and Sport: Continuing a Journey of Liberation and Celebration” in 2016, was recently brought back as a professor at the college in 2020. The class is centered around a semester-long research project related to the history and current events of women in sport.

She was first approached about the opportunity by Mead Loop, professor in the Department of Journalism and sports media program director, to create this course after she returned to the college, but Staurowsky said she has had the idea for a long time.

“As soon as he offered that invitation, the tumbler in my head just clicked almost immediately,” Staurowsky said. “I really felt that it was a service to our students to engage them in this very live conversation, which is going on right now, that we needed to be graduating our students with a much more nuanced appreciation.”

That need for this course was centered around the findings of a Nielsen report from 2019, Staurowsky said. According to the study, the demand for more women in sports has recently increased.

“There’s a very conscious decision to bridge the gap between what corporations understand women’s sports as an asset versus what the actual value of women’s sports is,” Staurowsky said. “What’s beginning to happen is we’re beginning to see that gap closing more and more, resulting in more sponsors for women’s sports, more conversation around elevating the level of coverage, both in terms of percent and quality.”

Staurowsky said she wants her students to be able to refine their topics for the research project over the duration of the course. Students in the course have just begun the research process by choosing their teams and topics. Some of these topics include the sexualization of women in sport, the inclusion of transgender and LGBTQ athletes in sports media, the policing of women’s sports and the pay gap in women’s sport media. The goal is to eventually reach a conclusion of how to create change in the sports media industry.

“With this being the first time that we’ve done this, there is a little bit of flying by the seat of our pants, because we’re catching a wave right now,” Staurowsky said. “We’re making the path as we go along. I really am trying to build a relationship between industry and what we do so that we’re actually working on live projects for industry clients.”

Loop said he is optimistic about the course’s long–term outlook, as it filled quickly during registration.

“We know where the growth is in sports media,” Loop said. “It is women producing and consuming sports media. So this is the right direction for us to go because it represents the reality of the larger society.”

The course has 25 seats, and 14 of the students enrolled this semester are women. Staurowsky said it was the first and only class in the sports media major in which she has had more female students than male. Senior Allura Leggard said she was drawn to the class due to Staurowsky’s reputation and the course description.

“I saw Professor [Staurowsky’s] class, and I really loved the idea of women in sports because it is something that is such a topic that people don’t discuss, and if they do discuss it, it is very vague,” Leggard said. “I think it is so important to really go into depth about it and go into the understanding of it as well as just going into the understanding of just gender itself, gender and sex in sports.”

Sophomore Jake Lentz said an aspect of the class that he appreciates is the open discussions Staurowsky encourages.

“We as a department can change the way we can get more women involved in sports media,” Lentz said. “For men, it gives them things to look for that they do without thinking that could be disrespectful towards women in the field. For women, it gives them a safer environment to talk about things.”