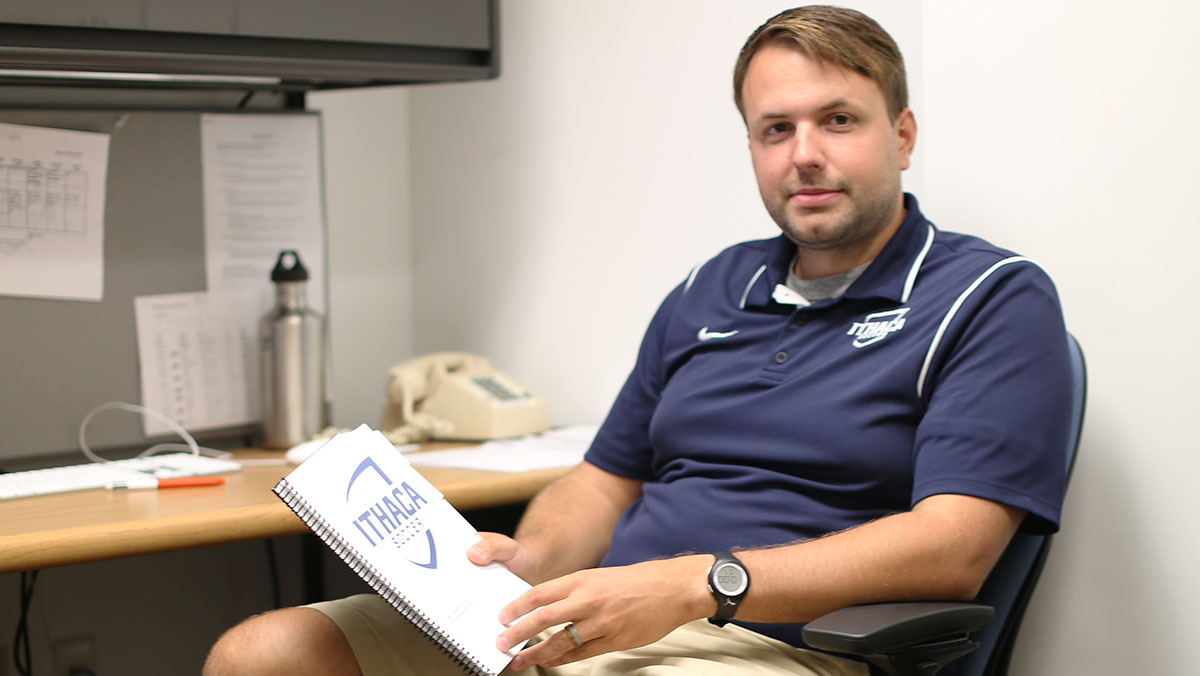 Following former head men’s soccer coach Andy Byrne’s retirement after 31 years at the helm of the program on Feb. 17, assistant coach and former captain Patrick Ouckama ’05 was appointed as the new head coach. This created a vacancy in Ouckama’s former role, and this past summer, Braden Studelska was called upon to fill that responsibility.

Staff Writer Alex Wong spoke with Studelska to discuss his coaching background, how he pursued the position, what he brings to the Bomber program and what he thinks of the future of the program.

Alex Wong: What is your coaching background?

Braden Studelska: I was a student–athlete at Buena Vista University for four years, and after that I was doing some small coaching during that time, with the local high school and some of the youth programs. Then I took a teaching job and was the head boy’s coach at a small Catholic high school for two years. And then the opportunity came to join the staff back where I had played. They had created a full-time assistant position, so I went back there and was there for two years. After my second year I was looking for something different, and this job came along. It was a good fit for me personally, and I think it’s a good fit the other way as well, as far as what I bring to the program.

AW: How has the transition between schools been going? Has it been relatively smooth, or have there been any road bumps along the way?

BS: It’s been fairly smooth. It was a hectic summer getting everything done and getting moved out here, but beyond that it’s been super easy to jump in with Coach Ouckama and the guys. He’s brought me full on with everything going on with the program, and we’ve seen good results with our guys. There’s a lot of excitement going forward with the group of returners we have, and the incoming players as well have shown well. It’s been pretty smooth as far as the soccer side goes.

AW: Have you noticed any similarities or differences between the schools?

BS: The big difference is the size. The school I was coming from is much smaller. When I was a student there it was about 1,200 undergrad, and by the time I left it was sub-900 in terms of undergraduate enrollment on campus. So just the size of the campus and the number of students is really a big difference. I wouldn’t say there is anything good or bad, it’s just different. Things tend to be much more orderly at a big school with set procedures, whereas at a small school it can be much easier to get things done quickly because there wasn’t those set procedures in place because their volume of work they were doing was much smaller. But there’s definitely still a small college feel here, especially with athletics. I get to see all the different coaches at staff meetings and stuff like that, so that culture is still here, so that’s nice as well.

AW: Was the position here something you actively sought out and pursued, or was it something that was presented to you?

BS: It was definitely something I pursued. I was fairly selective about the type of school I was looking at and what type of environment I wanted to join. I applied kind of all over, but after doing some initial research about Ithaca College and looking more into it, it was really a place I could see myself doing well and thriving.

AW: What do you think you can bring to the table as a member of the coaching staff?

BS: A lot of it is just a second pair of eyes. I think Coach Ouckama and myself are relatively similar in how we want to play the game and the ideal of what we want to do, but at the same time we have some differences as well, which is good. We see different things — different things stand out to us. Unity in vision, but a diversity of talents. We both have similar goals in mind and broad ideas of how we’re going to get there, but different things stand out to us that way. I also think I bring some experience. The conference I’m coming from, while probably not as competitive top to bottom as the Empire 8, the top three teams are very talented. Usually, three of them are ranked in the top-25 in the nation, and usually we send two, maybe three teams, to the national tournament. So I think having been exposed to that level of play has been beneficial in how I prepare for teams.

AW: What have you seen so far out of the players, or the program as a whole, that you have liked?

BS: One of the things that stands out to me is the history and the culture. There’s high expectations. There’s that cultural excellence built up over the years through the program. Seeing the way the guys had come into the preseason, the commitment they have to their fitness and technical work during the offseason really bodes well and shows it’s important to them to live up to that standard. They want to do credit to the name on the front of the jersey.  They want to be part of that legacy, I think. And hearing the guys talking about it, that’s something special that is hard to build up in certain places, so that’s been really good to see and something I’m excited to be a part of and continue to cultivate with them.