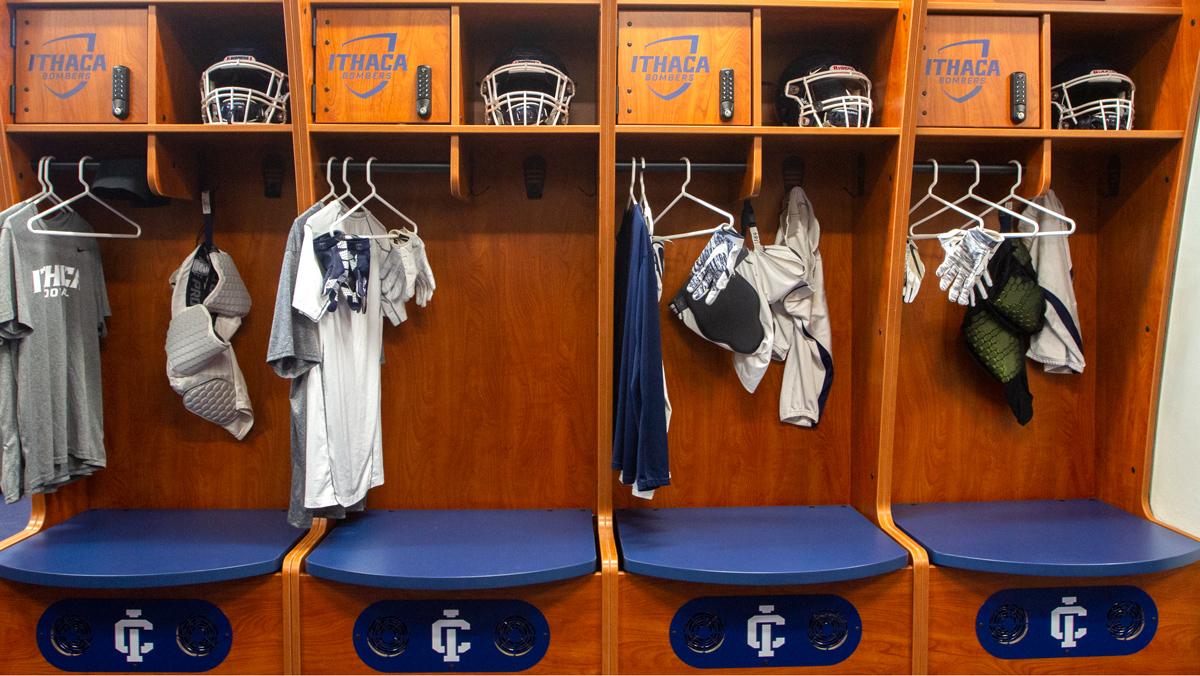 The football team had a nice surprise waiting for them when they arrived on campus for the start of preseason practices: a brand new, state–of–the–art locker room.

The locker room, which is located in Ceracche Center and is shared with the baseball team, was renovated for the first time since the building opened 40 years ago. It joins the Athletic and Events Center, which was opened in 2011, and the Hill Center, which was renovated in 2013, as another top–of–the–line athletic facility, according to Susan Bassett, associate vice president and director of intercollegiate athletics.

“It’s important that we built what we call a sport equity model approach to athletics here,” Bassett said. “We want all student–athletes to have a similar quality of experience through both coaching and access to facilities.”

Until last summer, everything in the locker room was the same as it had been in 1978 when it first opened. The HVAC system and plumbing systems were redone a year ago, and they were funded by the school as part of deferred maintenance needs.

“It had very deficient HVAC system, very deficient plumbing,” Bassett said. “All kinds of issues around that. … It just got to a point where the air flow and the plumbing was just really deficient.”

The idea to renovate the locker rooms was first brought up 10 years ago, but until the HVAC and plumbing systems were updated, Bassett said there was not much the department could do, as because the systems were so old and outdated. After that was completed, Bassett began drawing up plans and contacting alumni for support. The renovation was funded by a few alumni whom the department had worked with in the past. The college would not disclose the cost of the renovations.

“As Ithaca College community members, and personally as an individual committed to the liberal arts with an appreciation for all forms of art, we support the art department.” Basset wrote in an email.

The original locker room consisted of concrete floors and blue, metal lockers, which had since deteriorated to the point where they could no longer be painted over. The redesigned version consists of rubber floors with an Ithaca College Athletics logo in the center. The lockers are organized by player position, and each individual locker is made of wood furnishing and has a locked section with a keypad, space for a helmet, areas to hang up jerseys or other clothes, a padded seat and a bottom storage area for shoes.

“I really can’t put it into words,” senior football captain Pat Minogue, said. “The people who came before us, they made it a standard that it doesn’t matter what it looks like on the inside, it only matters how we play and the brotherhood. But it’s awesome, I’ve never had a locker room like this before and it’s really a Division I–level locker room.”

Carp Wood Field, the main field used by the men’s and women’s soccer teams, also received some improvements over the summer.

A permanent irrigation system was added, which was also funded by donors.

There are two portable irrigation systems, but they have to water all of the fields on campus. By installing a permanent one, it ensures that the field is in the best shape possible at all times.

“I really wanted to put maintenance and care of Wood Field at a higher level because the surface is so important for the sport of soccer,” Bassett said. “You want as true a surface as possible for soccer, so the grass is uniformed and really strong throughout the whole field. Irrigation just helps us keep the growth up there as it needs to be.”

The irrigation system will also be very beneficial when there are back-to-back home games. Junior Justinian Michaels said the field is already noticeably better than it has been in past years and will make for a better playing surface.