All college students struggle to juggle school work, social lives, co-curriculars and countless other activities. This can be especially tough for student-athletes, but for Ithaca College student-athletes who are also part of the athletic training program, the prospect of time management can seem nearly impossible.

According to Todd Lazenby, clinical associate professor in the Department of Exercise and Sport Sciences, there are 18 student-athletes currently enrolled in the athletic training program. In addition to the normal demands of college life, these student-athletes must work around their hours of weekly practice to complete the extensive clinical hours required for the athletic training major.

Rising junior and senior athletic training students are assigned the sports teams that they will assist at the end of the spring semester for the following year. Once school begins, they will work with a team from its preseason through the end of competition to complete one clinical rotation. Once a season has concluded, students either move on to another sport or remain with the team in the offseason for their second rotation. Lazenby said that they spend an average of 20 hours a week completing their clinical hours during a rotation.

Because athletes have a much different schedule than nonathletes, their clinical hours are structured differently. Instead of completing two full semesters of clinical rotation like the other students, Lazenby said athletes typically only participate in their rotations during their offseason. In season, their only requirement is completing three hours in the Hill Center clinic each week, meaning that the offseason is jam-packed so that the athletes still meet the program’s requirements.

“When they’re assigned to teams their junior and senior years, the students are part of the medical care team and the athletic training team,” Lazenby said. “They’re doing tapings, treatments and rehabs with the athletes.”

Athletes in the program must work closely with their coaches and professors to make sure that they are succeeding in their academic area of study as well as in their sport. Lazenby said the program is designed so athletes are able to complete all the requirements as well as focus on their own performances as athletes.

“During their competitive season, that’s when their priority is their sport and their academics,” Lazenby said. “Once their season is done, they have to make the clinical experience the priority over offseason conditioning.”

For many athletes, offseason preparation can be just as important as in-season training. Junior gymnast Paige Landes said that it was critical for her to maintain her skills so she could be just as prepared for the season as her teammates.

According to Landes, she and the rest of her teammates train approximately 15 hours a week during the competitive season as well as the offseason. Year-round training is crucial for athletes to stay in shape and prepare for competition.

“When I came back in November and started training with them, I wanted them to see that I put in the same amount of work that they did,” Landes said. “I wanted to show them that I was just as reliable and just as ready to compete as they were.”

Landes said she and her coach arranged times to train so she could have the same practice regimen as her teammates. Some days Landes would train earlier in the day, and other times it would be after a full day of classes and clinical hours.

This fall was Landes’ first semester completing hands-on clinical hours. She would spend three to four hours every day working with the football team before fall break and then with the indoor track and field team until winter break. She said it was a hard adjustment to make because she felt as though she had to prove that she could handle the heavy load of the athletic training curriculum and other academics while also keeping up with gymnastics.

“It’s hard because [the coaches] want you to be in there as much as you can training with the team and helping them,” Landes said. “It was really hard being excluded from the team, but we worked through it. I just had to show my coach that I could balance it all and that I was willing to work hard.”

Landes said that while the athletic training staff often mentioned the clinical hour requirements and time commitment of working with sports teams, it was still a learning curve once she started to participate.

“You can prepare yourself as much as you want,” Landes said. “There’s still a lot that you have to learn as you go through it.”

Despite the long hours and stressful days, Landes said she would not want to be doing anything else. As a gymnast, Landes takes great pride in her sport and being able to compete at a high level means the world to her. She said she understands how important sports are to other athletes and that helping athletes succeed is worth every minute.

“Some days you don’t think it’s worth it,” Landes said. “But once you hit your goals and see it all play out, it definitely makes everything worth the struggle.”

Because track and field competes during both the winter and spring, Quintana had to choose between competing in the indoor and outdoor season and ended up opting to miss indoor. Quintana said it was difficult for her to miss a season because, like Landes, she did not want to be behind in her training when she returned to the team. 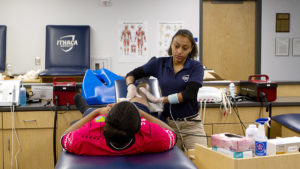 While this is her second year juggling her sport and major, Quintana said that she struggled when she

first began clinical hours. Her first clinical experience junior year working with the football team meant Quintana had to be present for long days of training before the academic year even began.

“It was a shock because, during freshman and sophomore year, we would kind of just put our foot in the water a little bit with one clinical hour,” Quintana said. “Junior year, I started off with football, so I came early for their training, and I didn’t realize that it was eight in the morning to like five at night.”

Quintana has been making up for her absence at team practices by conditioning on her own. She said she lifts on her own and completes the exact workouts that her team did the previous day.

Two days a week, Quintana trains with an assistant coach so she can make sure that she is on track to be prepared for her season. Even with all of her individual training, Quintana said it is not the same as being with her team.

“Last season, I felt like I was a little behind when I came back,” Quintana said. “Even though I train on my own, it’s still not the same as having that consistency of a normal practice.”

Though competing in her sport is important to Quintana, she said her career always takes number one priority. She said that graduating as a certified athletic trainer is why she came to the college, so she takes the program and its requirements very seriously.

Quintana said that when she is in season, she has to find the strength to do her schoolwork even when she feels burnt out.

“With track, we travel every weekend,” Quintana said. “It’s hard to sit on the bus and tell myself, ‘Okay, I have to finish this homework’ when you’re mentally and physically exhausted. You have to find your motivation and just force yourself to get it done.”

All of the time and effort that the athletic training program requires comes with its rewards. For Quintana, getting to know individual athletes and seeing them progress in getting back to their sport is worth all of the stress and exhaustion.

“Once you’re assigned a sport, you become a part of that team that you’re working with,” Quintana said. “Seeing someone that was injured who you’ve been able to rehabilitate to get back, and they do well in their season, is really rewarding to me.”