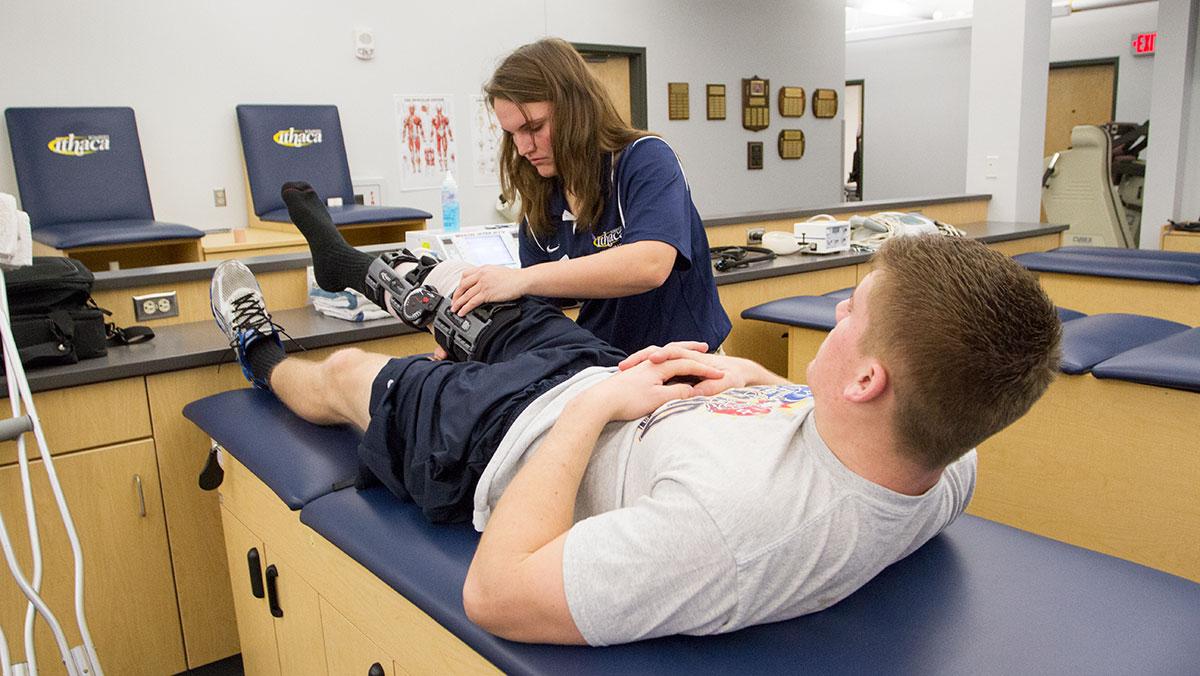 Dressed in a navy blue polo shirt and khaki pants, senior Matt Pinzka stood on the sidelines of a lacrosse game at Ithaca High School last spring. He scanned the field, making sure the players were healthy. As an athletic training major, Pinzka had been trained to prepare for any unexpected injury that could come his way.

One of the players in Ithaca High School’s red and gold uniform went down on the field in pain. Pinzka looked at the school’s head athletic trainer for instruction. The trainer gave him a nod and said, “It’s your time to shine.”

“I got to go out there and immediately there are a million things running through your head … when you just break it down and take your time with it, it’s not that bad,” he said. “That’s when it’s nice to have the preceptors behind you, to kind of slow you down and they’ll correct you if you’re in there.”

Certified supervisors, known as preceptors, oversee the students, making sure they attain the skills necessary to succeed, Paul Geisler, an associate professor and the program director of athletic training education, said.

Under the watchful eye of the preceptors, Pinzka has been working with teams since his sophomore year. Student athletic trainers are on the sidelines at all of the college’s practices and games.

The students’ responsibilities extend further than preparing equipment such as medical kits, water and ice, however. On the field and in the clinic, the athletic trainers must prepare themselves for anything and everything the teams they are overseeing may throw their way.

Geisler said the students tend to see a wide variety of injuries such as stress fractures, concussions and even common illnesses such as the flu. The student trainers, he said, must be prepared for it all as they accept more and more responsibility as their time at the college progresses.

“It’s equivalent to what a physical therapist does when they go on clinical affiliations,” he said. “It’s structured, they have specific things depending on what semester they are in that they are focusing on learning and getting evaluated.”

The hands-on aspect of the program also begins during students’ sophomore year, which consists of an observation period, totaling about 60 hours studying their preceptors and older peers. Then, in their junior year, students spend time rotating among teams throughout the fall, winter and spring seasons. Geisler added that all students will have a rotation off campus at least once, whether it is at Cornell, Ithaca High School or the Cayuga Medical Center.

The program culminates in students’ senior year, when they are ready to take on even more responsibility by leading the way for the underclassmen, Pinzka said.

“As a senior, you’re pretty much the head of the team,” he said. “Obviously you’re still working under your preceptor … they’re always there to help you. But, as a senior, you have a lot more responsibility in regards to setting up for practice, setting up game day, kind of controlling the training room throughout the time.”

By the end of their final year, Geisler said, students are well-rounded through their in-class education coupled with clinical education.

“Our kids are successful because of the challenges we put in front of them: the time constraints, the energy, the knowledge, the way of thinking, the medical way of thinking that we do,” Geisler said. “Our kids here have been treating patients for three years by the time they leave here.”

Geisler said upperclassmen will spend between 15 and 20 hours a week with teams. Pairing that with classes and other extracurricular activities can be a challenge, Geisler said, as many athletic training majors also compete in collegiate sports.

Athletic training majors are allowed to take a semester off if they compete in a varsity sport. For junior Jason Taylor, however, varsity track and field spans two seasons, and therefore Taylor covers a team as he competes as a sprinter. Balancing the two, along with a full class load, brings long days and late nights for Taylor.

“You just get to it when you get to it,” he said. “But on my days off, I go to my own practices and then just check in with Coach when they do the workouts.”

Pinzka said he sees his situation as a wide receiver on the football team, which only competes in the fall, as easier to manage.

Not only is the job time consuming, it can also be intimidating, senior Meaghan Goodheart said.

She said she was terrified during her first experiences with the football team her junior year.

“I don’t really know what specifically I did, but you just kind of have to put on a smile and make your way through it,” Goodheart said, “Eventually an athlete or someone will trust you or you’ll see that you really helped someone, and I think that kind of gives you the little bit of confidence, the little bit of push you need.”

Pinzka said the trainers also have strong relationships with the teams they cover, increasing performance on both ends.

“There is that time where a student comes over to help you and you want to be able to gain their trust,” Pinzka said. “So you can see that kind of trust building after a few times.”

Dan Raymond, head coach of the women’s basketball team, said he believes coaches should build relationships with anybody that influences their team. He said he wants to feel comfortable going to the trainer with concerns about his team.

On the other side of the equation, Katie Lass, sophomore goalkeeper for the field hockey team, said she and her teammates feel they are well-off in the hands of the student athletic trainers.

“I have a good relationship with them and feel comfortable talking to them about anything,” Lass said. “They are always there for us and are willing to answer any of our questions.”

Junior Jenny Zehner said as an athletic trainer, she sees herself as a part of Cornell’s sprint football team, which she worked with in the fall of 2014.

“I think you definitely are more a part of the team than you would expect,” Zehner said, “So I definitely notice myself getting way more into the games than I thought I was going to because I’m not a football fan, but it was my team.”

In short, she said, the students love what they do while providing an invaluable service. Geisler said without them, the college would have a hard time keeping up with all of its sports teams.

“You look at schools in our conference like Elmira, Utica, St. John Fisher that don’t have athletic training programs, they have three or four staff people,” Geisler said. “They are overworked, sometimes 23, 27, 28 teams for three people? Do the math.”

Students are trained on a variety of levels, they are not limited to one path. Each has different aspirations for what they want to do once they leave the college.

Pinzka said he wants to get some more athletic training experience under his belt and eventually work in an emergency room. Taylor said he dreams to one day work for a team in Major League Baseball, while Goodheart said her ultimate goal is to improve the lives of others.

The program’s success can be seen through its alumni as well. Kevin Orloski ’10 said he acquired an internship with the National Football League following his time at the college. Since then, he has worked in minor league baseball, becoming a full-time assistant athletic trainer for an affiliate of the Los Angeles Dodgers.

Megan Kreyling ’12 decided to complete a master’s degree in athletic training from the University of Florida. Now, she works at a Catholic school in Princeton, New Jersey.

Kreyling said her time at Ithaca College gave her an ability that the current students pointed to.

“My confidence was the biggest thing that grew within the AT program at Ithaca,” Kreyling said. “I started off very quiet and nervous but as the years went on, I came out of my shell.”

It all relates back to confidence, and Raymond said he sees that strong confidence within the athletic training students.

“The one thing that I can tell you about our students is that they are excellent,” he said. “You know, they’re very well prepared, they know what to do and they exude confidence.”