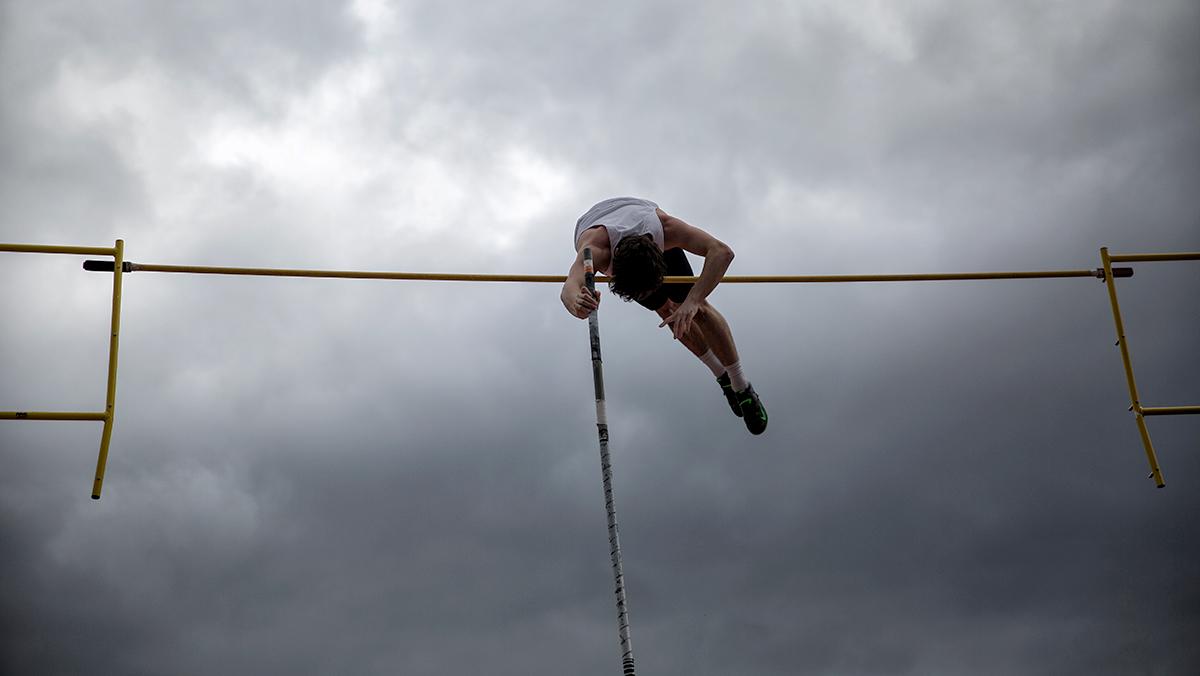 TOMMY BATTISTELLIE/THE ITHACAN
Freshman Joseph Nally competes in the pole vault in the Muhlenberg Invitational on April 1 in Allentown, Pennsylvania. He placed third in the finals with a height of 4.42 meters.
By Madison Bess — Staff Writer
Published: April 26, 2017

Most teams have a balance of competing on home turf and traveling, but the men’s and women’s track and field teams spend most of their time away during the spring season, making their time at home few and far between.

The Bombers have only one home meet, the Tuesday Meet, which is held at Cornell University Women’s track and field head coach Jennifer Potter said, the college does not have a track suitable for outdoor meets. This year’s Tuesday Meet was held April 25.

Though traveling away for the entire season is a large time commitment and involves frequently missing Friday classes, junior distance runner Taryn Cordani said being away so often adds excitement.

“I am lucky enough to race at some really cool places like Bucknell, Penn Relays and The Armory in New York City,” Cordani said.

At Bucknell on April 14, Cordani took fourth overall in the 5,000-meter run with a time of 16 minutes and 35.71 seconds. This time was faster than that of 15 NCAA Division I runners. She broke her own school record she had set last year by nearly 21 seconds.

During her freshman year, Cordani said she used to think the constant travel impacted her life negatively because she felt like she was missing out on the college experience.

“Now, I think traveling with my teammates improves my social life because I get to go to all of these cool places with my best friends,” she said. “We are all so close because of the amount of time we spend together.”

Cordani said she feels that she is not missing out on anything and that she feels lucky to be competing.

“Some kids are at Moonies on a Friday night,” she said. “I’m racing a 10K under the lights at Penn Relays with my best friends cheering me on.”

Freshman pole–vaulter Joey Nally said that because of the time commitment, he has to manage his time more diligently than if he were not doing a sport.

“I did sports in high school, so I have a general sense of what it’s like to balance schoolwork and sports,” he said. “Personally, it drives me to work harder.”

As far as schoolwork goes, Cordani said she has been able to plan ahead and manage.

“It easily could impact it,” she said. “I miss a lot of school, especially Friday classes. It can be overwhelming, but I can handle it.”

Nally said the coaches are a big help when athletes are trying to fit in their schoolwork and get everything done.

“My coaches are always willing to work with my schedule if I have a big exam or something,” Nally said.

Furthermore, if necessary, Potter said the athletes will take their exams at hotels if races interfere with their schoolwork.

“We usually have myself or one of the assistants proctor the exams on the road,” Potter said. “We make arrangements with the professors on when and how they are given. They get them back either when we are back on campus or in an email.”

Sometimes athletes cannot get out of class on Friday, which means they would have to miss the meet, Potter said.

“They are able to use Wi-Fi on the bus and in hotel rooms,” she said. “We occasionally miss a day of class, but it’s no different than any other [sport]. They missed a Friday of classes, and most of those got their schoolwork in. If they can’t miss school, they don’t go.”

Cordani said the indoor season is a lot less stressful than the outdoor season.

“It is definitely easier to stay on top of things since our meets are at home,” she said. “More girls get to compete because we don’t have to pay for hotel rooms and food at home meets.”

During the outdoor season in the spring, Cordani said, schoolwork is more stressful.

“With classes ending and final projects needing to get done, I get way more stressed out,” she said.

Nally said he likes the outdoor season more but that outdoor is more mentally daunting than indoor.

“Indoor, in my case, just means that I have no wind, rain or temperature affecting my jump,” he said.

“I love being in the elements and vaulting with the beautiful sun or sunless sky,” he said. “It doesn’t matter to me at all. As long as I get a nice tan, I will be content.”