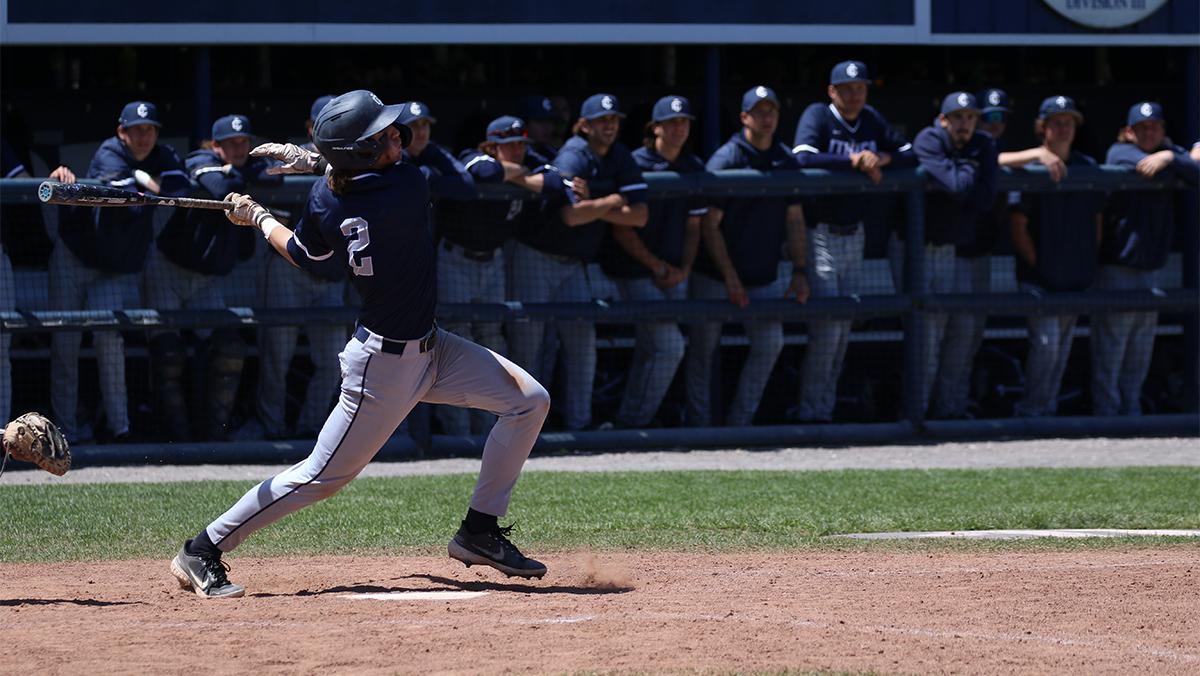 Nolan Saunders/The Ithacan
From left, freshman infielder Connor Pedersen gets a hit in the Ithaca College baseball team's May 7 win over Union College in the Liberty League Crossover series. The Bombers lost to Catholic University twice May 28 to lose in the NCAA Super Regional.
By Laura Ilioaei — Staff Writer
Published: June 3, 2022

The Ithaca College baseball team lost to the Catholic University Cardinals in a series May 28 and 29 in the NCAA Super Regional at Freeman Field. It was the first time in program history that the team had made it to the Super Regional.

The games were initially scheduled for May 27 and 28, but a thunderstorm delayed them to May 28 and 29. Regardless, it remained that the matches would consist of a best-of-three series, with the third game happening just after game two if necessary.

In the bottom of the seventh inning, junior infielder Mike Nauta scored on a throwing error after stealing third to push the lead to 3–0. The scoring capped off with junior infielder Matt Fabian hitting a double down the line, driving in freshman infielder Connor Pedersen.

Senior pitcher Kyle Lambert, who set a single-season program record for strikeouts during the game with 96, the previous record being 93 strikeouts, pitched eight innings and allowed just four hits. Lambert said in a post-game press conference that the effectiveness of his slider helped him perform so well.

“I was able to locate that, put it pretty much wherever I wanted,” Lambert said. “Just commanding the zone was a big thing for me, only one walk. I usually struggle when I start walking people, so being able to command the zone was very helpful.”

Shirley starred on the offense, having been responsible for two of the runs. Though he knew Cardinals’ junior pitcher Tucker Alch is a reputable player, Shirley said the Bombers were not discouraged.

“This just comes from our preparation from day one,” Shirley said. “We knew this guy was gonna come out and throw. It starts with the coaches, we ramped up the machine pretty high and obviously got our timing down and tried to work the middle of the field. That’s what helped me today.”

However, the Bombers were not able to maintain their momentum in the following match. The Cardinals scored four runs in the third inning to make it 4–0. Initially the Bombers began to catch up, with two runs scored by Shirley and Nauta in the sixth inning, and two runs scored by Fabian and sophomore infielder Ethan Rothstein in the seventh inning to make it 5–4 Cardinals going into the eighth inning.

But the Cardinals scored two more runs in the eighth and the Bombers left the bases loaded in the ninth to give the game a final score of 7–4, evening out the series 1–1.

Any hope of the Bombers advancing to the NCAA National Championship in Ceder Rapids, Iowa, was gone early in game three. The team was quashed further in the determining match, as the Cardinals scored 10 runs in the first three innings, including a grand slam in the second. Meanwhile, the Bombers scored a single run in the second inning from Pedersen, leaving the score at 10–1 through five innings.

The Cardinals then proceeded to score six more runs from the sixth to the eighth innings, and although the Bombers’ sophomore infielder Louis Fabbo scored a second run for the team in the ninth, the game ended with a score of 16–2, sending the Cardinals to the National Championship.

Although the Bombers will not move on to Ceder Rapids, Iowa, for the NCAA Division III National Championship, they have still set a commendable standard for future seasons. Despite the way in which the season ended, the Bombers had an impressive bounce back season after two years where the program saw little success. Junior catcher Gil Merod said his goal was to win at least 30 games this season, which the Bombers did and then some, finishing the season with 34 wins, the highest total for the team since 2013. That was also the last time the Bombers made the NCAA National Championship, which the team was one win away from this season.