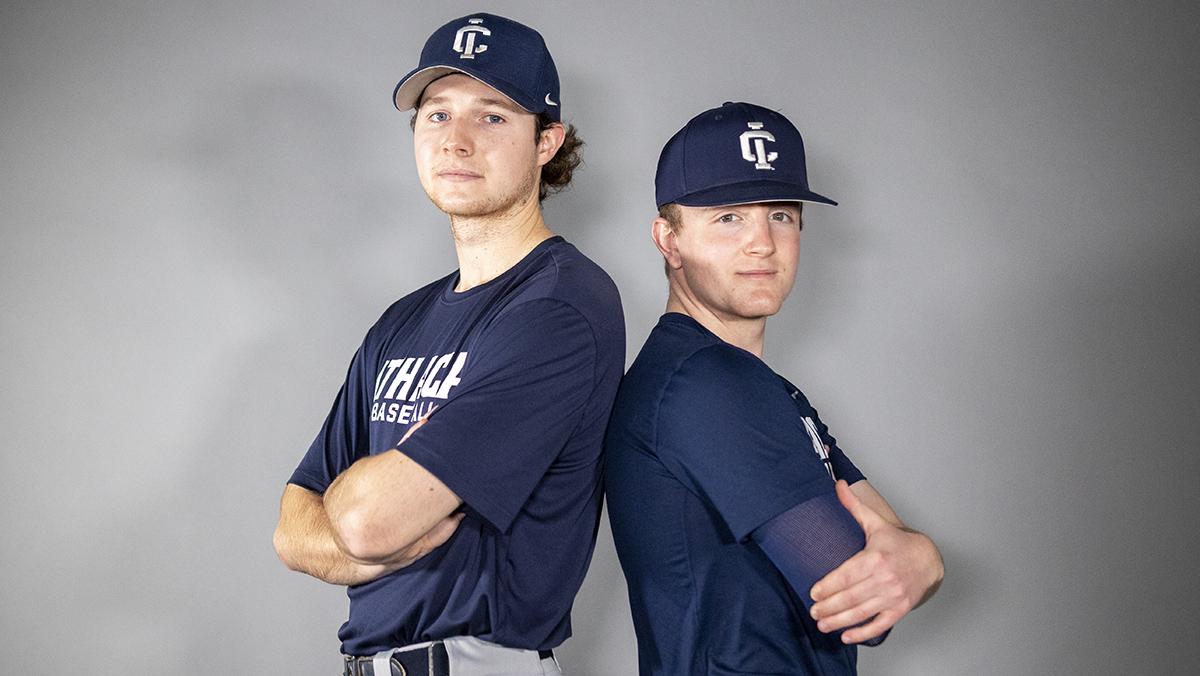 The Ithaca College baseball team has made its return to the diamond and has high expectations for the 2022 season. This spring, the club is eyeing a Liberty League title and a trip to the NCAA tournament.

Last season was head coach David Valesente’s first full year in charge after the 2020 season was cut short because of the COVID-19 pandemic. Valesente said he expects his team to pick up where it left off and improve from last year, which entails winning the Liberty League and competing in the NCAA tournament. He also wants his team to excel on and off the field.

“Our goals are to build off of last year’s return to play and continue to compete at a high level,” Valesente said. “Our goal is also to keep players healthy and to keep them on task for success in the classroom.”

In 2021, the Bombers finished third in the Liberty League with a 16–12–1 record. The club posted some impressive numbers during the campaign, leading the league in pitching with a league-best 5.00 earned run average (ERA). The team’s bats also tied for the third-best batting average in the league, collectively hitting .302.

The team recently began preparation for the 2022 season; it attended training sessions and participated in early–morning and late–night practices in February. After participating in those team sessions, senior pitcher Kyle Lambert feels much better about the team dynamic compared to last season.

“I think this season will be different because this year, the team feels different,” Lambert said. “It feels like … we all have great team chemistry, we’re all very connected, we’re all very close. I think that’ll be a big difference for us this year when it comes to the season.”

Lambert was solid for the Bombers last spring, striking out 43 batters while recording a 3.54 ERA.

Junior catcher Gil Merod is also planning on breaking individual records and earning accolades of his own this season, which include recording a higher batting average and earning an all-league or all-region acknowledgment. Merod impressed in 2021, logging a .333 batting average with 12 RBIs and 12 runs scored.

However, Merod also said he wants his team to improve and put more tallies in the win column.

“I know last year we lost games pretty weekly and we gave up some runs,” Merod said. “I would say a minimum of 30 [wins]. That’s a doable task that would show the talent we have, the powerhouse that Ithaca [College] should return back to be.”

Merod also wants him and his team to minimize mistakes that his team made last year, including errors and walks. But regardless of the end results, he said he still hopes the team can improve on the tactical aspects of the game, so it is better for years to come.

Merod also said team chemistry is important, noting that there is a more positive atmosphere among everyone on the roster.

“We have great chemistry and everybody seems to get along,” Merod said. “It just seems like everybody’s on the same level playing field.”

Valesente is also very optimistic of the young freshman talent coming onto the roster and he hopes to see them contribute significantly this year.

“We have a potential shortstop of two freshmen, Connor Pederson and Riley Brawdy, who will be filling in for former shortstop Jack Lynch, who has continued his playing career at Manhattan College,” Valesente said.

This season will look a lot different from the past two seasons but back to normal overall because there will be a more usual spring baseball schedule compared to the ones during the beginning of the COVID-19 pandemic. The team has two preseason trips planned before the spring break trip, which Valesente said will help it better prepare for the upcoming season.

“Things are going according to plan,” Valesente added. “We’re excited to play games out of conference and I think the travel requirements and travel overnight restrictions from last year are a little bit looser this year.”

Merod also said he admires the amount of depth on the roster because he feels everyone is ready to step up at any given moment.

“We have such talent that even our what you consider backups are just as strong as our starting lineup,” Merod said. “So it just seems nice that if anything were to happen [to] anybody there’s just somebody that can step right up and there’s no issues.”

Valesente does not want his team’s focus to change each game based on whoever it plays this season, noting that each game is just as important.

“I’d like to really focus on playing against the game,” Valesente said. “We don’t care who we play. Day in and day out, whether it’s the best team in the country or the worst, we’re playing against the game. For us to be successful, I want us to do the little things. To have a quality pitcher, to have quality at-bats, beat tough outs, play with high enthusiasm and energy, and control our emotions when things aren’t going well.”

The Bombers officially kicked off their season Feb. 25 in a 5–4 walk-off victory against SUNY New Paltz. The club will not be taking the diamond at Freeman Field until March 30 when it takes on Elmira College.