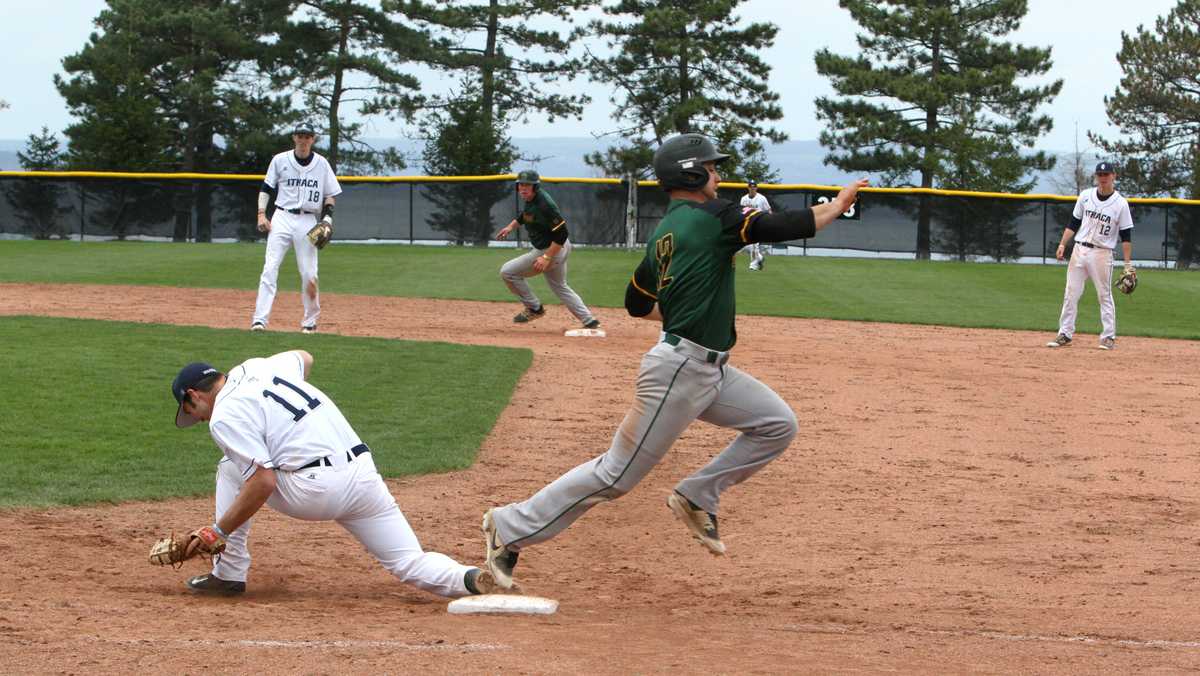 The Ithaca College baseball team defeated The College at Brockport on Senior Day 15–3, but fell to the Rochester Institute of Technology 6–3 April 28. 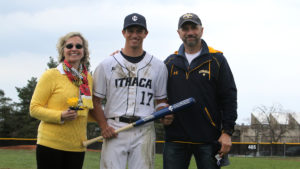 The Bombers got things started in the first inning when junior designated hitter Jake Generali hit a popup to center field, but it was dropped, causing junior first baseman Andrew Bailey and junior second baseman Webb Little to score, putting the Blue and Gold up 2–0. 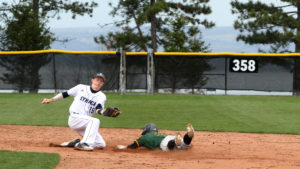 Freshman shortstop Jack Lynch tags out the runner at second base during the college’s win over The College at Brockport.

After Brockport put up one run in the fourth, the Blue and Gold scored five unanswered runs in the fourth and fifth innings, including a three-run double by Bailey to score Webb Little, senior left fielder Domenic Boresta and sophomore catcher Andrew Wollner to put the South Hill squad up 11–2.

Brockport scored one more run throughout the game, but the Blue and Gold scored four more to cap off the 15–3 win. Bailey went 4–4 on the day with five RBIs while Carey went 2–3.

In the second game of the day against RIT, the Tigers jumped on the scoreboard first when senior first baseman Ben Terzini singled to left field to score sophomore second baseman Navada Waterman.

In the bottom of the first, the Blue and Gold tied the game when Generali singled to shortstop to score Webb Little.

In the third, the Tigers scored two runs to extend the lead to 3–1. Later in the inning, junior pitcher Daniel Zeglen hit a three-run homerun to make the lead 5–1. After another run in the fourth, the Tigers led the Bombers 6–1. 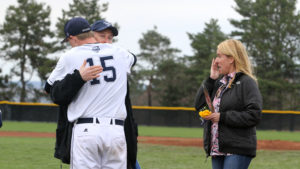 In the bottom of the fifth, Lynch singled down the right field line to score Carey, cutting the deficit to 6–2. In the bottom of the seventh, the Bombers tried one last time to complete a comeback. Boresta walked with the bases loaded, causing freshman pinch hitter Garrett Callaghan to score, but the South Hill squad never scored any more runs.

The Blue and Gold will play SUNY New Paltz at 4 p.m. May 1 at Freeman Field.

Baseball holds on to upset No. 24 Oswego State