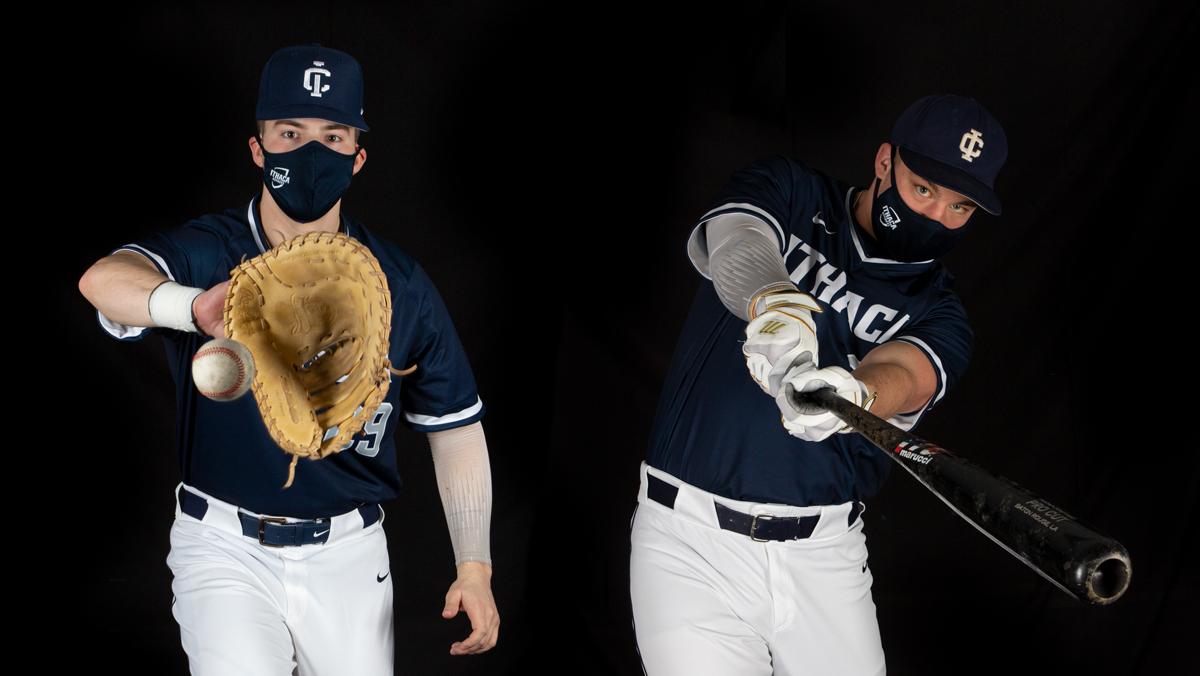 Ash Bailot/The Ithacan
Senior Garrett Callaghan and first-year graduate student Buzz Shirley said they are prepared to get back to competition and establish the Bombers as a contender in the Liberty League
By Tommy Mumau — Staff Writer
Published: March 25, 2021

After a year of anticipation, the Ithaca College baseball team is back on the diamond, resuming competition with a determined club and several new faces.

When the season was suspended last spring, head coach David Valesente was in the midst of his first season at the helm for the Bombers. Valesente said that he was excited to hear that his program would have the opportunity to return to action and that he looks forward to the opportunity ahead.

“We were thrilled,” Valesente said. “We’ve been waiting for that news for a year. … We really feel like we’re in a safe place to be able to compete.”

The team returned to campus in January and began by training indoors for a potential season. These workouts have taken place in pods by position to limit the number of players that are in a space at a given time. Valesente and first-year graduate student Buzz Shirley both acknowledged that these protocols have made it difficult to develop a sense of familiarity among the team early on.

“People don’t understand [that] in baseball, there’s a huge aspect of team chemistry even though it’s an individual game,” Shirley said. “You’ve got to get along and mesh together now, before you start playing games. Right now, that’s what we’ve had to get used to. The chemistry’s going to be a little off. Hopefully the first couple games we can figure that out.”

Senior Garrett Callaghan, outfielder and captain of the team, said Valesente has done his best to prepare the team for this unusual season by leaning on the upperclassmen to be leaders for the rest of the players. The team has held practices outside on Valesente Diamond at Freeman Field. Callaghan said the team is eager to get back on the field and return to competition.

“We’re just pumped to be playing,” Callaghan said. “It gets a little bit tiring practicing inside. We’re just really excited to get going on the field and playing against some outside competition other than ourselves.”

During Callaghan’s last full season in 2019, he logged a .366 batting average with 40 hits and 19 RBI. Callaghan said he was able to use the time away from the team to better his game.

“On a personal level, I think I was able to get further ahead than a lot of other people this year because when we went home to quarantine, I had access to some facilities,” Callaghan said. “From an individual perspective, I set my goals a little bit higher than I normally would have for a regular year.”

Valesente also said he expects Shirley, one of the three team captains, to be a key contributor in 2021. Shirley will spend time both at first base and on the mound this season and will look to build on his success from the abbreviated 2020 season. In the club’s seven games last season, he hit .433 while picking up 13 hits and driving in six runs.

Valesente will also rely on senior Jack Lynch, shortstop and captain of the team, to play a pivotal role for this year’s squad. In last year’s shortened campaign, the shortstop hit .300 with nine hits and four doubles in the Bombers’ seven games.

Along with the team’s three captains, the club also expects to rely on some of their freshmen to make an impact. Valesente said he is particularly looking forward to seeing freshman infielders Kyle Gordon and Alex Barker-Hook and freshman pitchers Dom Trippi and Matteo Ragusa make their collegiate debuts this season.

This young team will play a rather demanding slate of games, despite the schedule being shortened to just 29 regular season games. The South Hill squad will mostly play doubleheaders every Saturday and Sunday.

This will also be the first full season that the program has competed in the Liberty League, meaning they will face several new opponents this season. The club will be playing primarily a conference-based schedule, including a few games against other local programs.

While facing new opponents and entering a new league may present some challenges for the program, Callaghan said the team simply looks forward to having the opportunity to face outside competition.

“Any game that we’re playing as a team, we’re beyond excited for,” Callaghan said. “We’re just really putting our head down and looking forward to getting going. Baseball is baseball, no matter who you’re playing.”

Valesente said he is looking forward to his squad returning to play, as the Bombers will look to make their presence felt in the Liberty League this season.

“We’re expecting a hard-nosed, gritty club that’s going to play every day like they haven’t played in a year,” Valesente said. “The guys are hungry, they want to play and are anxious, and we’re excited to see them get out there and start doing it.”